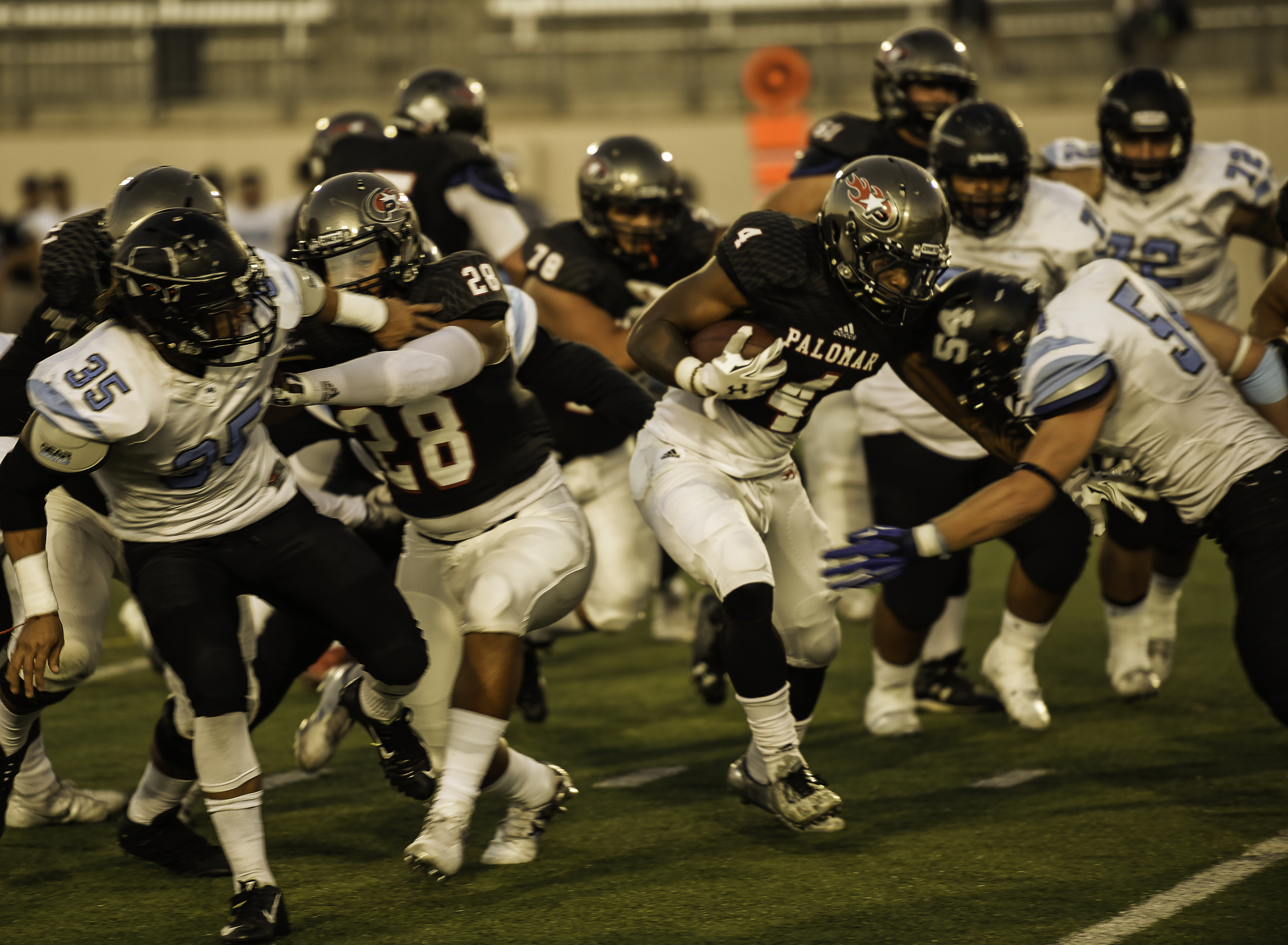 Palomar falls to Moorpark despite comeback after half

Moorpark started the game off ahead of the Comets, but Palomar made a late game comeback that fell short with a final score of 31-26, which puts them at a 1-3 record to start the season.

“We need to improve on getting into the win column,” said Head Coach Joe Early. “We played well in spurts, but the times we didn’t play well, it showed, and that’s the difference in the game. We had things going, we dropped a pass, or we would miss a block, miss a tackle, or had an untimely penalty. Those things we have to continually practice so they don’t happen in a game.”

Moorpark was the first to score after a slow start for both offenses, but Palomar defensive back, Dominique Love, recovered a fumble and took it 50 yards into the end zone for a Comets touchdown.

Freshman quarterback Matt Romero, is an Oceanside High School alumni and ended the game with a total of 242 yards and two touchdowns.

Romero struggled to connect with his receivers in the first half, but bounced back in the second half leading to one of the main reasons to Palomar’s late game comeback.

Wide receiver, LaMont Chaney, was Romero’s key receiver in the game, with 62 receiving yards over seven receptions with his longest reception going 17 yards.

“As a team offensively, we need to read a little bit better, but that’s no fault on him, so I think he’s doing pretty well,” said Chaney.

Defensive back, Malavai Taylor, made a major contribution for the Comets defense finishing with six solo and two assisted tackles. Taylor is an Oceanside High School alumni as well, entering his sophomore year at Palomar.

“I didn’t do as well as I should be doing,” said Taylor. “I definitely improved, that’s every game. I missed a couple of tackles I should of made the play on, but that’s just a work in progress.”

Josh Bernard, is a freshman coming out of Oceanside High School like Romero and Chaney. Bernard is the starting running back for Palomar entering his first season. Bernard started his fourth game of the season, finishing the night with a solid 79 rushing yards in 19 carries as well as 65 kick return yards.

“I thought my carries went fairly well,” said Bernard. “The offensive line, they picked it up in the second half. Opened some holes for me and I just executed.”

At the end of the Comets’ late game comeback, Romero connected with tight end, Robert Ursua, bringing the score to 31-26 Moorpark. After Ursua’s touchdown reception, the Comets failed to pick up a two point conversion to bring Palomar within a field goal of tying.

The Comets’ are playing on the road on Oct. 1, followed by a bye week, then proceeding back to Escondido High School for their next home game on Saturday Oct. 15 against Orange Coast at 6 p.m.