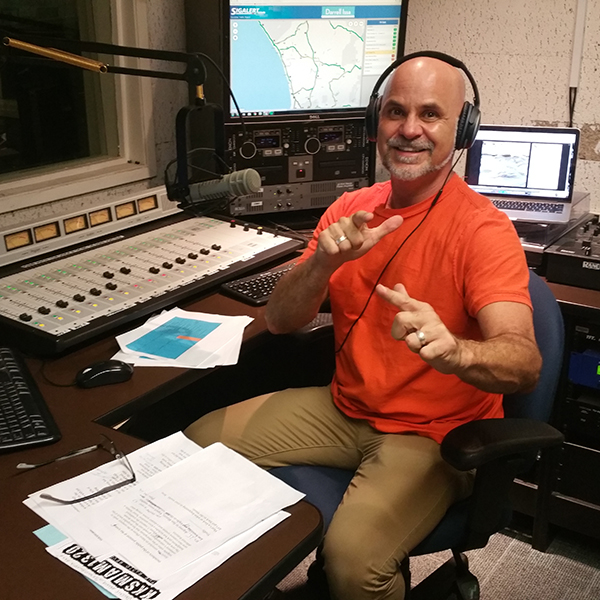 Palomar’s DJ Roob keeps it “Not So Serious” on air 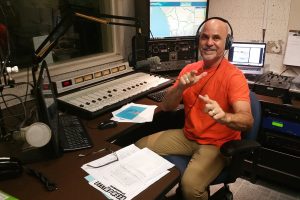 If you’ve ever bemoaned the radio for only playing the same few songs over and over again, or only playing whatever’s topping the charts, the relief to your woes lies in “Not So Serious Radio.”

Here at Palomar, we have our own radio station called KKSM. You can listen to it on a.m. station 1320, access it on Palomar’s website by searching KKSM or even tune in on your mobile device.

KKSM hosts a huge number of programs produced by students who attend class at Palomar. One such student is Rob Blackwell, known as to his listeners as DJ Roob, host of “Not So Serious Radio.”

“Not So Serious Radio” plays from 6 to 9 p.m. every Wednesday night, and is a peaceful exploration of new, old, and local music.

Blackwell begins his show plugging in cords, sliding dials, shuffling papers, all before settling into a pose not all that unlike a lineman’s three-point stance. It is easy to see the professional described by radio station general manager Zeb Navarro.

“He was the real driving force behind us playing the Leucadia music festival,” Navarro says, mentioning the Summer Fun on the 101 festival, from which “Not So Serious Radio” broadcast this last June. “That was huge for us.”

Blackwell has the practiced demeanor of a seasoned entertainer, putting in 10 hours of prep for each three-hour broadcast. This kind of dedication is thanks to the Radio Production class (DBA 130) in the Digital Broadcasting Arts department, he said. Blackwell took that class in Fall of 2015 and said it gave him “an overview of the world of radio broadcasting,” and provided a hands-on experience in running KKSM, an FCC-licensed station.

While Blackwell, 52, has only been active on the radio here at Palomar since January of this year, his decades of experience loving and exploring music have equipped him with a massive collection of songs from a myriad of unique artists.

Listeners can expect to hear music spanning all genres. In his own words, “rock, blues, hip-hop (especially old school), electronic, funk, reggae, world, etc.” An impressively wide net already, he added, “oldies, classic rock, gospel and more.” Eclectic music fans are sure to be impressed by such a wide variety.

Blackwell even devotes a part of every show to music by local San Diego artists.

“My goal is to provide another vehicle for the artists I feature to promote their work,”

Navarro was quick to praise Blackwell for “giving local bands exposure,” saying he was “glad to have a show that highlights local music running out of Palomar.”

Blackwell added, “There’s a lot of fantastic music being made in this town.”

Don’t just take his word for it. Listen in and follow “Not So Serious Radio” on Facebook, and join DJ Roob as he takes us all on a beautiful adventure through the exciting history of underappreciated, underexposed music.