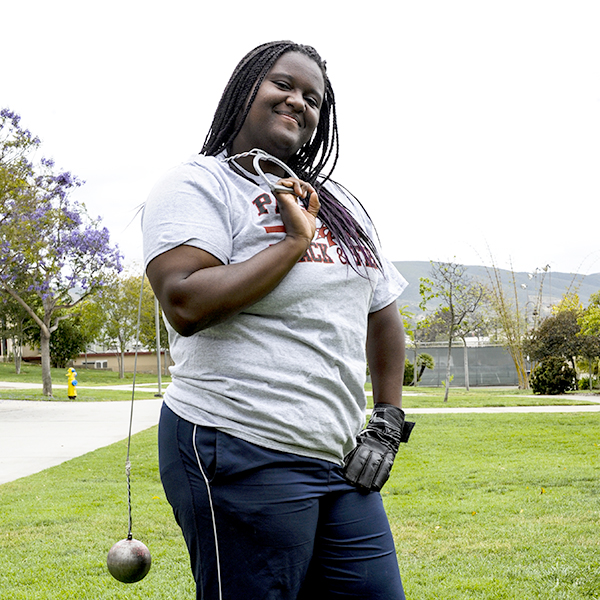 Riley Chapman and Deondra Young have risen above the challenges to help bring their team to the forefront of success.

A team that rose to the occasion still had to overcome several obstacles. Chapman and Young agree that the season required extra dedication.

“I always have a motivation…medals (are) a huge motivation for me. If top six get medals, I’ll make sure I’m in that top six no matter what. I have 46 medals now,” Chapman said.

Specialties set people apart from the pack. Young keeps many special techniques in her arsenal, but said that one proved most effective during the intense moments.

“Hammer is definitely the hardest…it’s really hard to put it all together. You have to trust your body knows what it’s doing,” Young said.

Young’s Hammer ability has proved effective as she lead the team into the finals. During the Southern California Community College Track & Field Prelims, Young threw a season high of 173 feet.

This coming Fall semester will be different for the team, as Chapman will be assuming a different role and Young is set to transfer to Long Beach State on a scholarship. Young said she is hopeful that the team obtains more throwers to keep their positive streak going once she leaves.

“I know that the throws coach can really condition them, and get them to where they need to be, to where they’ll be a great asset to the team,” Young said.

Both runners admitted the team is held together by the encouragement of their head coach, Jennifer Williams.

Ending the season with the win, was a very important thing to Young , who could only speak highly of the entire team and their work ethic.

“I’m so proud of us because no one really believed that we could do it, because we are a really small team and because it hasn’t happened in like eight years or so. Just knowing that we all contributed to getting that win (is the best),” Young said.

During the 2015 season, Young also was the Pacific Coast Athletic Conference Field Athlete as well as the Southern California Community College finalist placing second in both the hammer throw and shot put. During the CCCAA State Championships in San Mateo She placed ninth in the shot put. One of Young’s career goal is to become a Clinical phycologist.