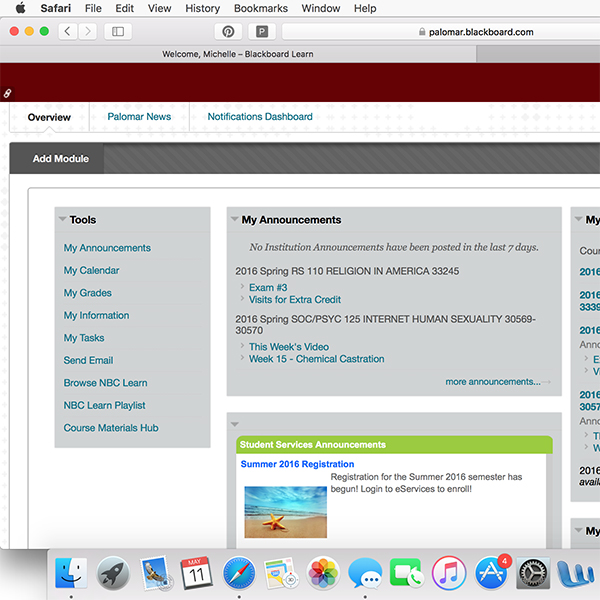 Blackboard could be replaced

Blackboard could be removed in the coming semesters, and its replacement is a bit of a big-shot, well lets just say it has the backing of California’s Governor.

Palomar has been looking to replace Blackboard, the online education tool that the college is currently licensed with, to join a nationwide movement to a new, more universal service.

California Gov. Jerry Brown has helped fund a new program to benefit colleges and expand the online learning environments for community colleges across the state.

“This is a pilot program. Right now a selected group of community colleges (within the state) are participating in this initiative to get an online college on top of our physical colleges,” Payn said.

Palomar, although it is not part of the 10 schools under the initiative, will be initiating its own change. The new service, Canvas, will allow students from Palomar to enroll online in specific courses available at other college campuses, while still maintaining credit at Palomar.

“Any student in the state could sign up for a course that is standard, so there is no discrepancy about content. It would probably not be all classes, but especially the ones that are really holding people back from graduating in two years,” Payn said.

The Canvas service is similar to Blackboard, but as with any type of change, there are some different ways of going about the set up. Payn said to ease the college into the potential transition, only a select number of instructors are testing the platform.

“Our Canvas pilot is with 10 instructors and 10 courses. We have a rigorous research plan to collect information about this pilot. We have face-to-face classes, hybrid classes and online classes,” Payn said.

To fully grasp the abilities of Canvas the college is testing out a verity of subjects including: Mathematics, Multi-Cultural and Graphic Communications courses. The college will also be comparing students’ course performance in Canvas to that of Blackboard.

The ultimate goal with Canvas is to provide an enhanced learning experience for students and to completely transition from Blackboard.

Associate Professor of Kinesiology and Healthy, Kelly Falcone, is one of the instructors testing out the Canvas service with her students. Falcone admits there were challenges when testing out the service initially, however, she has grown to understand the fundamentals of the service and its benefit for students.

“After the initial learning curve … I found it easy to learn. I do think Canvas provides a better experience for students,” Falcone said, via email.

Falcone also said that when compared to Palomar’s current Blackboard service, Canvas offers more ways for students to connect with each other, making the learning environment much more cohesive.

“Canvas integrates with Google Drive … (and) also provides a way for groups to be able to meet online through video/voice/text and it seems as though several student groups have … found it to be easy. Canvas is really good at reminding students to complete their work, which I think is helpful,” Falcone said.

Palomar faculty will be heavily involved in driving the official decision, as to whether the college will eventually move forward with the program full-time.

“This is a faculty-driven decision … the faculty has not made the decision to adopt (Canvas). In the event we make the decision, it is going to be … a two to three year transition period,” Payn said.

On April 28, the Academic Technology Committee voted to extend the Canvas pilot, which would allow faculty to test out the service through the Fall semester. The campus staff want to focus on more than just 10 courses to move forward with the decision of utilizing the Canvas service on a full-time basis.

According to Payn there are currently around 260 to 300 students in the study.