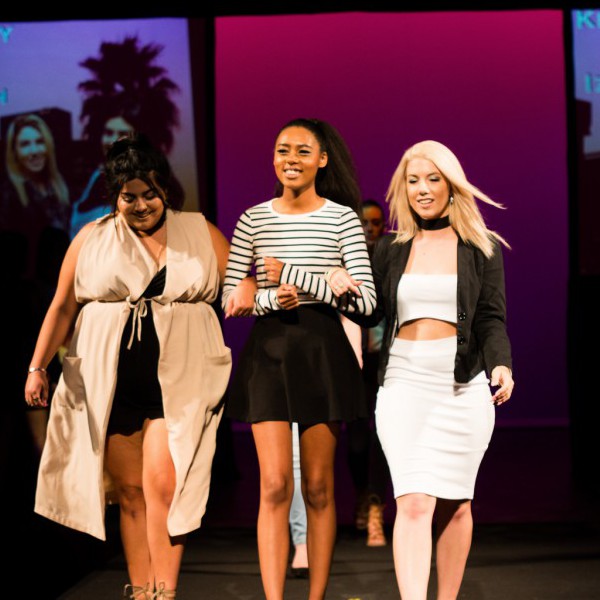 A proud night for fashion students

Fashion is a form of art and the runway is its gallery. Palomar College put on its annual fashion show to display the art styles of its fashion students.

Designers, merchandisers, and producers made their debut at the MODA fashion show, showcasing their take on this season’s fashion. This year’s theme was “Express Yourself,” and the designers showed that in their work.

Fashion Design student Mina Shelton, said that she believes the show is different from past shows because there are different kinds of creativity and everyone is bringing a part of him or herself in it. She designed a single outfit for the show and brought her childhood into the design.

“The dress I designed is pink and it has cherry blossom flowers because it’s based off an old kimono I wore when I was younger because I am half Japanese,” Shelton said. “At a cherry blossom festival, me and my family would always dress up when we would go to the event.”

Shelton wasn’t the only designer whose inspiration came from her family and childhood. Rachel Madison’s collection was inspired by her dad and music taste. This is now Madison’s fourth full collection show and she said that the MODA show went really well from what she could see backstage.

Behind the scenes, Saralyn Strafford, a fashion design and merchandising student, helped put the entire show together and made sure everything went smoothly. She said that everyone in the fashion show class chooses a certain group that piques their interest. They do jobs such as casting models, staging and working the VIP area, depending what group they are in.

Strafford was “super happy” with how the show turned out. “It was everything we hoped for and it was better than last year,” she said. “I hope we set high standards for next year’s class.”

Model Nohely Llamas, 19, modeled in last year’s fashion show as well as this year’s. She said, after the show, that she had a lot of fun and met new, interesting people. She said that she believed this year there was a lot more thought put into the production, outfits and even hair and makeup.

The fashion show used models of all races, shapes, sizes and heights. Everyone was welcomed to try out and no one needed previous experience. They wanted to make anyone to feel like a model for the night.

This year’s show was well-planned out and all the student’s hard work paid off. There was live music and dancing at the show; all performed by students. Leonard Simpson, fashion guru and founder of Fashion Forward, was the guest speaker and introduced the show.

“If you have immense joy, you pull that into what you’re doing,” Simpson said.

“We didn’t think we were going to have a show.” Strafford said. “It was getting towards the end of the year and there was still a lot of work to do, but everyone pulled together and we ended up succeeding.”