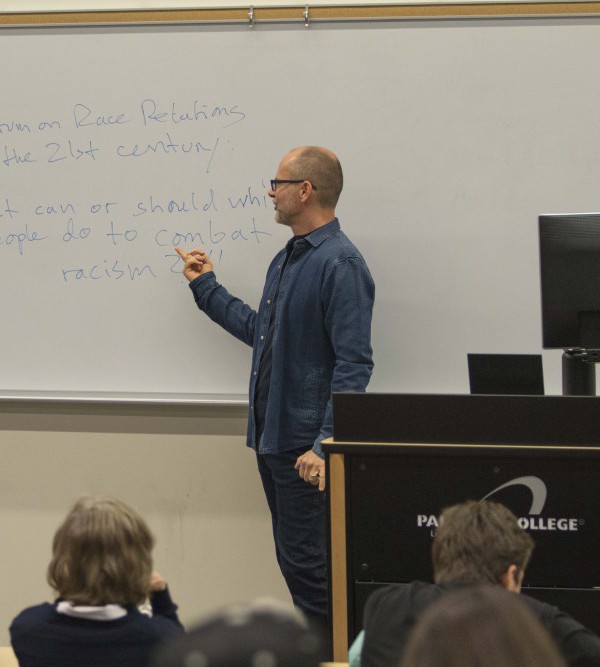 Students argue how to combat racism in race relations discussion

The Multicultural Studies Department, including classes such as Africana and Chicano/a studies, invited the campus to join them in a race relations discussion in the 21st century, open to students and faculty on March 30. in building MD-157.

This is third time the department has held this school-wide forum, each time focusing on a different aspect of tackling racism. The discussion was led by Palomar professor Martin Juptok who brought up the question: “What should and can white people do to combat racism?”

When selecting the question to shape the discussion, Juptok suggested he heavily relied on the recurrence of racist rhetoric occurring in the last two years.

In hopes to uncover the reality of the implications of racial rhetoric, attendees were encouraged to discuss their opinions on how to address racial issues while including whites within the conversation.

“There’s an inherent need to talk about these issues, if anything the need is getting bigger…too often we tend to talk about racism as if somehow it’s the job of the victims of racism to do something about it or do away with it,” Juptok said in his introduction.

Highlights of the discussion pertained to education, leveraging media to combat race issues instead of breeding them, and the use of voting rights to change the structure of institutionalized racism.

Opinions and personal experiences dictated the flow of conversation, most attendees brought up questions concerning what age education of racism should be introduced, and even if racial issues can be solved simply with education alone.

“It’s a really difficult question to answer, being a triple minority I guess you can say I sometimes feel bad for white people,” Student Vanessa Maldonado said. “I think it’s really hard because I have friends, they go out of their way to do things a little differently and to try to lower stereotypes but sometimes even then it seems condescending when they do that. And it’s hard. I see it from both sides.”

Student Jace Kuske, also agreed that although the platform should be given to the minorities themselves to speak up on racial issues, the progressive change won’t happen until those who have the platform now raise awareness.

Overall the discussion did not lead to an ultimate answer, although the students on campus continue to bring suggestions and drive these types of conversations forward.