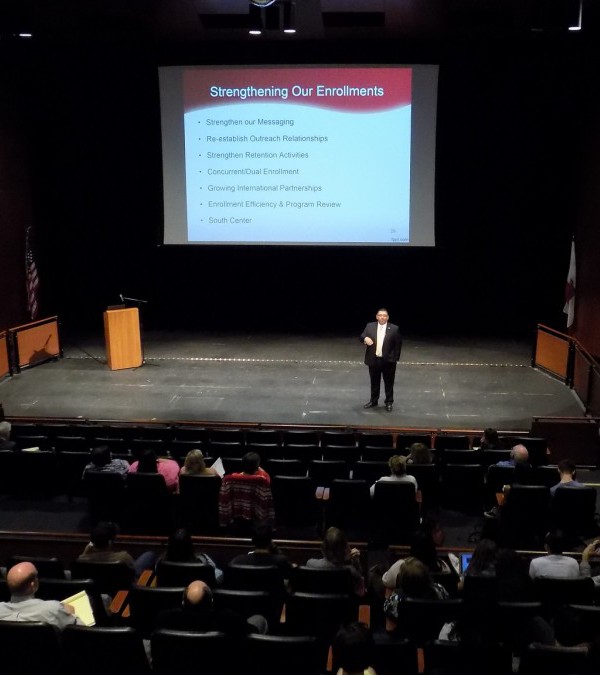 Interim president speaks the good, the bad, and the ugly of Palomar

President Adrian Gonzalez said that the past six months have been tough and acknowledged key issues that have been neglected recently as college officials try to hire permanent employees to replace those who took an early retirement last year.

Gonzalez said that some issues need to be addressed now, even though positions like president are still being served by interims. He focused on enrollment. Within the past few years, Palomar has lost about 5,000 students, he said.

Gonzalez said there are several factors that are contributing to the rapid decline of students. He explained that obstacles such as Highway 78 and Mount San Jacinto’s new plan to build a campus along Interstate 15 pose a threat to Palomar’s enrollment.

“There is a population of community college students that are enrolling in college, but they are choosing another college and we must address that,” Gonzales said. In a PowerPoint, he lectured that we are loosing 58% of our southern district students alone.

“What does that mean in dollars? $14 million,” Gonzalez explained. He stated that the notion we have always had a fiscal problem is false because we have had a large reserve, and he confidently stated that, during this year, we are “officially stable.”

To keep the budget solvent, efficiency in schedules has been a running thought for faculty as well. They are trying to find a way to balance between the costs of running a class with low enrollment while still offering a variety of classes to appeal more students. The interim president said classes that have low enrollment are being cancelled because the school still must break even.

Gonzalez shared that many students have left Palomar due to its lack of classes during the desirable 10 a.m. to 2 p.m. hours so they are focusing on ways to keep students enrolled at Palomar.

During the forum, Gonzalez also spoke about the lack of student involvement, the marketing of future students, and the ongoing diversity issue in the hiring process.

Although Gonzalez stated that Palomar is going through a difficult rough patch, he said we are still accomplishing plenty great things.

“Sometimes we have to celebrate the good stuff. We have to remind ourselves how good we really are,” Gonzalez said, “the bottom line is, we are going to be okay.”