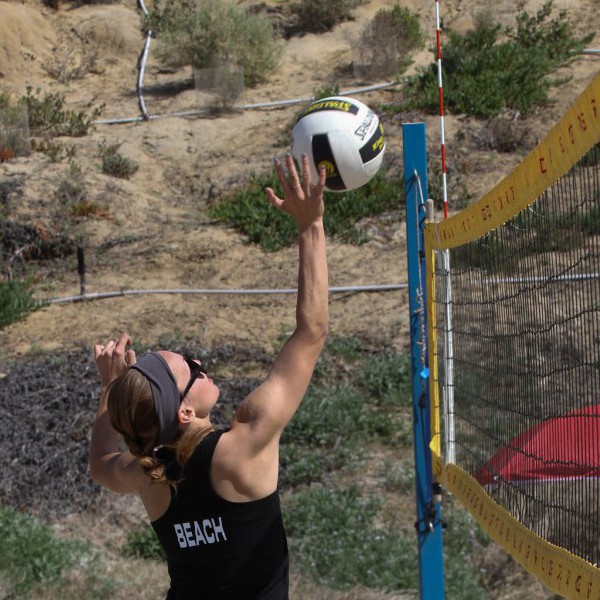 The mix of wind, sand, and sea helps to concoct quite the atmosphere for collegiate beach volleyball action.

Palomar’s beach team, this early on in the season, is still about learning and growing, much like the budding sport that is only its second year of existence as an official CCCAA sport.

After going 3-7 overall (2-4 conference) in the first season, this year’s team features seven new freshman as part of the 11-woman squad.

“That’s why we’re still trying to figure out who works best with each other. We’ve had a couple of scrimmages early and we have an idea of who we want to be together,” Seiler said.

Coach Seiler is also the current coach of the women’s indoor volleyball team and is a former standout volleyball athlete himself.

Unlike indoor volleyball, where teams consist of six players a side, beach volleyball has teams of twos. The court is a bit smaller, and the pairings of teams must consistently be in sync and communicate well to function properly. For the Comets, the rapport is steadily building.

“For a pair, we do well. We know how to work the ball around and we’re pretty good at reading the ball on defense,” sophomore Haley Farnum said.

Farnum, a member of the 2014 indoor team, and her teammate Brittany Mitchell, began the season as one of the Comet’s top duos, Sailer said.

The mood as a spectator is a bit more relaxed than at an indoor event, given the backdrop of the ocean waves rolling in and seagulls flying overhead. But intensity can quickly ramp up during a 30-second rally. For the athletes, proper movement and footwork is crucial to covering the court.

“The sand is a whole different game in itself. Wind, sand, and sun,” Franum said, “you definitely don’t get that indoors.”

Both versions of the game have similar skills for success, but beach volleyball has more to do with players getting touches on the ball.

Many players compete in both sports, bringing different advantages to each season. Four members of the team were on last semester’s indoor squad that went 15-8.

“This game really is beneficial for the indoor, it makes them a lot stronger and quicker… they’re touching the ball a lot more outdoors than indoors so their ball control gets considerably better,” Seiler said. “Sand is kind of the big equalizer … it’s great when you’re a taller player but if you can scrap and have great ball control you can compete with anybody.”

Now a championship sport at the NCAA Division 1 level, scholarship opportunities are being offered to the athletes, providing more opportunities for collegiate play. Kelli Iverson, a member of last years team, recently became the first beach volleyball scholarship recipient for the program, electing to sign for Grand Canyon University.

“It’s expanded a lot more, like not even here but in Colorado when I was a freshman in high school there was no sand volleyball that existed and now that’s all girls want to do,” Gabby Hutzler said.

Iverson and Hutzler were a pair during last season and would often go to Moonlight Beach on weekends for extra training.

Palomar does not currently have a home court on-campus, and the team practices at nearby Mission Hills Church. The athletic department’s upcoming overhaul includes plans to include a couple of sand courts.

The Comets are already 3-1 in the season. The next matches for the team will be on Friday, April 1 versus Grossmont and San Diego Mesa at Grossmont College in El Cajon.