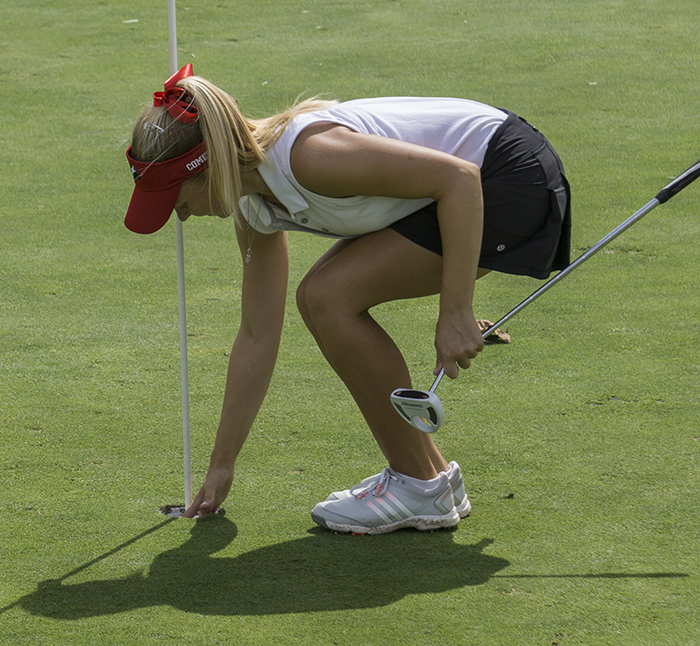 Hole in one ace

Brittany Bilek scored the first hole in one in Palomar women’s golf history with her first shot on Sept. 21 at Twin Oaks Golf as a part of the Orange Empire Conference and went to score yet another hole in one later in the season.

“I didn’t believe it. Nobody believed it. I even walked up with my putter.” When asked how she felt about scoring a hole in one.

Bilek cheerily explained: “The first six holes weren’t so good….I was mad and I just wanted to hit it I didn’t care where it went and it kinda went into the hole.”

Ironically enough, she had been having a poor time at her first six holes of the day when she angrily hit a shot that some golfers don’t make in their entire careers. Bilek then went on to make another unlikely shot later on in the season. According to an online article by golfdiegest.com, the odds of an amateur landing a hole in one are 12,500 to 1, which brings one to wonder the odds of scoring two in the same season.

Her holes in one aided her in becoming the lone team member who qualified for state. She later ranked 6th as a part of the California Community College Athletics Association (CCCAA) State Community College women’s golf tournament , according to a press release. Bilek said she almost scored another hole in one during the tournament.

Bilek added she had her roots in golf in summer camps when she was younger, but played in high school when she failed to make it into the cheer team.

She hopes to play competitively at a four year school in her future.

Rodney Figueroa and Daze Castillo contributed to this article