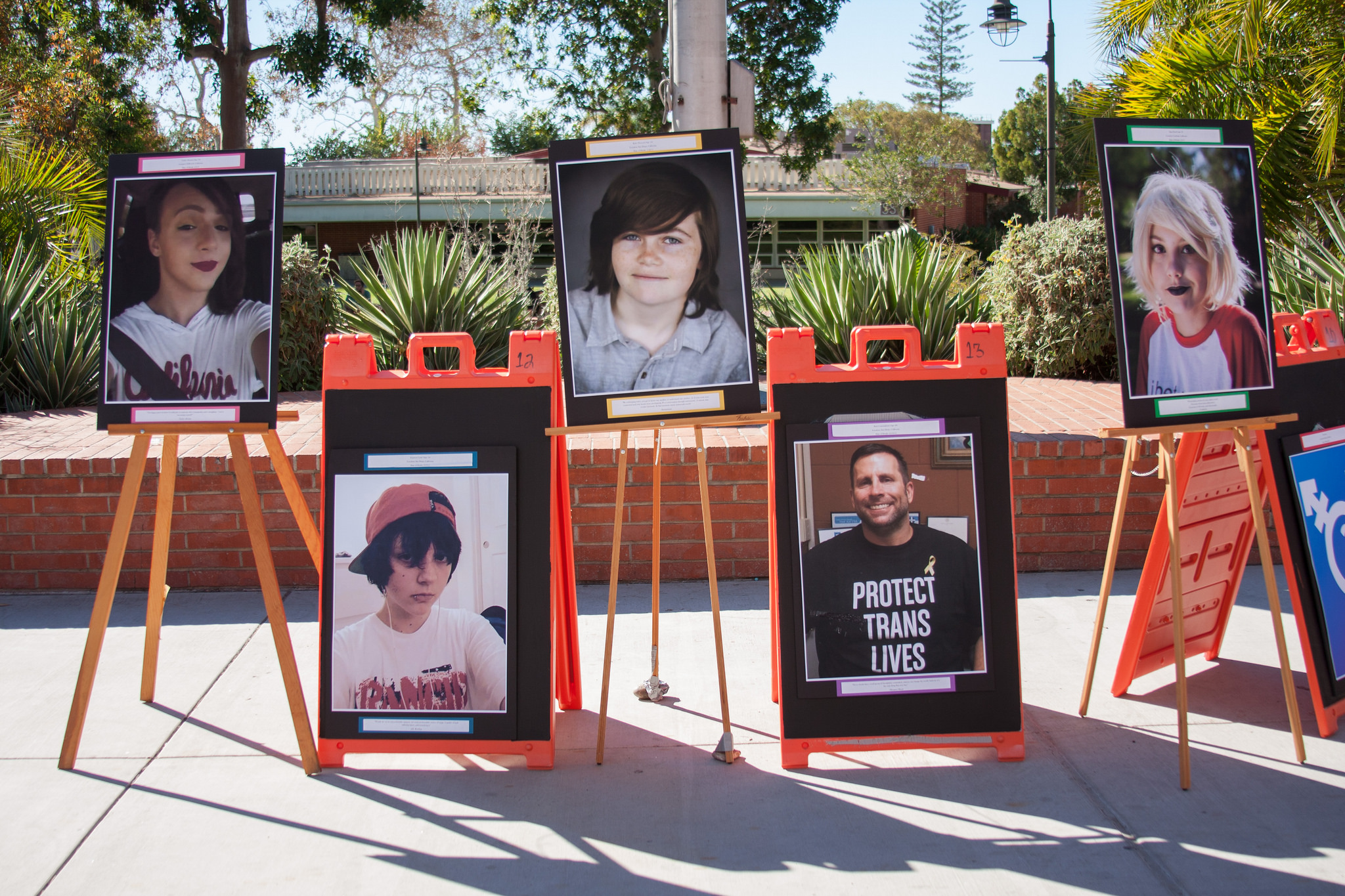 Advocates of the LGBTQA community came together to celebrate the first annual Transgender Day of Remembrance on Nov. 19.

Hosted by the Gender and Sexuality Alliance (GSA) club, the event focused on bringing awareness to the issues the trans community faces. The murders and suicides of transgender individuals during the last two years were commemorated.

A memorial walkway was set up in the Student Union. Several booths from different clubs and organizations were clustered around to educate students about trans lives, and to provide a support system for those struggling with gaining acceptance from their peers.

Vice President of the GSA club, Riley Gibson stated that 226 transgender individuals were murdered in 2014 and that 74 murders have taken place worldwide this year. The names of each of the 74 individuals were listed on a poster board for remembrance.

Gibson said that the names listed were only the ones that have been reported, and that there are several more that need to be added to the list.

Hannah Dayhomf, a 19-year-old sociology student at Palomar said that the presence of the community is important to have on campus to commemorate the lives lost and to raise awareness.

“It’s important to draw attention to the community since there is so much stigma around transgender people…it basically comes down to dehumanization. Transgender people are just as human as cisgender people,” Dayhomf said.

Four transgender teens in the San Diego County have taken their lives this year due to excessive bullying and a lack of a support system. Their pictures were placed on poster boards near the cafeteria to mourn and honor their lives.

Taylor Alesana, a 16-year-old transgender girl from Fallbrook, killed herself in April after being severely bullied at school and on the internet.

Alesana posted a video last November talking about her experiences as a transgender student in Fallbrook High School. She stated how making friends is one of the hardest parts about being transgender.

“I’ve lost tons of friends, tons. And it’s been hell. I go to school everyday, I get my lunch, and I sit down alone,”she said in the video.

Alesana’s attempt came weeks after Sage-David’s death, a transgender teen from Encinitas who took his own life in March.

Kyler Prescott, a 14-year-old transgender boy took his own life in May. He was known for his involvement in the North County LGBTQ Resource Center, and for having a strong support system from his family and friends.

The fourth reported death in the county was Emmett Castle, a 14-year-old transgender boy who has made several attempts was found dead in his father’s home in Mission Valley in October.

A panel called Trans Talk was held after the memorial walkway. Approximately 25 people showed up to learn about the personal hardships each of the speakers have come across.

While the speakers shared their stories, a slideshow of transgender people who were murdered worldwide this year was projected in the background. A majority of these trans individuals were stabbed to death, beaten, and were found with gunshot wounds.

Speakers of the event emphasized that 61 percent of transgender people who confronted an adult or school official about being bullied did nothing to prevent bullying in the future.

Charles Porter, a 19-year-old student majoring in business stopped by the event to show his support for the community.

“Just be educated about different things. You don’t necessarily have to know a lot, but just know a little bit about everything,” Porter said.

Visit The PC3H office /Pride Center is located in room ST-72 across the lawn from the Student Union, near the administration building.

It’s just a struggle because being told who you are is hurtful, and no one really wants to hear that who they are is difficult and shouldn’t be allowed in society – Logan Betancart, 16

People are going to be people. You can’t nessisarily change who one is. You don’t have to support it , but you also don’t have to express hatred.” -Charles Porter, Business major, 19

Although, Transgender Day of Remembrance may be over, there is still need for awareness when it comes to the community surrounding them. Those who identify as Transgender are constantly discriminated against. According to Transstudent.org, 41% have attempted suicide, and 80% feel discriminated in school. These numbers need to change by awareness, education, and understanding of the community.

Here are tips to helping achieve that goal of equality

Links below provide information about the event, and the importance of knowledge and education regarding the trans community.