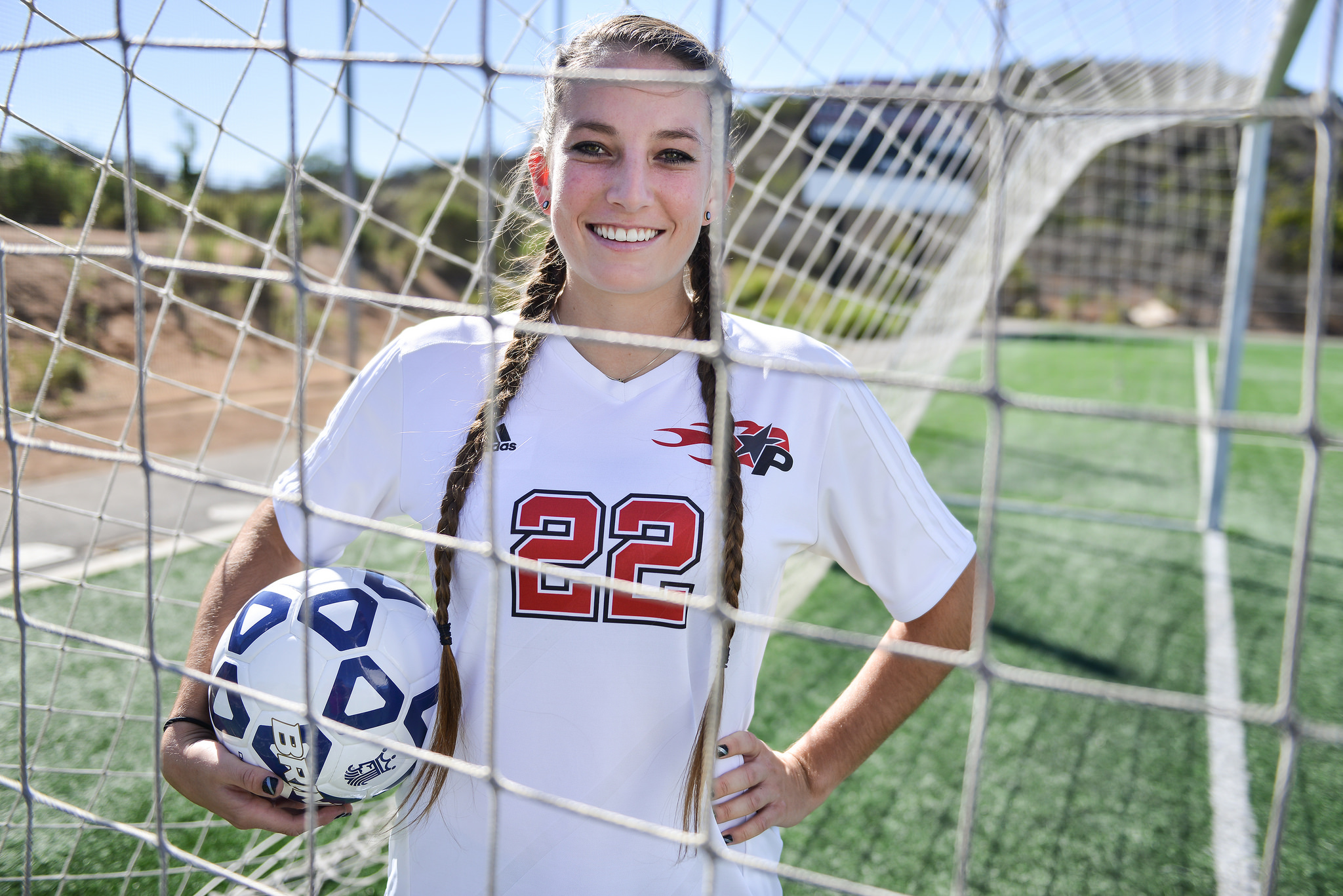 Starting her soccer career in the third grade in Newport Beach, Palomar striker Grace Busby almost didn’t get to where she is now.

“I quit playing at first because I hated having to put the shin guards and socks on.” Busby said.

Now the Comet’s leading scorer, Palomar’s women’s team is certainly glad she was able to overcome the equipment obstacles.

“We didn’t expect her to come in and do the things that she’s been able to accomplish as,” said Palomar Head Coach Hector Hernandez.

Now, in her first semester at Palomar, Busby is one of the best players on the women’s soccer team, scoring 12 goals and providing four assists through 14 games played so far this season.

Busby said she considers her greatest attribute to the team to be her competitiveness.

“I don’t care who we’re playing or how we’re supposed to be ranked against them,” she said. “I’m always going to want to win and I’m going to do whatever I can to do that.”

Valentina Zito, the team’s goalkeeper, said Busby’s greatest strengths as a player are her speed and ability to kick adeptly with both her left and right feet, a rare skill to have. A stalwart on the team herself, Zito leads all CCCAA goalkeepers in saves for the second straight season.

Central midfielder Melina Heredia also said that Busby has the best ball control she’s ever seen in a teammate.

“Her shots are incredible,” Heredia said. “She can take shots from the half-way line. She’s definitely an asset to our team.” The freshman from Valley Center is second on the team with six goals this season.

The team of girls is trained by head coach Hector Hernandez, his brothers Jaime and Carlos, and assistant coach Marcelo.

Busby said that “getting all that input from all of them is really helpful because they can all see a different thing in me that needs improvement.”

In this season, Busby and the rest of the team have had to face the challenge of being low on players, forcing them to only have one or two subs available when sometimes playing against teams with three sets of full teams.

“I’ll never get a break,” Busby said. “It’s hard to give it your all for the whole 90 minutes. Normally you have the crutch of getting a break at some point so you can push yourself harder, but we all just have to suck it up and deal with it.”

She described this as being the biggest challenge of the season for the team, however she also said her favorite thing about soccer is the challenge.

Busby said that when playing soccer you’ll never face the same exact same thing again, and that the sport has taught her the life lesson that you always have to look at an obstacle and figure out a way around it.

Busby recalled her favorite memory on the soccer field as the day she scored the golden goal for Escondido Charter High School after going into overtime in the quarterfinals of the playoffs. After scoring the goal, her teammates celebrated by hoisting her up into the air.

During her senior year she led the league in goals, which she said she considers to be her biggest achievement as a soccer player.

Busby said that through everything her greatest support has been her parents. “They go to every single game. My dad will tell me it straight and he always tells me what to work on so he’s really been pushing me hard my whole life.”

If it wasn’t for her dad and the way he motivates her, Busby said wouldn’t be where she’s at as a soccer player.

Busby aspires to eventually play for a four-year university, and as for the rest of her future she is certain of one thing: When she has kids, she’ll be teaching them how to play soccer.