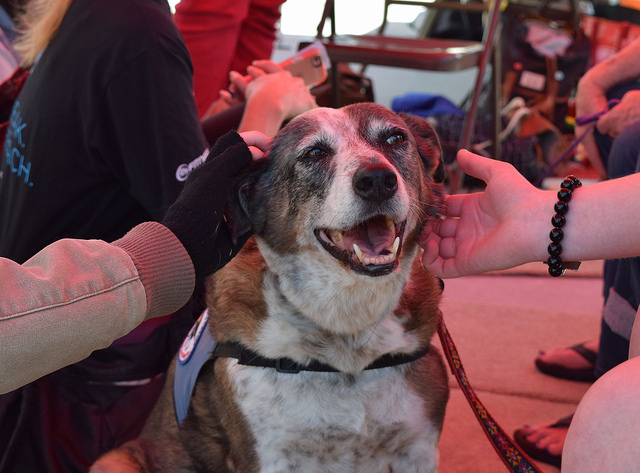 What do therapy dogs, a self-defense class, a seminar, and a movie screening all have in common? They were all part of PTSD, Sexual Assault and Domestic Violence Awareness Week at Palomar.

The four-day event was held the week of Nov. 2, hosted by two Palomar clubs: Active Minds and Gender & Women’s Studies. The event highlighted sexual assault and domestic violence, and the post-traumatic stress disorders related to these traumas.

Awareness Week was born from an idea for a self-defense class that came up during the spring. Kim Kuske, president of Gender and Women Studies, wanted to expand on that idea after learning that some students did not feel safe on campus.

“We need to have a self-defense class … It’s important to talk about why we need that,” Kuske said.

Kuske added that they wanted to make sure students had the all the resources and knew that they had a safe community they could go to.

Casey Williams, the co-president of Active Minds, cited a recent study done by the Association of American Universities as to why the issue is so important.

To kick off the week-long event, students were invited to meet the clubs and pet Love on a Leash therapy dogs on Nov. 2.

“We had the therapy dogs come out, which students always love. It was a way to get the conversation started about the rest of the week,” Williams said.

There was a self-defense class Nov. 3, taught by Chris Brant. Students were taught different moves to protect themselves if attacked.

The “PTSD and Surviving Trauma” Seminar was held Nov. 4, with speakers from the Women’s Resource Center, Gender and Sexuality Alliance, and students. The seminar focused on PTSD related to sexual assault and domestic violence. Speakers discussed their personal experiences and the resources available after ground rules were laid to make sure that it was a safe place to have the discussion.

“It is important to me, as someone who has experienced that and is still dealing with the impacts of PTSD,” Kuske said.

The last day of the event was a movie screening of CNN’s “The Hunting Ground.” Williams had seen the movie at an event at USD and knew it would be a good fit for the event.

“It focuses on sexual assault on college campuses in a way that most people don’t even realize. Which is that colleges profit from telling their students not to disclose their rapes. It’s very political and economic for colleges to suppress their reported numbers of rapes and assaults. It holds colleges accountable,” Williams said.

Awareness Week was a way for students to learn and gain the resources needed if they or someone they know is experiencing or has experienced sexual assault, domestic violence or the PTSD related to these issues.

For more information, students can contact Active Minds at (760) 891-7511 (for non-emergencies) or by emailing the Gender & Women’s Studies club at palomargenderstudiesclub@gmail.com.