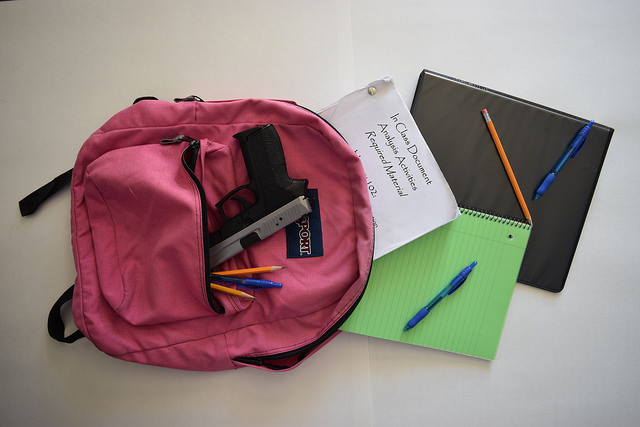 In the wake of recent gun violence, California has become one of the states to prohibit firearm possession on school grounds.

On Oct. 10, Gov. Jerry Brown signed into law legislative bill SB 70,7 which transformed California schools to gun-free zones. This bill will allow a person with an appropriate conceal and carry permit to carry a fire arm within 1,000 feet of a school zone but not on a school zone — unless they are an officer of the law.

The bill was intended to provide further safety for California schools and has drawn harsh criticisms from gun rights advocates who feel it will only lead to further violence.

“This is not just an attack on our Second Amendment rights; it is an attack on the most vulnerable in our society,” said Brandon Combs, the President of Firearms Policy Coalition.

“Victims of domestic violence and stalking, judges, prosecutors, and public defenders who have a carry license will now have to leave their registered self-defense handguns at home when picking up their children at school, leaving them without the necessary protection from violent criminals,” he said.

California’s SB 707, however, will have little effect on Palomar students because the campus already has a firearms ban. Palomar’s policy bans students, staff and faculty from carrying weapons, including those allowed off campus with a conceal and carry permit.

However, prior to SB 707, a section of the California Penal Code allowed for people with a valid concealed carry permit to technically carry a weapon on campus, but only with express permission from either the college president or the campus police chief.

Palomar spokesperson Laura Groupen explained why the campus already has a firearm prohibition.

Palomar students are split on whether banning firearms on campus will actually reduce the chance for on-campus gun violence.

Michael Bailey, a 28-year-old Palomar student, and veteran for the U.S. Marines is skeptical about restricting gun possession on California campuses.

Bailey argues that “criminals are inherently irresponsible” and will, because they do not follow laws, bring weapons regardless of regulations placed by the state or an individual campus.

Bailey added that gun restrictions lead to only criminals possessing weapons while the rest of the honest population vulnerable to gun violence.

“No it is not going to help. In fact, it is going to make it easier for people to go on these types of rampages,” Bailey said.

Other students at Palomar feel that high rates of gun possession on campus, even if they are acquired legally, will only contribute to further violence. Many students simply do not feel safe unless the weapons are exclusively in the hands of law enforcement.

Kaitlin Whitacre, 25, said she feels that gun control is inherently unfair to honest firearm owners but a ban, especially on campuses, is in the better interest of the campus community.

Whitacre added that alternative solutions must be explored to end the epidemic of gun violence on campuses. She concluded that additional firearms, brought on by legal owners, does not add to the safety of a campus.

Both gun advocates and those wishing for continuing regulation agree that there is a problem with gun violence.

Recent shootings have energized the debate and California has taken its stand on the issue.