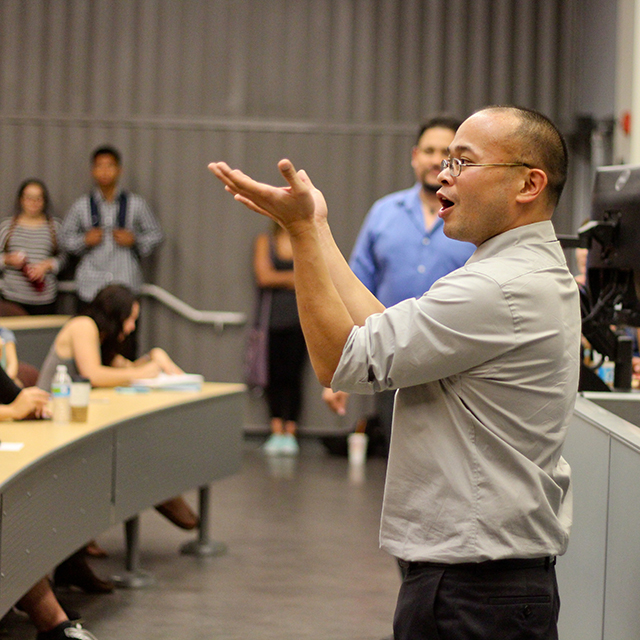 The standing room only lecture on medical marijuana on Oct. 15 was one of several lectures by professors and local experts as part of the Political Economy Days event.

Political Science Professor Peter Bowman described the 10-year-old event as a way for students to get facts about important issues from “experts instead of bloggers on the internet who usually don’t know what they’re talking about.”

As a part of the event, the marijuana debate was unlike anything that had been done previously.

One afternoon when professors Peter Bowman and Joseph Limer met up for drinks, they spent a few hours discussing possible ways to add something fresh to the debate. They ended up deciding to give several students from their classes an opportunity to give their best arguments and rebuttals in front of the debate audience.

However the arguments made did not necessarily reflect the opinion of each debater. By a coin toss it was decided who would take which side.

The result was that students from Limer’s class would argue that medical marijuana should be regulated by the federal government (we’ll call them “team federal”), while the students from Bowman’s class would argue that each individual state should have to right to form its own policy about the drug (we’ll call them “team state”).

Prior the the debate, five student volunteers were randomly selected to be the judges who would decide which side made the best arguments.

Dakota Paulson, 20, a history major, opened up with team federal’s strongest argument, which was that the Supremacy Clause establishes federal law as “the supreme law of the land.”

Kayla Fernandez, 19, an undecided major who is interested in law, added with examples of of cases to strengthen their argument.

Brandon Newton, 20, a behavioral studies and social sciences major, responded passionately saying that the federal ban on medical marijuana is simply unconstitutional and a violation of a citizen’s right to life, liberty and the pursuit of happiness, especially for those battling diseases.

After a Q&A session with the audience it was announced that team state won the debate 4-1.