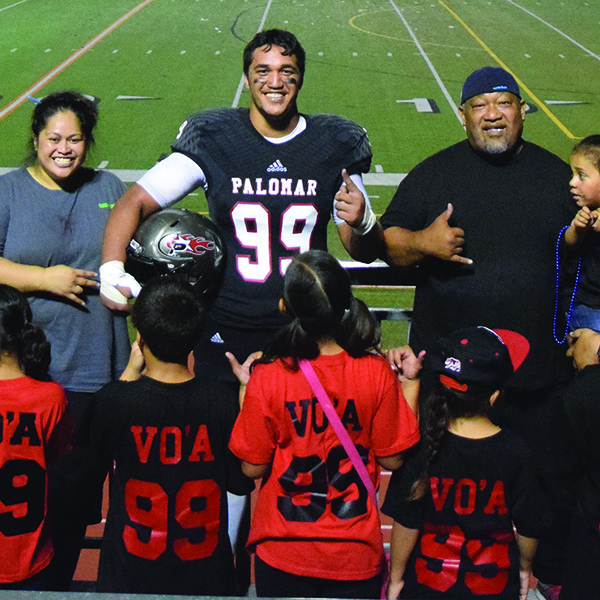 If it sounds like Palomar’s defensive end Arnold Vo’a has his own cheering section, it’s because he does.

Every time you hear “Vo’a” roar over the speakers at a Comets home football game, the stands at the 30-yard line erupt. That audible explosion is just a part of the sophomore from Waianae, Oahu’s family who come to his games in support.

“Their support really helps me in the game. It makes me want to make more plays to hear them scream more,” Vo’a said.

Vo’a moved from Oahu, Hawaii, to play football at Palomar two years ago, just as two of his six brothers had before.

Standing at 6 feet 4 inches and weighing 274 pounds, Vo’a blends in with the other lineman down in the gridiron trenches. But his family has no problem finding him, as witnessed by the “Go Arnold!” chants coming from the stands whenever he steps on the field.

“I am just a simple guy, playing football, like any other athlete trying to make it out there,” says Vo’a. He describes his priorities as “God, family, (and) football.”

Football is a way of life for the Vo’a’s. Each member of the family has their own shirt, personalized with Arnold’s name and number on the back.

“It’s the best way to support, and stand out from everybody here so Arnold can see us from a distance and know that his family is here to support him,” said Logitu Vo’a Faasa, Vo’a’s uncle.

The group seen at the Sept. 19 game is only a part of the larger family. There are many more that were unable to attend the Comets 42-21 victory over Mesa College but all of his family will be in attendance for the last two home games, including Vo’a’s parents and nine siblings from Hawaii.

This is Vo’a’s final year playing for Palomar. In addition to playing football, the sophomore is currently taking four academic classes and is a part of the youth ministry at his church. He starts his day early and ends it late, working hard to achieve his goals. Vo’a modestly contributes his success to “the support from my family and having a good foundation from the church.”

“We are here to support Arnold and his last year here. We’re hoping and praying that he will get somewhere from here,” says Logitu Vo’a Faasa. Arnold’s aunt, Vonnie Vo’a Fassa adds, “We know Arnold is going to make it.”

He plans to transfer and play football for another school, hopefully at a Division I or IAA program. As for the long term plan, Vo’a says, “I want to make it to the NFL; that’s every football player’s dream. But, if anything I want to get my masters in kinesiology and hopefully coach. I love the sport so much.”

For his family, he wants to make sure they know, “I love the support. I appreciate and thank them so much for it. It’s been a blessing.”