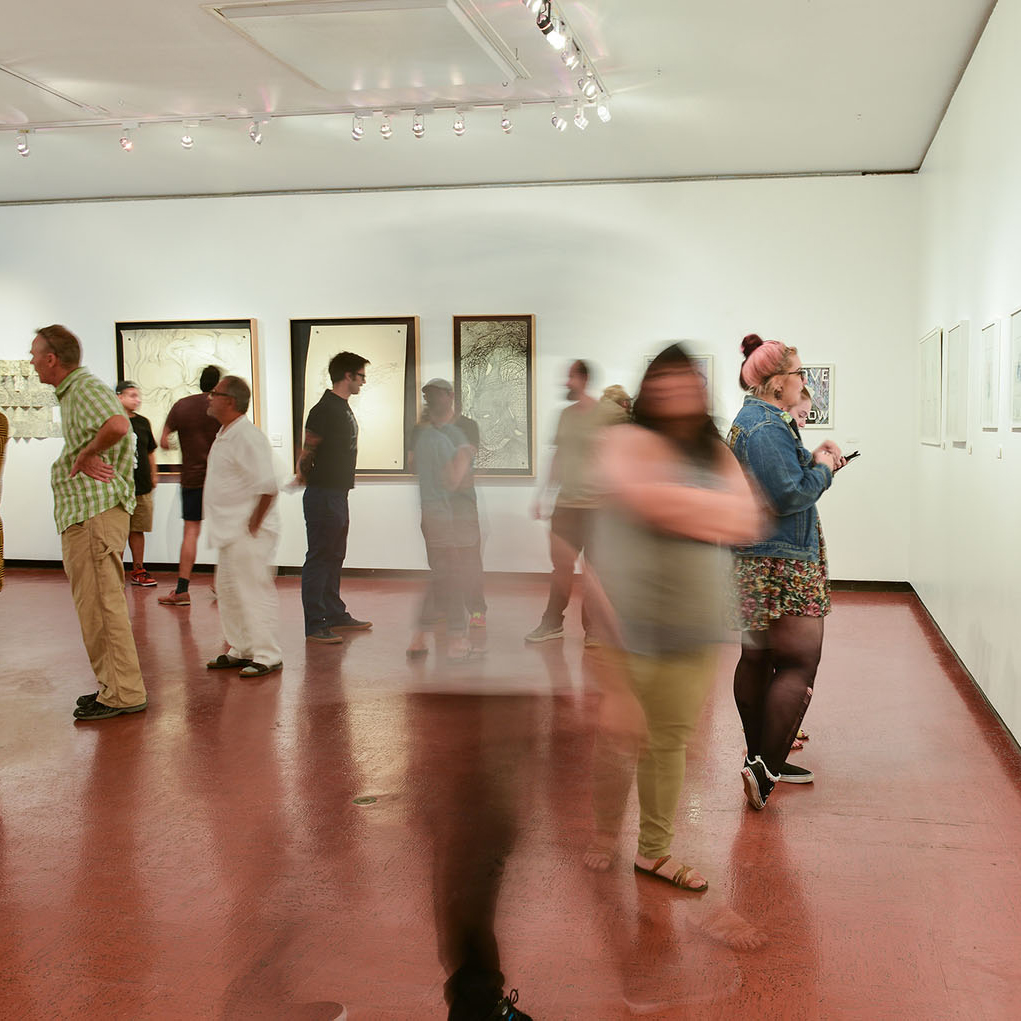 Spectators were able to revel at the creativity of the art covered walls featured at “Sharp Contrast” at Palomar’s Boehm Art Gallery on Sept.12.

These artists embraced various media and methods encompassing the materials around them to bring their style to life. Some of the media include graphite, gouache, acrylic, charcoal and laser engraving. Canvases ranged from pieces of wood, the wall itself, toned paper, and a hand drawn animation displayed on a television.

Palomar staff and students ventured into the gallery to decipher the meanings and discover their own emotional attractions to the artworks.

“It is refreshing to look at all the fine lines, after staring at Photoshop all day, looking up close at the details. It is stunning,” Caterina said. “It makes me think of my Grandma, it is very nostalgic.”

Ceramic students John Brouwer and his mother Grace Brouwer, said they enjoyed Patrick Shields work because it relates to the type of ceramics they love crafting.

The intricately roaming lines of Patrick Shields works stems from the idea that “your mind goes somewhere and if you let it just go, it becomes a process of creating technical images combined to make an organic piece of work,” he said.

Shields is an architecture teacher at Woodbury School of Architecture in San Diego and a freelance designer, who dabbles in sculpting. His work is abstract, or “doodles with rules.” For Shields, creating his art is synonymous to playing a game, embodying the idea that the art dictates the outcome.

Inspiration evolves from untouched parts of our hearts and sacred places in our soul, according to Joshua Eggleton, who said his art is driven by the mystery of the cosmos and the philosophy of one’s own mortality.

He manipulates graphite and colored pencils on paper to depict works resembling film negatives. Eggleton overlays text and symbols such as human skulls that inspire thoughts about an individual’s existence.

“One of the main threads that goes through this work, is cosmology, the way human beings place themselves in the universe,” Eggleton expressed while explaining his artistic theory.

“The skulls themselves are memento mori, which is remembering that eventually every person has to face death,” Eggleton explains. Eggleton spends his time teaching art at MiraCosta College, and Cuyamaca College in San Diego.

Inspiration doesn’t have to come from within, it can generate from past experiences. Robert Nelson spent 15 years as a graphic designer, leading him to pursue art after the company closed. Nelson puts his own spin on classical Renaissance artworks. In a three series collection, Nelson combines modern technology and depicts a Renaissance-esqe image perfectly confined within the borders of three bright, neon-colored robots.

Neighboring college students also came to scope out the art. MiraCosta students entered the premises merely to get class credit, but excitedly spoke about returning after a fire sparked within them to take a seat and begin their own drawings. Southwestern College students drove all the way from Chula Vista to film a documentary on the art by Marisol Rendon.

Henry David Thoreau got it right when he said “the world is but a canvas to our imagination.”