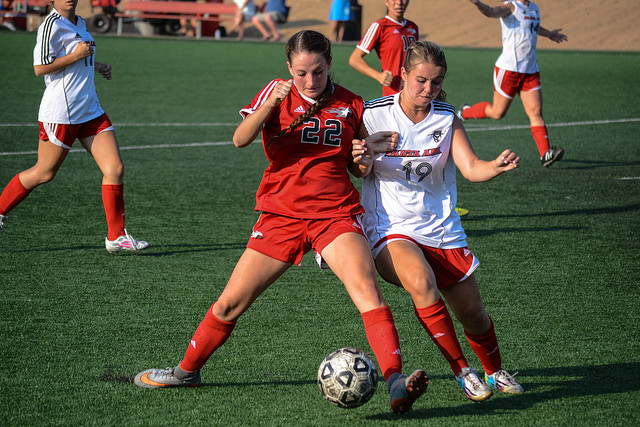 That’s where Palomar women’s soccer head coach Hector Hernandez says his team is compared to this point last year. For Comets soccer team, this season will key upon a mostly returning backline, revitalized midfield and a deceptively fast attacking trio.

After going 9-9-2 last season,the returning Comets come into this year battle-hardened and with an understanding of the rigors of collegiate level athletics.

With this team consisting of 11 freshman out of the 16 spots, Hernandez will look to his defense to be the base of all operations and a source for the rest of the team to build from.

“I’m liking the attitude of the team and the effort everyone is putting in,” Hernandez said.

With returning back line members Alexis Tietjen (Foothills High), Elexus Garcia (Chaparral High, Temecula), Justine Miranda (High Tech High) and goalkeeper Valentina Zito the stability and confidence provided from the back will be relied upon to push up through the rest of the team.

For Zito, the sophomore from Hackensack N.J., her second season on the West Coast should build upon last year’s amazing debut. Leading all California Community Colleges’s in clean sheets and saves the shot-stopper is a rock at the back and tries to instill her confidence in the team up the field.

On how she’ll look to provide leadership to her team, Zito said, “I want to show the girls that every game you have to give 100 percent even if we’re losing and for them to not be down on themselves.”

The motivation for the team is communicated clearly in the intersquad ranks as they work hard to better themselves each day.

“My teammates motivate to do better and give my all every single game,” Zito said.

For Coach Hernandez, in charge of the program since 2011 and a former PCAC player of the year during his collegiate days at Palomar in the 1980s, the midfield was an area that looked troublesome coming into the season.

With last year’s top goalscorer Kaitlyn Crone graduating, some recruiting had to be done in the offseason. In such a key area that transitions play from defense to attack the play up to this point has been a pleasant surprise thanks to the inclusion of new freshman.

“Midfield was the area where there was a little concern but we seem to have really rebuilt the middle and they’re playing really well right now,” Hernandez said.

Freshman Melina Heredia has been a revelation. Prior to enrolling at Palomar, the Valley Center High graduate was coached by Hernandez on a club level at FC Heat making the transition to Palomar smooth for the midfielder known for a constantly motoring engine in the center of the park.

Up top in the attack for the Comets marks one of the most drastic changes from last year. The new triangle forward formation provides firepower that will hope to improve upon last year’s record of 34 scored in 20 games. The triumvirate of Freshman #22 Grace Busby (Escondido Charter), #3 Lydia Ayala (Vista) and #23 Samantha Swanson (Colfax) provide a deceptively fast attack that flusters and troubles oppositions’ back lines.

In the opening home match of the season versus Fullerton on Sept. 4, the new offensive showcase was on display as Busby recorded her first hat-trick, capping it off in fashion with a crafty free-kick. The Comets went on to win the match 4-1 and collect their first win.

Conference play will be a vital area that the team will look to improve after last seasons 2-6 record in PCAC play. With conference powerhouse Miramar College taking home the championship the past three seasons in a row, the Comets have their targets set on the Jets.

“It’s just a matter of us executing and limiting our mistakes,” Hernandez said.

The Comets next home match is at 3:15 p.m. Sept. 29 when they host Mt. San Jacinto at Minkoff Field.

For Zito and the rest of her squad, the motivation and pride they have playing for the school isn’t just internal and something they’d like to be showcased.

“I want Palomar to be more noticed…I want everyone to know we have a soccer team and to come watch our games.”