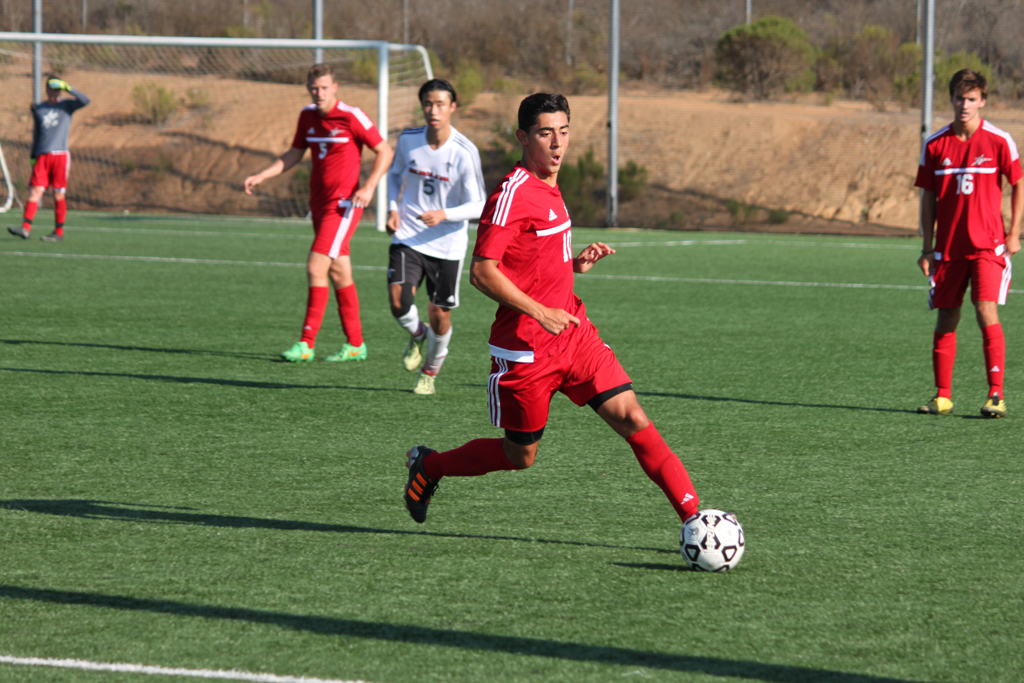 Mondays usually aren’t something most college students look forward to. But for the members of Palomar College men’s soccer team, meeting up for practice at the start of a new week means another chance to build chemistry and become an organized squad as part of first-year head coach David Whiddon’s revamping of the program.

With the departure of long-time head coach Carlos Hernandez in the offseason, the London, England born Whiddon steps in as manager after spending one year as the assistant coach. Last year’s team went 6-11-4 (win-loss-draw).

The new head coach said he is impressed by what he’s seen from his team so far.

“We’re happy with our progress but we still have along way to go,” said Whiddon while going through practice preparations.

A former soccer player himself during his collegiate days at Eastern Washington University, Whiddon has spent the past three decades as a high school varsity and club soccer coach, including a long tenure at local Rancho Buena Vista High School.

During his time at RBV the school was a strength in the region, advancing to the CIF San Diego section playoffs 20 out of 22 times. In 2008, Whiddon was honored by CIF as the North County Conference Coach of the Year.The change in coaches was announced this past Spring by athletic director Scott Cathcart, giving Whiddon the summer to organize and structure his strategy for this season.

That preparation time gave Whiddon the opportunity to put together his entirely new coaching staff, consisting of: Richard Kaiser, Aaron McElderry, and son Trevor Whiddon (an All-CIF San Diego section selection while playing for his father at RBV before playing at Cal State Fullerton on a scholarship.)

Using connections from his extensive career and having developed a rapport with the local coaches, this summer Whiddon saw many high school games and club tournaments to find quality players for Palomar.

for the program. With sophomore Victor Gonzalez being the only re- turning player on the squad and 16 incoming freshman the crop of new talent is there, the tuning is needed now.

The Comets began preseason camp with over 40 players. Whiddon and his staff whittled it down to a 21-man team, 18 of which travel for game days. The competition and battling for the starting 11 has continued into the season.

“The challenge for a lot of these players is making the jump from high school to the college level and facing stronger, more experienced competition,” Whiddon said.

“(Coach Whiddon) has put together a good coaching staff, he has a lot of experience and is bringing that onto the field,” midfielder #10 Victor Gonzalez said pre-practice, “We’re a lot more disciplined now and starting to build as a team, last year we had good individual talents but couldn’t come together collectively.”

Using the philosophy of: “Winning your playing time in training and keeping it with your match performances” Whiddon and his staff look to relay the message of organization and structure both in play and practice from the top down.

Academics are just as important as athletics to Coach Whiddon. Spending 17 years as a teacher, he emphasizes to his team the values of schooling and it plays a big part of his recruiting.

“Of course I want success on the field but without success in the classroom and moving (the players) onto a four-year school it won’t be a successful season,” Whiddon said.

Coach Whiddon said he is impressed with the fitness levels and how his team has progressed and ramped up, feeling like they had a great preseason.

After starting the season with a 4-0 loss versus national power Santa Ana College at Minkoff Field the Comets rebounded with wins over Moorpark (3-0) and away at Norco (4-1).

“We have a lot of good central midfielders and the defense is get- ting along well,” said sophomore midfielder Austin Rizzo, a transfer from San Francisco State University.

Beginning the season with two games at Minkoff Field, located next to student parking lot 9, the Comets then travel on the road for their next four contests.

“The four on the road will be a test of our maturity and experience,” Whiddon said.

The Comets 21-game regular season concludes mid-November. Their next home game is at 4 p.m. Thursday, Sept. 24 vs. Chaffey College.