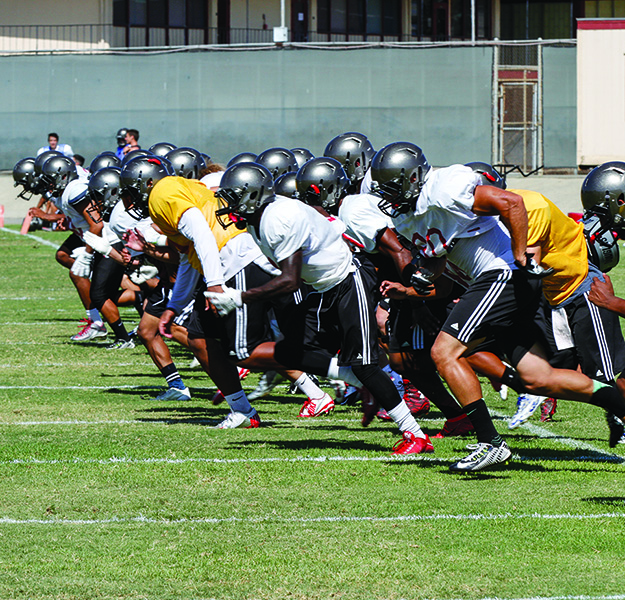 Comets football fires back up

Palomar College football is back to work at practice as preparations for the 2015 season begin to ramp up.

After finishing last season 7-4 and on a strong note with a 30-22 victory over Glendale College in the Patriotic Bowl, this year’s team has more fresh faces than returning players.

For head coach Joe Early and his 10-man coaching staff, one of the keys will be the veterans on the squad instilling the winning mentality early on and giving the newer players an idea of what it’s going to take.

“The guys that we do have (from last year’s team) will lead us the right way,” Early said after the Comets’ Aug. 22 inter-squad scrimmage.

In the first opportunity to see the team compete in game-like conditions with 7 vs. 7 and 11 vs. 11 drills, Early said he and his staff were impressed with the intensity shown by his players.

“It wasn’t a pillow fight. We triggered really well on defense and once the offense started going they were able to move the ball and put points up so it was a nice give and take on both ends.”

The battling for depth chart positions at this point in the season goes up and down the lineup including at the quarterback spot. After the departures of Mitch Bartram and Brett Hollingsworth from last season’s team there is a five-way competition.

“It’s been real good competition throughout the summer and into camp,” Early said. “It’s a big responsibility but I think we got some guys who are up to the challenge.”

All five are working with Quarterbacks coach Bill Diedrick, whose experience at Division-1 schools like Notre Dame and Stanford provides a knowledgeable source of instruction at the position. Whoever does end up taking snaps will have to provide a consistency and a sense of urgency to put points on the board, according to Early.

On the defensive side, the departures of Dylan Donahue (West Georgia), Javonte O’Roy (Texas State), Bryan Jones and Ian Kelly (Colorado State-Pueblo) along with others leave positions open for the influx of new talent. In total, 13 players from last years team have moved on to play football at a four-year college.

Preparations for this season began long before the first day of school. With football summer classes beginning in early July, work has been going on in the classrooms and the weight room.

Working out in the on-campus gym weekdays starting at 6:30 a.m. has become part of the student-athlete life as they prepare for the 10-game regular season that runs until mid-November.

“It’s basically become a year-round job and at this level you have to be strong to play this game. You gotta take care of your body and if you’re not strong, you’re not gonna survive. That’s just the way the game has evolved,” Early said.

Fortunately up to this point, unlike in past seasons, the Comets have not been majorly bit by the injury bug as both the players and training staff are working together to stay hydrated and healthy.

“It’s always good to start off with a win,” Early said. “I think we’re well prepared and I don’t see us changing that at all.”