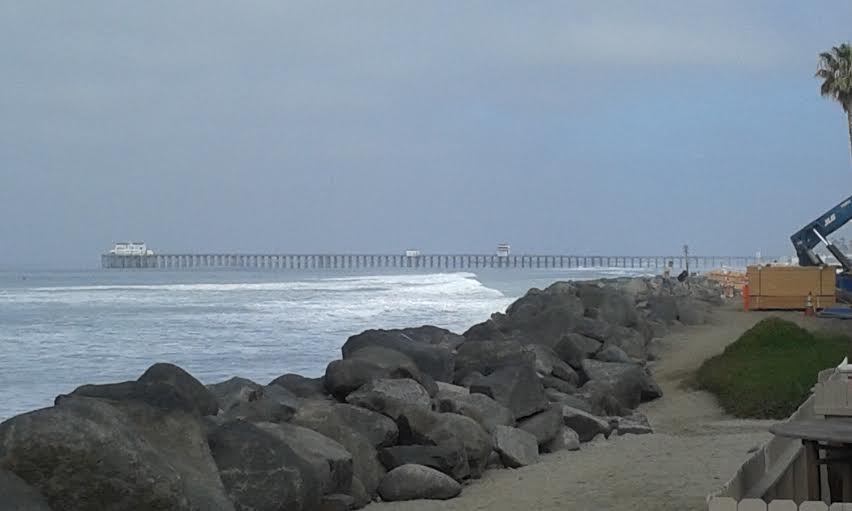 Surf Report: Back to Summer

Hello all. This week there will be some new activity in the North San Diego county area, as well as some top notch beach days coming our way. The weekend was a little rough as some storm clouds wandered over us here in North county and put down some rain, deterring some of us from hitting the water. Along with the rain came some pretty forceful winds, with a high wind advisory last Saturday. This week, temperatures are reaching close to 80 degrees most days, although a “cold snap” will start this weekend as the high will head back into the 70’s and 60’s. As for waves, don’t look for huge surf this week, but expect some medium sized waves.

Where are these waves coming from? Currently, nothing in particular is responsible for the waves. Wind, off-shore currents, and far away storms are all contributing as of now. The weekend was characterized by swells coming out of the south-west along with that storm, and there are still a few of those off-canter waves wandering in as of now, mixing with the directly west swells and the north-west swells. As we reach the middle of the week , the south-westerly swells will dissipate, leaving minimal northerly swells to wash the beaches. But as we get to the weekend and the temperature starts to drop, Solspot.com is predicting a new swell coming from the south-west, which will start reaching us here in North County. Things have a chance to ramp up because of the swell-period (which I will explain in another post), so keep your options open for the weekend.

Tip: Southerly swells mean that the waves are coming generally from the southern hemisphere. If standing on a cliff overlooking the ocean, you can see the difference in swell direction, characterized by which way the waves are breaking and which end of a single wave touches the beach first. For example, If you were looking north, and a single wave looked like it touched the beach from right to left, that would be a northerly swell, because in general the wave was facing to the north. Westerly swells break all at once and reach the beach all at once, because our coast faces to the west and the swell is coming directly at the coast. So summed up, that generally means that the goofy footers (right foot forward) will have some front-side surf with these southerly swells, and the regular footers will have to ride back side. Swells heading both ways can always be found, but it is reasonable to expect more left-handers from a southerly swell.