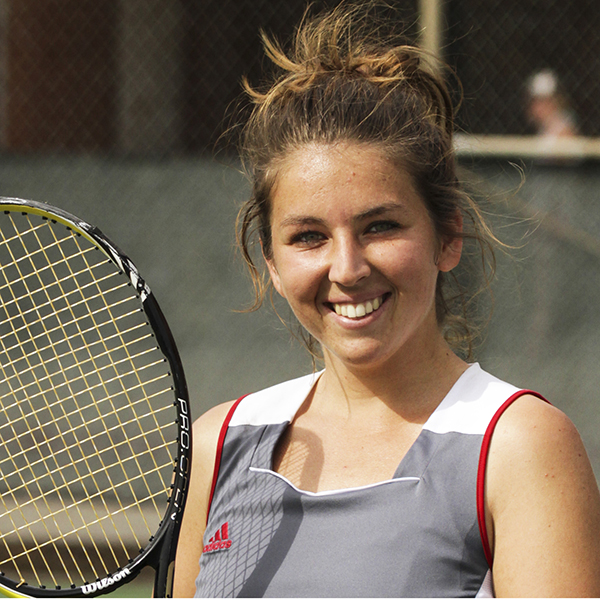 For freshman tennis standout Bettina Olah, the game has been on her mind from the beginning. First picking up a racket and playing at age 2, she was on the court before she could tie her own tennis shoes.

Since arriving at Palomar, Olah has been outstanding, splitting four matches against the two-time reigning PCAC champion, Grossmont’s Jaella Conway (winning twice and losing twice, with the second loss in the PCAC singles championship). With the first loss coming against the No. 5 player in the state at the time in just her second match, Olah’s adjustment to college-level competition has come with ease.

Being recognized as a PCAC Women’s Athlete of the Week earlier in March for her victory over Conway came as a surprise to Olah.

“I didn’t know I could get an award,” said Olah with a laugh after winning her double and singles matches in straight sets on April 2.

For Ronnie Mancao, head coach of both the men’s and women’s teams, the opportunity to coach Olah is something he’s been happy to have .

“Bettina is unique. She’s very talented and has been taught well in the past. She already has the strokes so mainly we work on the tactics and strategy of the game,” Mancao said.

Having a very successful time during his 15-year tenure as coach, including winning multiple conference championships and the 2011 ITA Region 1 Women’s Coach of the Year award, Mancao sees the potential Olah has and mentioned that a few 4-year universities were already monitoring her progress.

While excelling individually, Olah was also not hesitant to speak about the love she has for her teammates, something that seems to be reciprocated throughout the squad as freshman Rebecca Benson attests.

“In the beginning none of us knew each other at all, but when there’s only four people on a team it’s hard not to become super close. We’re like a family, all of our personalities work really well together,” Benson said.

Olah also appreciates the help she gets from the only sophomore and returning player on the team, Teresa de Anda.

“She is amazing. She tells us what it was like last year and how to prepare,” Olah said of her doubles partner.

Olah has been preparing for this most of her life. Starting lessons at age 7, she moved from Barnes Tennis Academy in La Jolla to the ISA Academy in Rancho Santa Fe at 13. During this time, Olah was traveling to Los Angeles and Arizona for tournaments quite often.

Olah was homeschooled her freshman year of high school before going to San Marcos and eventually transferring and graduating from Twin Oaks High School. She chose to take a two-year break from the sport from ages 16 to 18 to refocus and prioritize her education, she said.

After the drain of playing consistently for the majority of her life, she felt that a break was much needed.

“Those two years off helped me find myself and get away from being just a tennis player,” Olah said.

Academically, Olah is enjoying her time at Palomar, taking multiple courses with the goal of earning a major in kinesiology. While still unsure about her future occupation, Olah knows that an advancement in her tennis career is in the near future.

Getting back into her old form wasn’t a long process for Olah to pick up again as she just restarted training in January. With a smooth serve, quick backhand, and competitive streak, the left-hander is relishing her chance at Palomar.

To her teammates, Olah seemed reserved at first but as the season went along she has shown herself to be spirited and upbeat all the time.

With that level of intensity and the camaraderie that they have, the quality of the team has been greatly boosted.