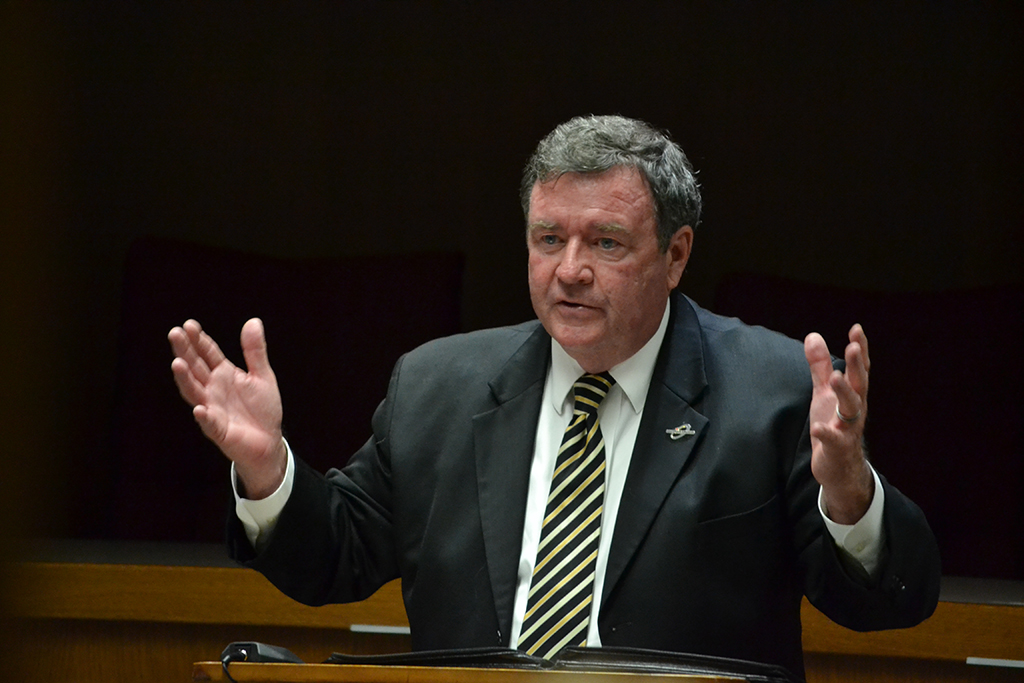 Forum informs audience of the happenings on campus

Accreditation, retirement plans and Palomar College’s budget were the three big topics discussed during an All College Forum Monday afternoon.

Palomar President Robert Deegan led the discussion to a packed room of students, faculty and staff.

Deegan turned the discussion over halfway through to Vice President of Instruction Berta Cuaron to talk about accreditation. The college will be visited by an accreditation team next week to evaluate the standards of Palomar and to make sure it is upholding its quality of an institution.

Cuaron outlined what members of the college should be expecting when the 14-member accrediting team visits.

“As you all know this is our sixth year and so we are looking for a good reaffirmation of our accreditation,” Cuaron said. “I certainly think that many of us that were here six years go that was a couple of tough years for us, and I kind of call them the dark days here for me. But I think we are very well-positioned; our report has come together very, very well.”

Palomar had 11 recommendations for improvement six years ago and Cuaron said this was something the college has acknowledged and built upon.

By March 5, the accreditation team should have written a draft of their report and an exit report will be scheduled Thursday afternoon in MD-157. However, a final commission action won’t be available until June, Cuaron said.

The forum discussion then switched to retirement. Last semester a Golden Handshake was announced to be offered for Palomar faculty and staff. Eligible employees have until April 3 to sign up to retire early and receive a monetary incentive which is 75 percent of their base annual salary.

Deegan discussed the multiple retirements on campus, such as himself, Cuaron and Vice President of Human Resource John Tortarolo, and the plan for filling those positions with interim personnel. Deegan said he is projecting that 30 faculty and staff members will step up to retire.

“One of the issues that is very important to the Governing Board — and you’ve heard me say this a number of times — is to attempt to increase the diversity of our faculty, staff and administration,” Deegan said, adding he is calling for a diverse pool of candidates for each full-time position.

It isn’t just the key positions that will be leaving. Many faculty and staff may retire as well, Deegan said.

“We have promised the CCE (classified employees) that we’re going to fill the number of positions that leave, with new positions,” Deegan said. “That is not to say every single one exactly the same because maybe this is an opportunity to look at what we have … and mix it up a little bit to meet the needs of the college at this time.

“We are short staffed now, we’re going to hire the same number of positions. as those become available we will prioritize those and looking at those positions and certainly we understand that timing is critical for a lot of these,” he added.

Deegan also mentioned that 13 new full-time faculty will be hired for the Fall 2015 semester.

Palomar started the current 2014-2015 fiscal year with a beginning fund balance of $10.5 million and Perez said he estimated the college deficit spent $2.3 million. After everything, the college should come in at $8.3 million which is “right on target,” he said.

Perez went on to talk about the 2015-2016 fiscal year which he said is nothing but great news. He said some one-time funds mean that early numbers point to a balanced budget. Updated budget information from the state will be available in May, he added.