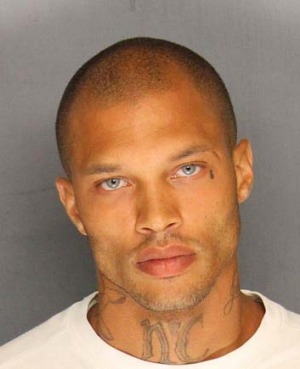 Good-looking or not, criminals are still criminals

Move over, Wyatt Earp. A new wave of criminals has hit the national scene, and these felons aren’t scared to show off their looks.

In the last few months, we have seen a new trend of hot criminals: people with model looks who are committing crimes that make even a white-collar criminal blush. Their mugshots are being spread all across social media platforms, and are gathering attention for all the wrong reasons.

One of the so-called hot criminals being fawned over is the man who started the trend: Jeremy Meeks. According to a written bio on Hollywood Life, he rose to fame after his mugshot was posted on the Facebook page of the Stockton Police Department. On June 18, he was arrested and charged with one felony count of street terrorism as well as a misdemeanor charge for resisting arrest.

When Hollywood Life had written the bio, his mugshot had already had 75,000 likes, over 20,000 comments and 10,000 shares. To me, this is a disturbing fact. Why are we glorifying any form of crime, when we can’t even pay attention to the real issues going on around us? Is it because he happens to be an attractive male?

We don’t think about the people in his life who are affected by this tragedy. HIs mother, Katherine Angier, started a GoFundMe page to raise money for his $1 million bail. His wife, according to his friend Simone Johnson, was furious at some of the comments made about his mugshot. Some of those comments said things like, “Mama, I think I’m in love with a criminal,” and “Wow. That is one good looking mugshot!”

“Her man is in there (jail) and people are taking it as a joke, thinking it’s funny talking about about his looks, saying all kinds of crazy things,” Johnson said.

Even Meeks has gone out of his way to try to squelch these comments, saying he isn’t who the media is portraying him as.

“I appreciate the attention, but I just want them to know that this really is not me. I’m not some kingpin,” Meeks said in an interview with ABC News10 in Stockton.

As proof that the whole trend isn’t just focused on males, even female criminals have been subjected to viral ridicule.

Angela Coates, a 22-year-old who was once a Jet Magazine “Beauty of the Week,” was arrested in Dekalb County, Ga. in August for disorderly conduct. When her mugshot was posted, people across the nation poured out support to her; with some men even offering to pay her bail of $360, according to a tweet by Star FM 91.5 Ibadan.

She was eventually released the same day, going on to Twitter to voice her disgust at how people paid attention to her negative publicity.

“Y’all and this mugshot s—. I was released the same night lol. This is straight comedy,” Coates posted as she confirmed she was released.

Another recent example of a woman who is gathering attention for her steamy looks is 21-year-old Stephanie Beaudoin. A Montreal, Quebec, Canada native, she at one point was a nursing student.

She is now possibly facing life after pleading guilty to 30 counts stemming from 42 break-ins that she allegedly committed with three underage accomplices (ranging from ages 13 to 17). She was charged with crime including burglary and illegal possession of firearms, according to the Huffington Post.

Any normal person would be shamed and commented on in a negative manner to the point where they would probably harm themselves. However, due to some photos of her that were leaked (including some of her clad in a bikini and holding guns), she is being celebrated. Some media outlets are naming her the World’s Sexiest Criminal.

It’s one thing to comment on a woman’s looks. But, when we are focusing on her looks in a mugshot (which isn’t meant to portray a person’s attractiveness), I think our priorities are a little screwed up.

It’s not like they are out there seeking attention. They have made mistakes like everyone else out there. The difference is that they happen to look a little more beautiful than your average criminal. It doesn’t mean that they should be celebrated or cheered on. Nor should they be encouraged to commit more crimes.

Hot or not, these criminals are just that: criminals. Hold them accountable.