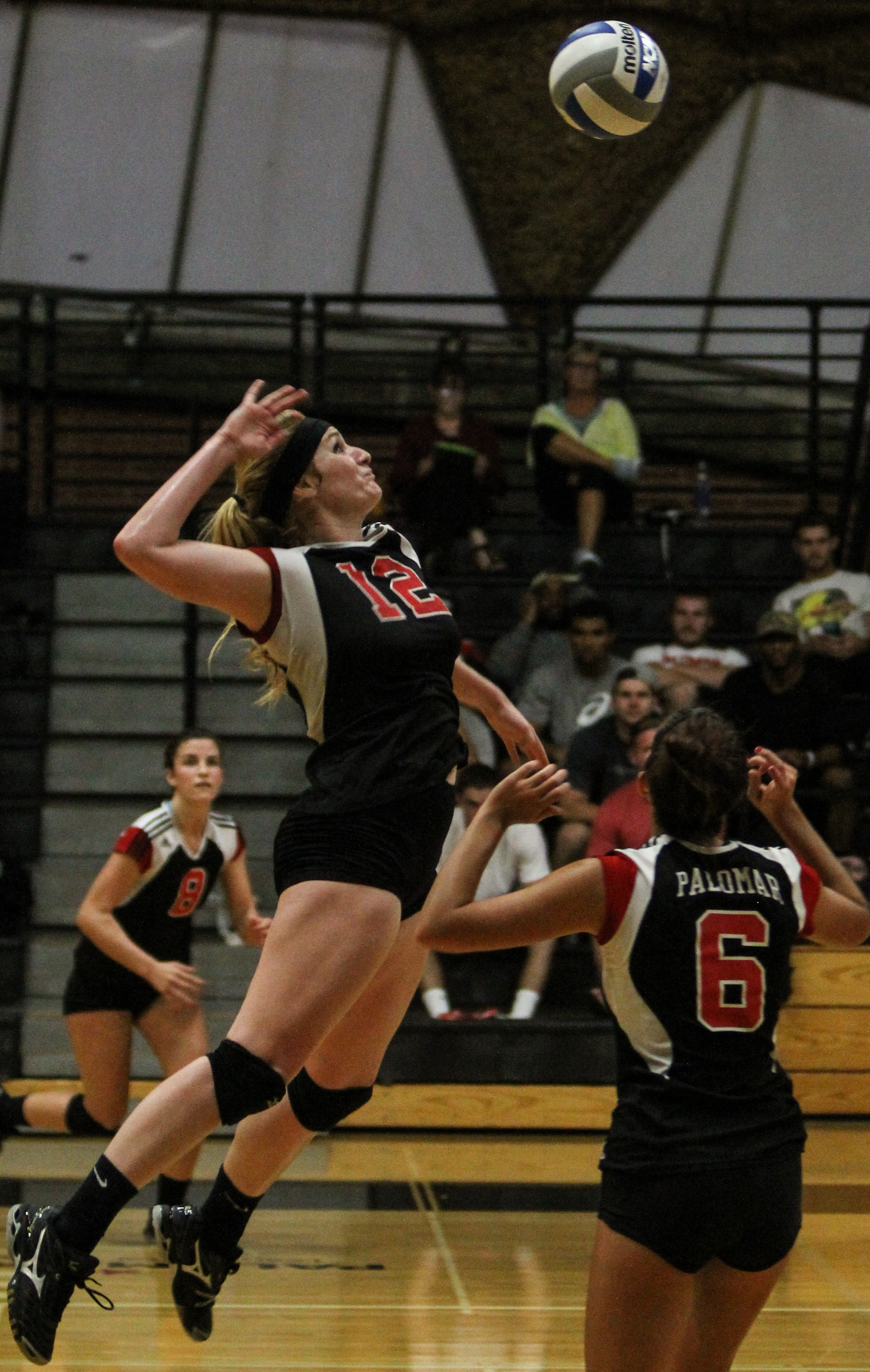 The women’s volleyball team is on a killing spree this year, beating out opposing teams with kills, blocks, digs and assists. The contributions, in large part, come from sophomore and first-team Pacific Coast Athletic Conference athlete Maci Lerno and freshman setter Aspen Luedtke.

In their first tournament of the season, the team defeated Pasadena City College and Chaffey at their first game, sweeping Pasadena 3-0 and Chaffey 3-1, with 23 total kills by Lerno and 59 assists by Luedtke.

Currently, the team is 13-3 on the season and 7-2 in the Pacific Coast Athletic Conference.

Sophomore Maci Lerno is popular for her kills, often leading the team to victory against its opponents.

Fellow teammate Rylee Zimmerman said that Lerno is “one of the strongest players,” adding that “she’s always reliable.”

The five-foot, 10-inch athlete has been involved in volleyball since she was 8 years old and plays softball at Palomar as well. Growing up, she was very involved in sports, participating in swimming, volleyball and soccer as a child and in basketball, and softball in high school. She is majoring in Kinesiology and minoring in Spanish.

Lerno came to Palomar because of its good volleyball and softball team, saying she wanted to attend a college where she could play both sports although volleyball was her main priority.

This is her second year on the volleyball team at Palomar and this upcoming spring will mark her second season playing softball for the college.

She said she is passionate about both sports and hopes to continue playing either one upon transferring to a four-year college although she doesn’t see herself going pro due to the height factor, which plays a large role in obtaining success in the sport.

“My main goal is to transfer to a four-year and keep playing either softball or volleyball,” she said.

But one quality she says sets her apart from other players is that she’s very competitive – a trait derived from a desire to beat out her three sisters who were also very involved in sports and often featured in the local newspaper.

“They made a name for themselves and I was like, I wanna have that someday,” Lerno said in regards to her sisters’ accomplishments.

Lerno said she is grateful for Coach Karl Seiler for teaching her so much and making her a better player as well as all the people on her team and adds that she’s happy she can spend her last year playing with them.

“I feel like this year we’re really close. If something wrong happens on the court there’s someone there to pick it up no matter what. We never give up – I feel like we have a really good connection.”

She adds that without them, “this wouldn’t be happening.”

Coach Seiler, too, is grateful for Lerno’s efforts.

“Maci is really taking on the role of a leader. She’s doing a great job at not only competing but leading the team on and off the court,” he said.

Freshman setter Aspen Luedtke, a recent graduate from Mission Vista High School, has also been a star contributor to the team, providing numerous assists and blocks for the team.

Coach Seiler commented on Luedtke’s work on the court, saying that “she is working really hard” despite the back problems she’s had this season. He added that “she is pretty dynamic as a setter.”

The 5-foot-9-inch athlete has also been involved in several sports throughout her life, including surfing, tennis, swimming, cheer and volleyball. She describes her childhood as “very sporty,” swimming for 21 hours a week from the age of 9 until 13 and actively participating in the other sports previously mentioned.

She is a double major in business and psychology and a double minor in Spanish and journalism.

Aside from being on the Palomar women’s volleyball team, she is a swimmer at the college. She began swimming at a very young age but didn’t discover her love for volleyball until she got to high school.

Luedtke said she joined volleyball just to try it in high school since cheerleading wasn’t offered. She has been playing volleyball ever since. She jokes that she called it “bolleyball” when she first started playing.

She is not yet sure where she wants to transfer but says she wants to keep playing volleyball or participate in swim at a university.

With the season only halfway through, we can expect to see more of the girls’ accomplishments on the court with further kills and even more spiking scores.