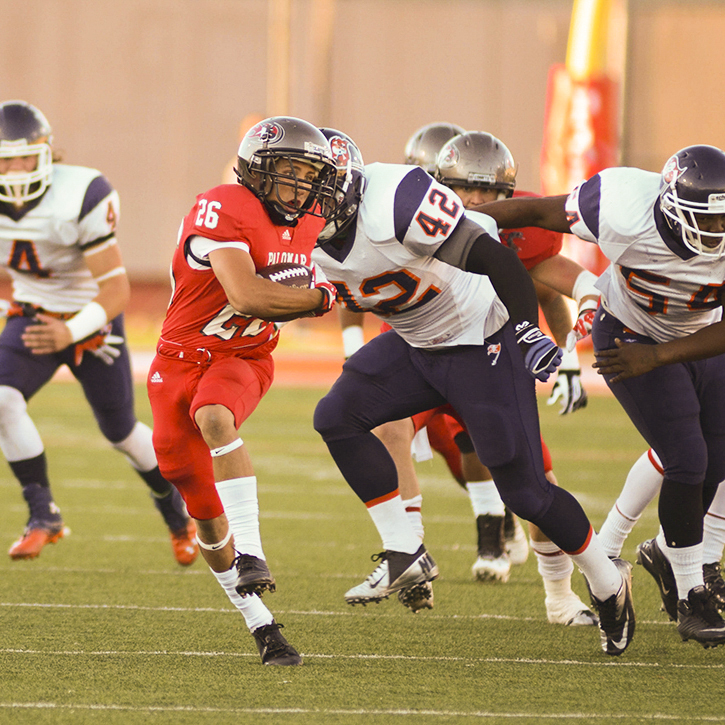 Palomar College’s football team dominated the line of scrimmage as it ran past Orange Coast College to a 38-16 win on Sept. 28.

The key to the entire game rested on the play of the offensive and defensive lines of the Comets. Offensively, the line consistently opened running lanes that allowed Comet running backs to accumulate running yards in the ground game. The defensive line outplayed OCC’s line all night long.

Prior to the game, Palomar Coach Joe Early declared the running game would be the priority in the offensive game plan.

”We’re going to look at different ways to attack them in the ground game.”

That strategy was apparent as the Comets ran the ball 43 times, compared to only nine pass attempts by Quarterback Ryan Lamb. Lamb finished the game with 66 yards and one touchdown pass.

When asked why he had such a big game, Harris responded with three words. “The offensive line.”

The Comet defensive line was in control for just about the entire game, sacking OCC quarterbacks eight times while holding the running game to a total of 72 yards rushing.

Field position played a significant role in the first half, but, unlike previous contests, it was the Comets who benefited. Twice in the first quarter, because of bad punts and large special teams returns, the Comets began drives deep in Orange Coast territory. Palomar College took advantage of their opportunities and scored two touchdowns.

The Orange Coast Pirates kept themselves in the game. OCC had a few scoring drives in the first half, resulting in a couple of field goals and a touchdown pass set up by a 59-yard pass play from OCC Quarterback Jon Newsome to receiver D.J. McFadden.

The beginning of the second half was a stalemate, as neither team was able to establish anything offensively. The Comets sustained one long drive that resulted in a field goal at the start of the fourth quarter.

The turning point was when there were 5 minutes left on the clock. OCC was kicking off to Palomar after scoring a field goal, crawling its way back into contention when Earvin Simmons returned the kickoff for a 95-yard touchdown. The score broke the game wide open and ended any chance the Pirates had of winning.

For all that Palomar did right to win, the game was far from clean and left room for improvement, Early said. The Comets were penalized eight times for 71 yards, while OCC was only penalized six times for a measly 37 yards.

The timing of the penalties was crucial; there were personal foul and false start penalties which stalled drives for the offense and kept drives alive for OCC. One negated a touchdown pass for field goal. Khali Sanders mishandled an OCC punt which led to a field goal just before halftime.