We were honored to be invited by Lionsgate to interview actor Luke Kleintank, one of the stars of the film ‘Midway‘ at the USS Midway Museum in San Diego, CA. Best known for his roles as Finn Abernathy in Bones and Joe Blake in The Man in the High Castle, Luke portrayed Clarence Dickinson, an honorary WW2 veteran who is centered around the events that unfolded during the Battle of Midway in the WW2 era.

The actor stated multiple reasons as to why he wanted to be a part of this film: his pure fascination with the Battle of Midway, and the opportunities to work with director Roland Emmerich and the all-star ensemble cast (includes Woody Harrelson, Dennis Quaid, Luke Evans, etc.). His fascination with this important war event in American history is inspired by his family’s involvement in the war: his grandfather was a WW2 veteran. Taking on this role meant not only getting a glimpse, but also honoring his family’s legacy. 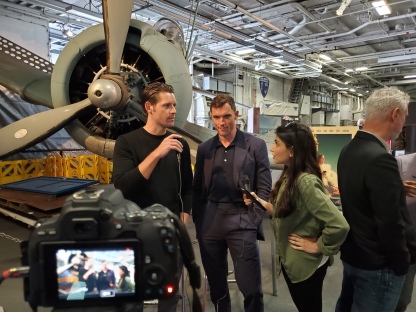 From the very beginning, Kleintank sought Dickinson’s role. During our interview, he disclosed that the real-life Dickinson wrote a book titled The Flying Guns, which explains his experiences from Pearl Harbor to the end of Midway. It is evident that Kleintank holds an enormous amount of respect and admiration for Clarence Dickinson, as the actor mentioned that the veteran was the first and only navel officer to receive three navel crosses; Kleintank also made efforts in visiting Dickinson’s grave in Hawaii.

Get ready to soak up some history this Veterans Day weekend – Catch ‘Midway‘ flying to a theater near you on Friday, November 8th!

Host: Machelle Noel here at the USS Midway Museum in San Diego. Joining me right now are actors Ed Skrein and Luke Kleintank to talk about their upcoming movie Midway, so guys thank you so much for being here.

Host: And specially in San Diego sharing you movie here.

Host: So, 2019 has been a really good year for you Ed with Maleficent, Alita and now Midway, can you tell us a little bit about this movie and your character as well?

Ed Skrein: This movie has been an experience unlike any professional experience I’ve ever had. It was kind of an emotionally heavy, poignant piece from the moment that I entered it, to the moment I read the script, to the moment we arrived in Pearl Harbor to shooting the rest of it in Montréal and I think I can speak for Luke and the rest of the cast in that regard that we all felt this real incredible kind of sense of seriousness. I don’t mean to make this a serious interview and I don’t mean to paint a picture that we weren’t having fun and smiling and joking on set, but it was a serious responsibility to be respectful to these men. These were real life men with surviving family members, so there is not only the context of history, but there is a current importance to it as well, so it was an amazing experience, very different form Alita.

Ed Skrein: And Maleficent, although I was flying in Maleficent as well, but I had my own wings there. It would have been a lot easier to attack-

Host: There seems to be a pattern here-

Ed Skrein: Yeah, yeah it would have been easier to attack the carries as Borra, but anyway that’s another story, but yeah it was great.

Host: Awesome, and Luke, what inspired you to be apart of this this movie and the reason why you wanted to take on this role?

Ed Skrein: And you do learn so much from experienced actors don’t you? I mean me and Luke have quite a bit of experience between us already, but yeah it’s another level when you’re taking about what Denis and Woody and Patrick have done just in terms of numbers, so you do learn and you do analyze these older actors and you do try to take some lessons from them and learn from their experience.

Host: It was an all-star, A-list cast especially the music background with Nick Jonas and Mandy so that was really interesting to see that camaraderie. And when it came to the film, did you guys intend to audition for Best and for Dickinson or was there somebody else that you were interested in?