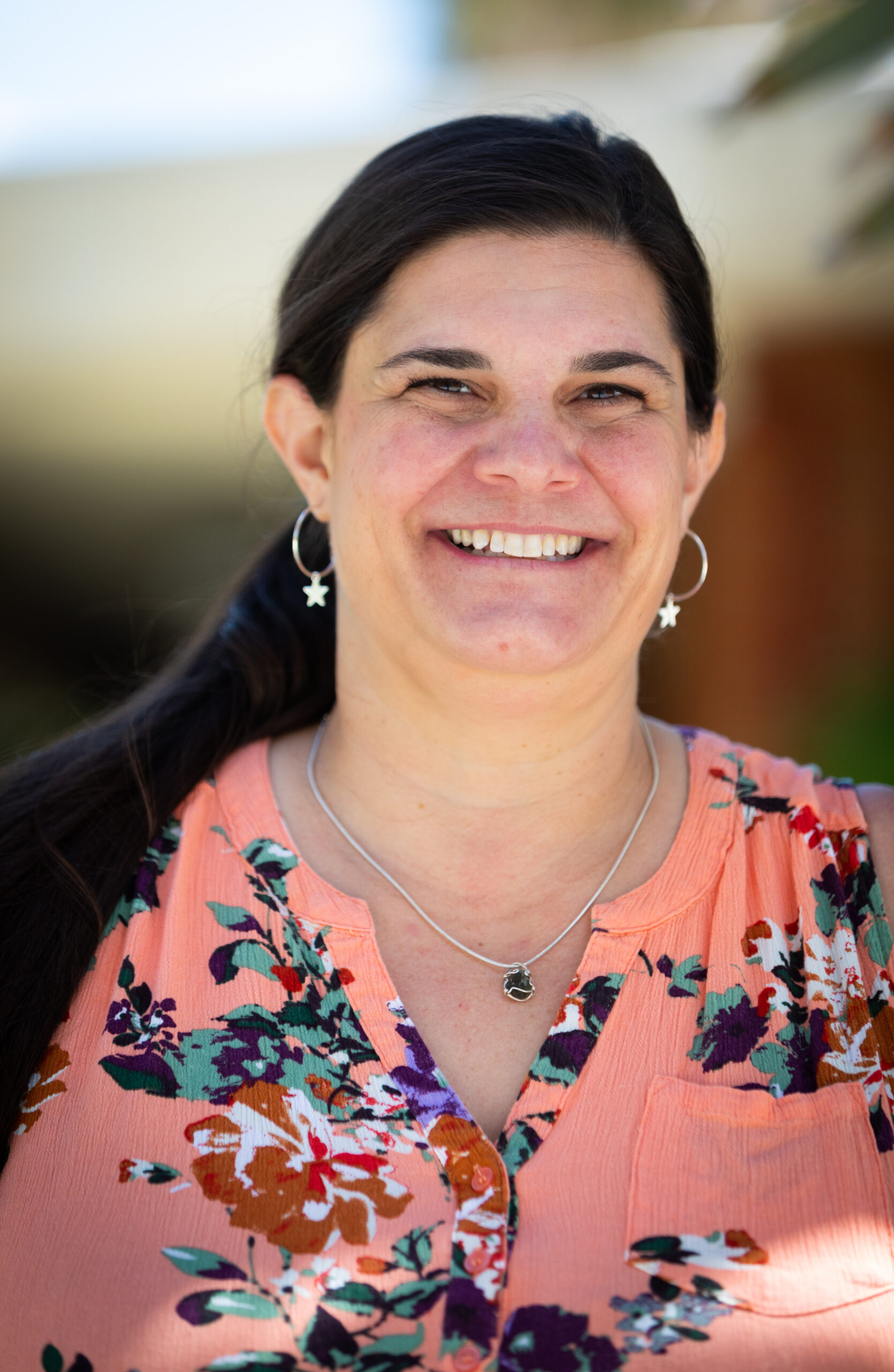 Editor’s Note: The following transcript has been edited for clarity and brevity. It is not verbatim.

Mom, chef, and business owner Michelle Rains is running for Palomar Governing Board District 4 (Valley Center, Ramona, Hidden Meadows, and Poway). She answered a series of student-focused questions generated by reporters from The Telescope. Read what they said here.

The Telescope: Tell us about yourself and the last book you read.

Michelle Rains: A little bit about myself, I’m 41 years old, I grew up in Ramona. I own a business called Cheers of Ramona. I ran it for about six years. I have five children, I’m the Brady Bunch family, ages range from 16 to 12. The last book… I’m actually always reading The Pocket by Thich Nhat Hanh who is a Vietnamese Buddhist monk. I always pick it up when I need a little grounding or balance.

The Telescope: Who are your influences?

Michelle Rains: My influences would be my father. He was a graduate from the United States Naval Academy. He helped build over 38 US embassies all over the world. And I grew up at a young age learning from him that honesty and hard work go a long way. And if you always do the right thing, everything will eventually hopefully work out for you. And he passed away last year so I’m really kind of running to make him proud in a way and serve my community.

The Telescope: Why are you running for the governing board?

Michelle Rains: I’m running for community service, for purpose, and trying to help the community. I don’t really have any special interests. I was a student at Palomar for a short time and I’d like to see the students being represented better than they are now. I think part of the reason the school is in such a big debt is because of who’s been on the board and been elected with and by special interest groups.

The Telescope: What skills and experiences do you have that will make you a good governing board leader?

Michelle Rains: Well right now, two years ago, I was elected to the Ramona Community Planning Group, which is the land management, kind of like the small government. We’re kind of like the town council. So I’m already a leader in Ramona. I run a business, it’s a small business, but we made it through the pandemic and so I have a lot of not only integrity, but I want to say perseverance. So, you know, I have a lot of personal and professional experiences that I think are valuable.

The Telescope: You mentioned that you attended Palomar for a little while. How long were you here and what did you study?

Michelle Rains: It was only two semesters and it was while I was a chef at a detox center in Ramona. It was a small ten-bedroom detox facility, and I was cooking for people detoxing from drugs and alcohol. And that’s when I talked to them more than a lot of the counselors, so I started doing the AODS program, which is Alcohol and Other Drug Studies. So I took a couple of classes so I could learn how to talk to the patients there.

The Telescope: Do you have any other prior experiences with Palomar?

Michelle Rains: Well I went to high school in Ramona so you know, I always saw the Palomar presence, going to school there. And the perception I had and I think what a lot of high-school students have, are community colleges aren’t as good as four-year colleges. You know, if you’re going to go to college, go to a four-year college because otherwise, you’re not going to be successful or whatever. I think there’s a bad perception about community colleges and I think that’s something that needs to change because I think a lot of high-school students are just pressured into going to four-year colleges and not seeing what’s out there and seeing you know, you can go and learn a trade work in the trade, pay for your school and not be in debt.

The Telescope: What’s one thing you like about Palomar and one thing that you would change?

Michelle Rains: The diversity. I think San Diego is very diverse and Palomar is a diverse community. San Diego, we have all different kinds of, you know, people coming in and there’s a lot of different classes and stuff offered at Palomar. One thing I’d like to see change is having the school go into a better fiscal state than it is now. I think that there’s been problems with debt at the school and I would hate to see it get into a worse situation where the students are, are hurting more than the staff. Or the teachers. So I think that’s important.

The Telescope: What are some of your short-term and long-term goals both with Palomar and personally?

Michelle Rains: Short-term goals would be working on the fiscal part of the school, the F.F (faculty federation) kind of gave specific guidelines on how to repair the state that the school is in.

Long-term goals, I would like to see the classes being offered more days a week. I think they’re cutting them down to like four days a week and this is a massive school. If you can work with the students and staff and have a more flexible schedule, I think that would be nice. Also, introduce a culinary program back to Palomar. They did have one a few years ago, but it wasn’t very good. That was one of the reasons I didn’t attend culinary school here. It was because it was just lacking, you know, and I went to a culinary school that operated three restaurants within a very small school. So I would like to see a restaurant operated by students and staff and have that be an income for Palomar as well.

The Telescope: What resources do you think students are currently lacking? And how would you make those available?

Michelle Rains: I think that lacking staff is across the board and in San Diego, and I think a lot of it is due to lack of, you know, just simple education like in training. A lot of people don’t know how to cook anymore. For a few classes, especially at the satellite campuses, you know, not everybody can get down to Palomar, especially in my district, which I don’t know if you guys have ever driven out to Borrego Springs or Julian. It took me a greater part of an hour just to get here. So I think opening more opportunities to the whole community, not just centrally around here.

The Telescope: How do you plan to do that?

Michelle Rains: Increasing the classes at the pilot locations, you know, in Rancho Bernardo in Escondido, and Ramona. A lot of the high school class trade classes and electives have gotten cut. And I think, wouldn’t it be great for Palomar not only to offer English and math classes where you can take college classes in high school, but I think you should be able to start taking trade classes in high school as your electives to work towards certificates. So as soon as you get out of high school, you have some experience and you can go and get a job.

The Telescope: Have you spoken to the faculty about the merits and concerns of AB1705? And what perspective did you gain?

Michelle Rains: I actually haven’t had a chance to speak to many faculty about it. I was surprised that the teachers union and the faculty union endorsed my opponent before even speaking to me at all. So that goes back to special interests. You know, I don’t have any special interests. I’m not getting endorsed by any unions. I’m just a simple business person.

As far as the AB1705 I think it has its pros and cons. I think, you know, not everyone coming from high school is going to be able to do every math class. I think they need to test into their math class and get put in the correct class that they need, whether it’s a lower type of math. For myself, I didn’t do well in math in high school, and that was one of the things that were hindering me from going to college. I didn’t take calculus in high school, you know. So I think it’s appropriate, but do I think that it’s getting abused by colleges and putting people into classes that they don’t necessarily need? Sure. But that goes to accountability. And you know, it just takes someone saying, “Hey, what’s right.”

The Telescope: How often do you visit campus and interact directly with students and staff?

Michelle Rains: I would like to when I get acquainted. I would like to come down and meet with students and staff. I feel like I’m kind of one of the younger candidates for the trustee program, and I think I can relate to college-age students a little bit better than maybe somebody else.

The Telescope: How do you plan on boosting enrollment?

Michelle Rains: One of the previous answers was focusing on the high-school students, and making sure they’re aware that there are more opportunities than just going into academia and getting a four-year degree. Also being more of a community college; what does our community need for education? What does our community want?

Also, I think it would be important for some of the meetings, the trustee meetings to be at the pilot campuses and the satellite campuses so, if the trustees drive out to Ramona and say, “Oh, this is far, you know, the students are driving this far,” So I think I think that would open their eyes.

The Telescope: If you were elected, where would you want to see Palomar four years from now? And how would you get us there?

The Telescope: Do you think Palomar should provide affordable on-campus student housing, and if so, how would you help that?

Michelle Rains: I would look into state funding for housing. I think it’s important. Like I said before, students coming from Borrego Springs or Julian, that’s way too far to go to school five days a week. I mean, paying for gas alone, you need a full-time job just for that. So I think it would be important, but I also think it’s important to do it right. I think there’s a lot that goes into student housing, it’s not just an apartment, and we don’t like to see it be just thrown together. I think it needs to be done right. You know, with safety and all the resources that are necessary for student housing. But I think state funding would be, since the schools in the state that it’s in, you know, a few million dollar deficit, that state funding would be appropriate.

The Telescope: Is there anything else you’d like us to know about you?

Michelle Rains: So I ran for the Ramona community planning group, to be part of the community and represent the community because I’m a mom. I’m a business person. You know, I have lived there for over 30 years, and I think I’m just a really good person to represent normal I want to say, you know, average people. So I think that’s, that’s one thing that our government’s lacking is normal people that have experience and can bring that and that wisdom to the table.