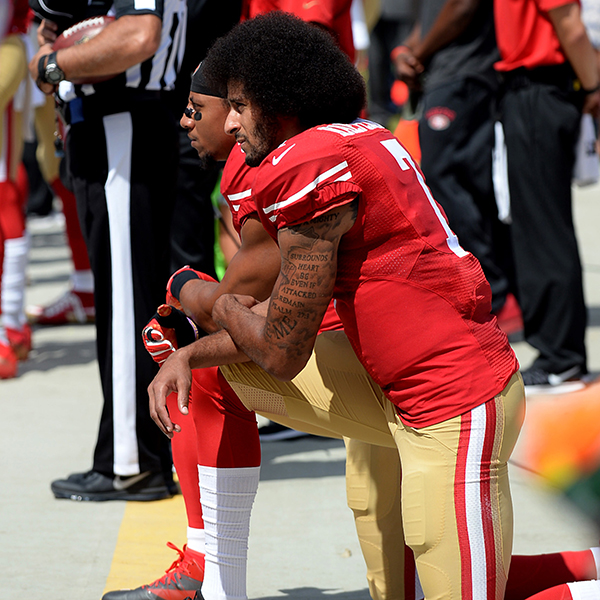 Kaepernick takes a stand for mistreatment of minorities in U.S.

As minorities are continuously being discriminated against, an NFL quarterback takes matters into his own hands.

Colin Kaepernick, quarterback of the San Francisco Forty-Niners, decided not to stand for the national anthem at a preseason game in Santa Clara, Calif. against the Green Bay Packers, making it public for others to see.

Colin Kaepernick stated, “I’m not going to stand up to show pride in a flag for a country that oppresses black people and people of color. To me, this is bigger than football and it would be selfish on my part to look the other way. There are bodies in the street and people getting paid leave and getting aw

I would take the same stand as Kaepernick because people should get along with each other and live in peace and harmony no matter what skin color you are. Sadly, there are people who are corrupt and want to do harm to others out of what ever emotions or feelings they have toward other people.

He’s not trying to smash on cops, because some of his family members and friends are in law enforcement. These law enforcement personnel save lives every day and help society by taking crime off the streets. I’m hopeful there will be change. That action is taken to insure that corrupt cops don’t get away with unnecessary violence and killing, and that any corruption in the police departments can be dealt with.

Anyone watching the preseason matchup between the Chargers and the Forty Niners in San Diego could hear the roaring heckles directed toward Kaepernick whenever he stepped onto the field. The Chargers were holding their Military Appreciation Night, so there were plenty of veterans and military troops there attending the game who could’ve taken offense to Kaepernick’s remarks.

Some people are outraged and feel that he is disrespecting our country, the American flag and that he is disrespecting the nation’s service members. Men and women who fought hard for our country by sacrificing their lives for us to have freedom. Others are siding with him on his stand for supporting minorities and trying to bring awareness to the wrongdoings happening to them.

Through all the noise directed towards Kaepernick’s controversial stand, he remains steadfast in his decision to remain sitting during the national anthem until police brutality against the black community gets dealt with.

President Obama has even voiced his thoughts on Kaepernick’s decision to not stand for the anthem. “Colin Kaepernick is using his Constitutional rights,” Obama said. “He thinks he cares about some real, legitimate issues that have to be talked about.”

So no matter what others think, the First Amendment clearly states that we have the right to express our freedom of speech and expression without government interference. That’s what’s great about this country, we can say or do what we want without being punished or scrutinized.

I’m glad that I live in a country where people can take a stand and show their pride in what they believe in.