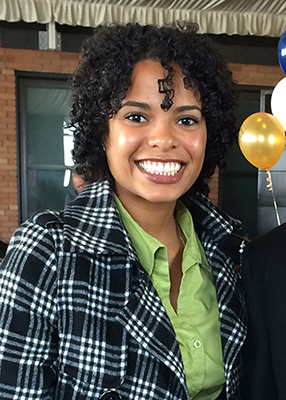 SAN MARCOS (August 6, 2015) –Palomar College student Maylin Caldwell was named along with nine other two-year college students nationwide as a recipient of the 2015 Phi Theta Kappa Hites Transfer Scholarship. The 10 students together are receiving a total of $75,000 to assist in the attainment of baccalaureate degrees.

Scholarships of $7,500 each have been awarded to each of this year’s 10 Hites Scholars. Students enrolled in associate degree programs and preparing to transfer to a regionally-accredited baccalaureate degree-granting senior institution in the fall of 2015 were eligible to apply. Judges reviewed and scored applications for academic rigor, leadership and engagement. The 2015 Hites Transfer Scholars were selected from more than 2,100 applicants worldwide.

This is the second year Caldwell has received a Phi Theta Kappa award. Last year, she was recognized as an “outstanding scholar” and selected for the Phi Theta Kappa All California Academic Team along with Palomar College student Anh Tran. Caldwell and Tran were honored at an awards luncheon in Sacramento by the Community College League of California (CCLC).

Caldwell, who was a tutor in Palomar’s Science, Technology, Engineering and Mathematics (STEM) Center this past year, has served as vice president of Palomar’s Alpha Omega Rho chapter of Phi Theta Kappa (PTK). Katy French, associate professor of library technology and one of the club’s advisors said of Caldwell, “Maylin possesses the energy, attitude and communication skills of a great leader…. she is devoted to improving herself and the lives of others.   I was thrilled to learn that she won the Hites Scholarship and can add that to her other academic successes.”

The 2015 Hites Transfer Scholarship recipients are:

The Hites Family Community College Scholarship Foundation was established by Robert Hites, an executive with Ralston-Purina in St. Louis, Missouri. Upon his retirement he fulfilled a lifelong dream and became an instructor at St. Louis Community College.

Hites turned down opportunities to teach at prestigious senior institutions because he valued the educational experience offered by community colleges and he witnessed the determination and will to succeed of his community college students. He also came to understand their needs and was determined to help them achieve their dreams, as he had achieved his.

Ray Hites, President of the Hites Family Community College Scholarship Foundation and Robert’s brother, served as a Trustee for the Phi Theta Kappa Foundation until his death in 2015. His wife, Jackie Hites, now serves as a Trustee.

Phi Theta Kappa, headquartered in Jackson, Mississippi, is the largest honor society in higher education with 1,285 chapters on college campuses in all 50 of the United States, U.S. territorial possessions and eight sovereign nations. More than 3 million students have been inducted since its founding in 1918, with approximately 134,000 students inducted annually.

For more information about the Phi Theta Kappa, go to http://www.ptk.org/Home.aspx