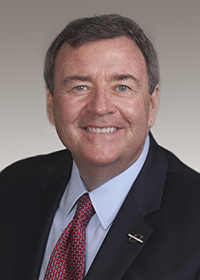 (SAN MARCOS, CA – October 15, 2014) Robert P. Deegan, Superintendent/President of Palomar College, announced today in an all-campus forum that he will retire in June 2015.  He indicated that his decision – which he has been contemplating for some months – was made with strategic consideration for the college.

In his announcement to the campus, Deegan expressed great pride in the college, noting particular achievements in student success during his tenure. He shared, “We have all worked hard together on behalf of our students and I am particularly proud that we have experienced record numbers of graduates these past few years.  We have succeeded in helping thousands of students transfer to four-year colleges.  In addition, countless students have obtained career and technical certificates designed to provide the skills necessary to obtain meaningful employment in specific fields.  Together, we have been able to transform the facilities at the college, making it one of the best in California.  I will be able to leave my post knowing that in spite of the tough economic challenges facing our state, we’ve been able to help record numbers of students obtain record numbers of degrees.  I am confident that in the years to come, Palomar College will continue to be one of the top comprehensive community colleges in the country.”

Under Deegan’s leadership, Palomar College passed Proposition M in November 2006; the $694 million general obligation bond was the largest passed by a single college district in the history of the California Community Colleges. With the support of the Governing Board and the college community, he began the process of transforming the district’s facilities.  Starting with construction of the Natural Sciences building during the early years of his tenure (the first building constructed on campus in 25 years), more than 10 projects have been completed, including:  the Health Sciences Building; Multidisciplinary Building; Palomar Planetarium; Industrial Technology Center; Performing Arts Complex; Escondido Center remodel; T-Building remodel; the Teaching and Learning Center (San Marcos) and the Humanities Building.  Additionally, there are approximately three projects underway including the Baseball Field relocation; the Child Development Center; and the Library.

By June 2015, Deegan will have served Palomar College for more than 10 years. In addition to the Proposition M projects, among particularly notable accomplishments during his administration are the addition of a Science, Technology, Engineering and Mathematics (STEM) Center; new Teaching and Learning Centers (in San Marcos and the Escondido Center); a Veterans Lounge; a Pride Center (to support the college’s LGBTQ community); a new Career Center; and the college’s distinction of being identified as a Hispanic Serving Institution.

Deegan is particularly proud of the Hispanic Serving Institution designation; however, he indicated that he is even more proud that the college is a Hispanic graduating institution.  “We have been notified that we rank in the top three percent of the nearly 1,200 community colleges nationwide in the number of Latino graduates.  We are number one in San Diego County among all community colleges,” he said.

In spite of one of the state’s worst economic crises, Deegan has provided strong leadership to Palomar College, avoiding employee layoffs, salary cuts, or losses in benefits.  According to Governing Board President Paul McNamara, “Under President Deegan, the college has been able to accomplish great things, including a strong building program.  His commitment to the students, faculty and staff has been obvious throughout his tenure and he will be greatly missed.  We look forward to having him with us through June 30, 2015.”