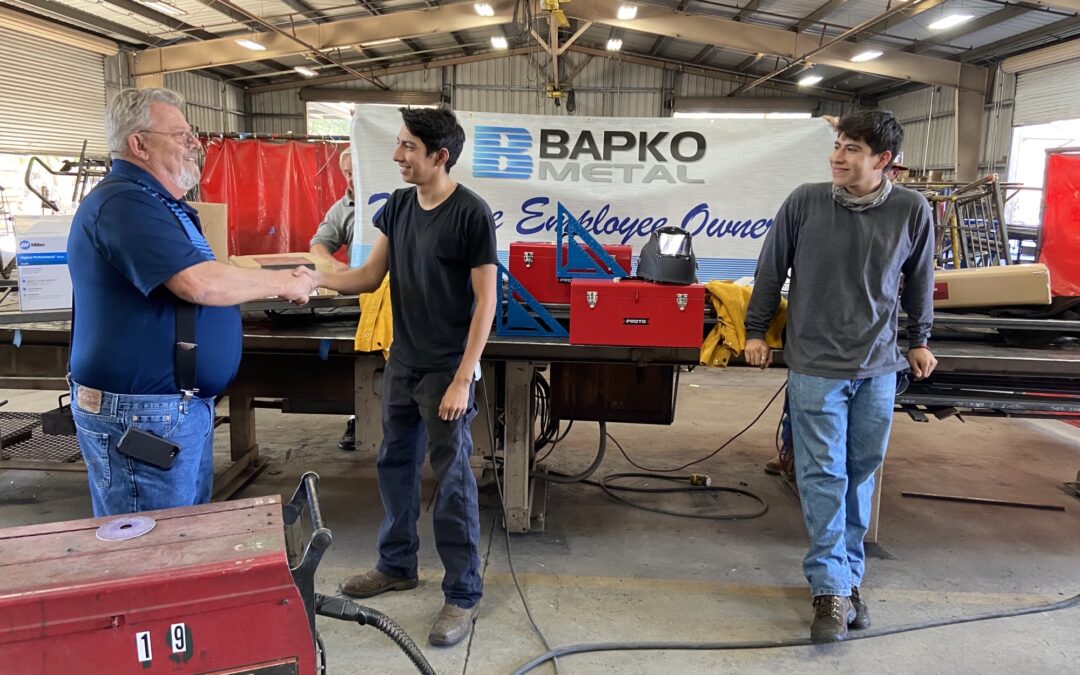 A key industry partnership yields new tools for new hires as recent Palomar graduates get started in their welding careers with a local company.

SAN MARCOS — Two graduates of Palomar’s Welding Technology program were recently hired by an award-winning San Diego metal fabricator and provided with new sets of tools as part of a scholarship provided by Project Cornerstone and Palomar College.

The scholarship was provided through a partnership between Palomar and Project Cornerstone, a nonprofit based in San Diego that is dedicated to creating awareness and opportunities for students to choose a career in the construction industry and related fields.

“Juan and Elian’s success at Palomar and employment in the region’s workforce exemplifies the impact our students have in today’s economy,” said Dr. Star Rivera-Lacey, Superintendent/President of Palomar College. “We look forward to many more success stories like this one as a result of Palomar’s ongoing work with local and regional industry partners.”

In the welding field, as in other trades, it’s customary for workers to own some of the tools that they use on the job. But for those who are just starting out, the cost can be a serious barrier to entry in the job market.

Jerry Sanders, the Production Manager at Bapko San Diego, said Cortez and Martinez were the second and third welders he has hired from Palomar College, and that he is looking forward to hiring more from the program in the future.

“As soon as I saw two other applicants from Palomar, I grabbed them. The training regimen at Palomar is really top-notch,” he said. “They are great workers, with a great work ethic, and received quality training in their certifications. I really value our partnership with Palomar’s welding program.”

Cortez graduated from Palomar in May with an Associate of Science in Welding Technology and landed his job at Bapko in July: “There’s a lot of things you learn in the field, and the program at Palomar really prepared me for what to expect,” he said. “Palomar taught us to take pride in our work.”

He said he feels that he has found his career path, and of his new tools, he added,  “The day I got them, I started using them.”

Martinez also graduated in May with his Associate of Science in Welding Technology, and says that he received additional career preparation from Project Cornerstone during his final semesters at Palomar.

“I got a lot of support in developing my resume, trying to find jobs, trying to identify which path of welding I wanted to pursue—structural, production or architectural. We also did some tours to local companies,” Martinez recalled. “Everything I learned at Palomar I’m putting to use in my job—all those skills that our instructors taught us, I can use them right away.”

“We are proud to partner with Palomar College by offering our Tool and Equipment Scholarship that awards students with the tools they need to get started in their career,” Howard said. “This scholarship program benefits both the student and the employer, and we are continually seeking those win-win opportunities while doing our part to help solve the construction labor shortage.”