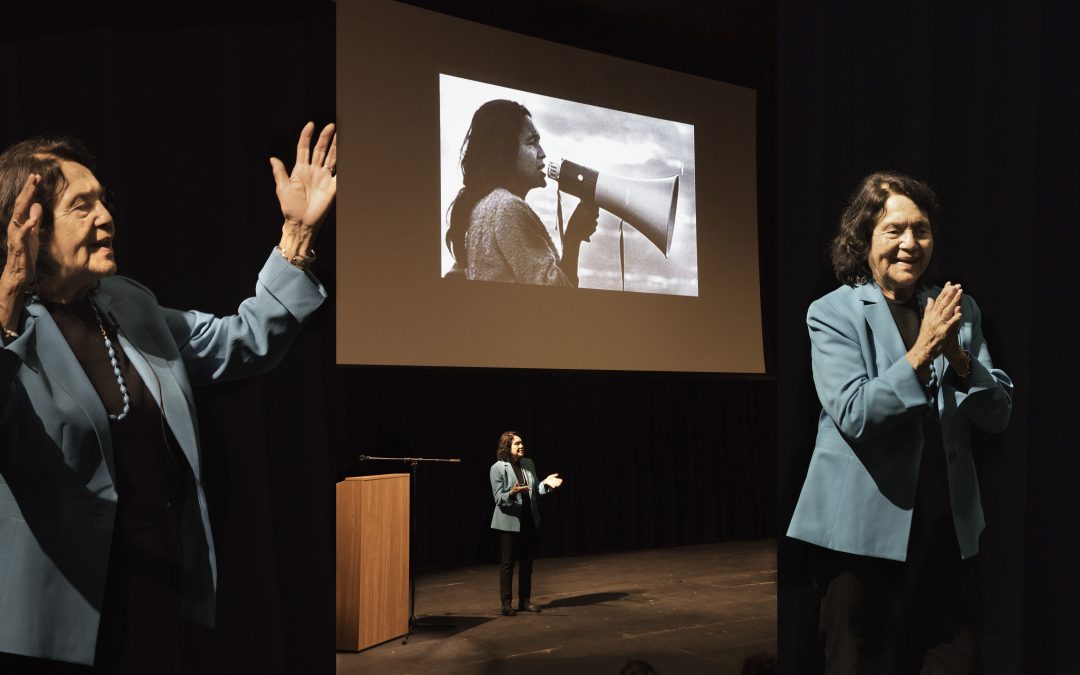 Interim Superintendent/President Adrian Gonzales said, “I was honored to introduce Dolores Huerta as Palomar’s featured speaker for Equity week. She is a true inspiration and sets a wonderful example for our students and the community of someone who has made a significant difference through her tireless work toward bettering the lives of a great many people.”

Prior to Huerta’s address, the film The Struggle in the Fields (part of a PBS series) was shown, which provided historical context by documenting Huerta’s efforts, along with those of Cesar Chavez and other activists in organizing farm workers for better working conditions during the 60s, 70s and beyond.

Huerta, 85, shared stories about her work alongside Chavez and others organizing California farm workers, launching the National Farm Workers Association (NFWA), and lobbying effectively for the passage of legislation protecting the health and welfare of farm workers and their families. Her efforts led to securing Aid for Dependent Families (AFDC) and the establishment of the Agricultural Labor Relations Act of 1975, granting farm workers in California the right to collectively organize and bargain for better wages and working conditions.

In a talk peppered with humor, Huerta discussed the importance of education and advocating for children’s rights. She also covered a number of issues facing people today, including women’s equality and the current political climate. Answering follow-up questions from audience members, Huerta encouraged people to get involved in causes relevant to them, suggesting voter registration drives and political campaigns as good places to begin. She also referred to the act of voting as a one of the most powerful forms of nonviolent activism.

After her presentation, a large number of audience members lined up from the side of the theatre to the stage for the opportunity to speak with Huerta personally and/or be photographed with Huerta. She also signed a number of autographs.

Huerta has won numerous awards and honors for her contributions to the betterment of society, including the Ellis Island Media of Freedom Award (1993), the Eleanor Roosevelt Award (1998) and the Presidential Medal of Freedom from President Obama in 2012.

Olga Diaz, Director of Student Success & Equity at Palomar said that during Equity Week community colleges throughout the region are “featuring activities and speakers to engage our students/faculty/staff and community members in dialogue about recognizing inequity and taking action to achieve equity through education.”