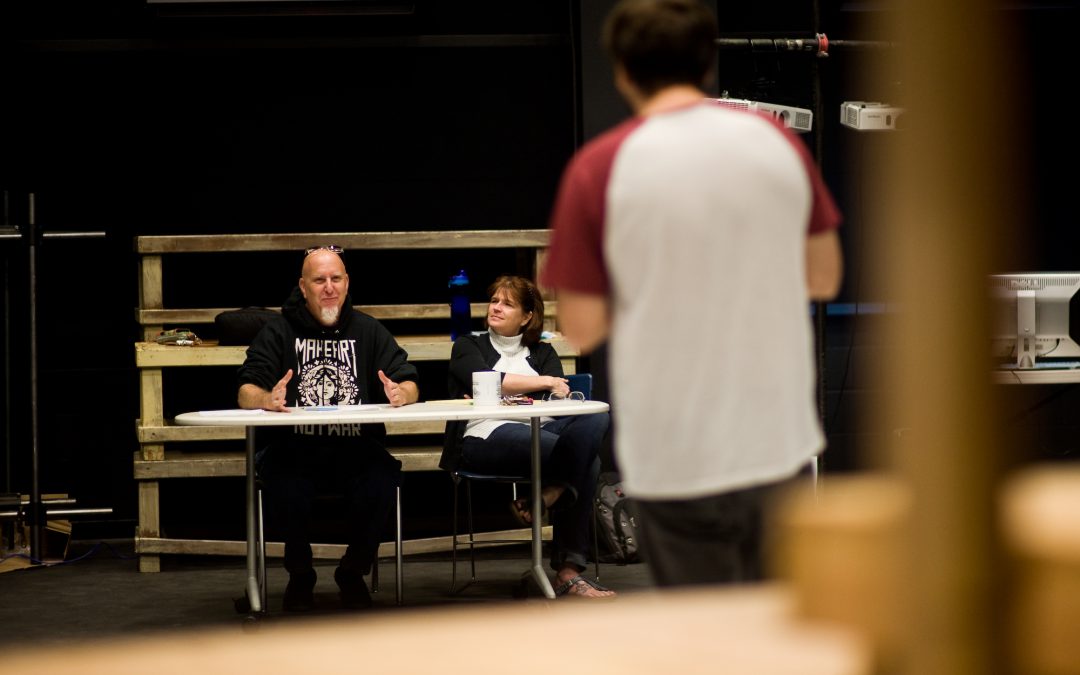 SAN MARCOS — As the first week of school came to a close on a recent Friday evening at Palomar College, students began filing one-by-one into the “black box” theater on the south end of campus.

They carried within their memories short monologues to perform for Michael Mufson, a Theater Arts professor whose task was to choose the 20 or so actors he would need to stage an adaptation of Aldous Huxley’s “Brave New World.”

“I was in a book club in high school and I think that’s where it started,” Murphy said. “I’m interested in theater that (addresses) subjects people are uncomfortable talking about. It’s pushing people’s boundaries.”

Since it was published in 1932, “Brave New World” has been doing just that. Mufson, who spent the summer re-reading the novel and revising a 1970s-era stage adaptation for Palomar’s theater, described it as one of two books that ushered in the genre of dystopian fiction.

“In ‘1984,’ order and stability are enforced through fear and pain and surveillance—a police state. In ‘Brave New World,’ order and stability and conformity are enforced through pleasure and mind conditioning—making everyone truly content, truly happy,” he explained. “It really is very reflective of where our culture is going. It’s this consumer society where everyone is kept in perpetual adolescence.” 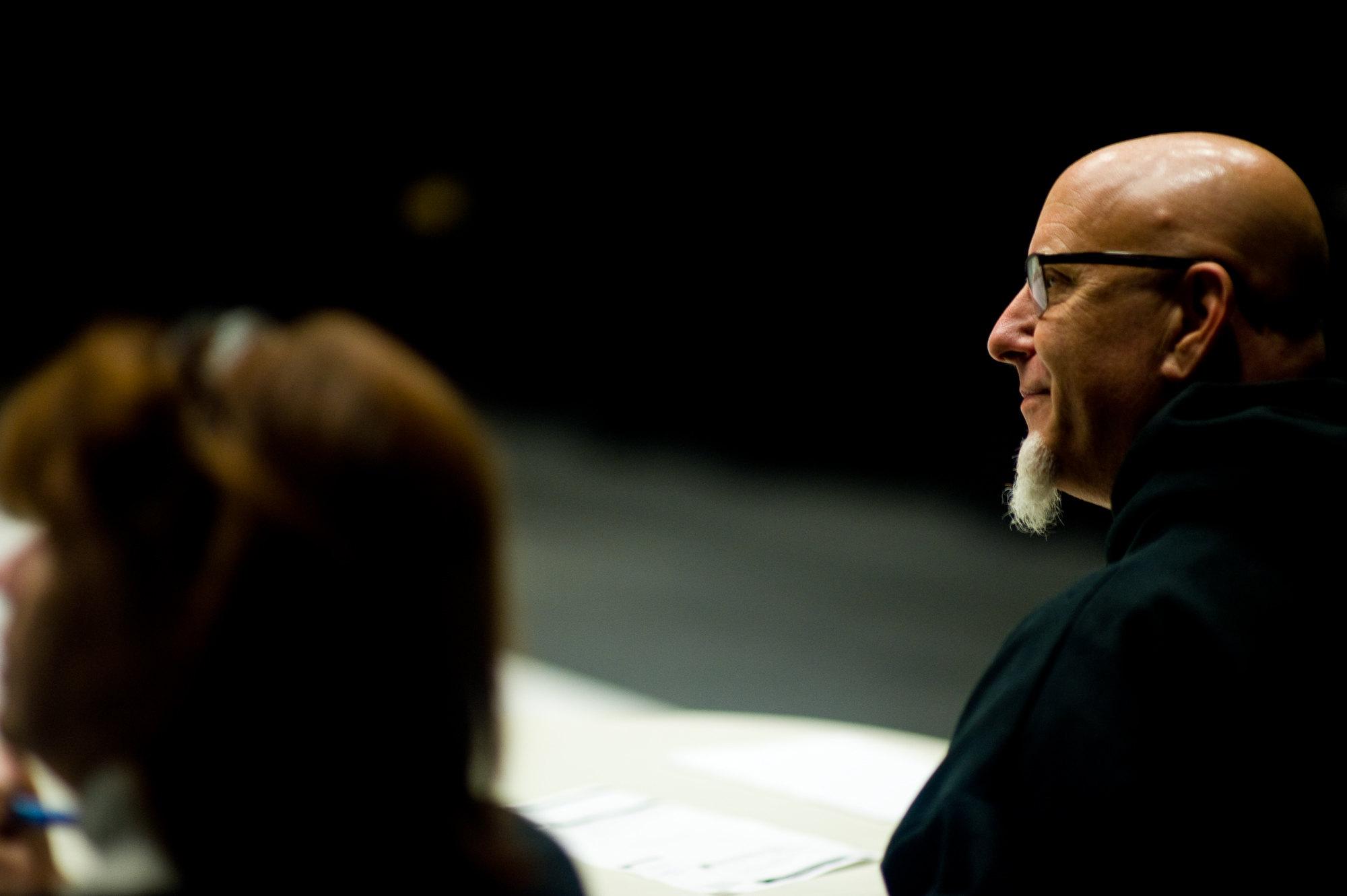 Mufson knew before he started on the script that “Brave New World” would be staged in the “black box,” which was built four years ago and has hosted a dozen productions.

Roughly the dimensions of a square, with towering ceilings and tall black curtains draped around the walls, the space is a cross between a traditional theater and a dance studio.

“The audience loves it. You really get that intimate connection with the actors—you can see their expression, you can usually hear them pretty well, and you can feel their energy,” he said. “The actors love it, too, because you get fed that energy that comes from having the audience all around you.”

Molly Faulkner, a Palomar dance instructor who is helping produce the show, recalled sitting inside the “black box” to see last year’s production of “Facing Our Truth,” about the killing of Trayvon Martin.

“Literally, I was sitting almost on the stage,” said Faulkner. “To have that kind of visceral experience was astounding. You’re in it with the actors, at that point.”

Mufson said he is thrilled to combine those dynamics with the story of “New World.”

“For this show, the word is ‘immersion’—people are going to feel like they’ve entered into a whole other world,” he said, adding that, in a traditional theater, “the world is there on the stage, and you’re sitting out here, from a distance, watching it through a frame. Here, you walk in, and you’re in the world.”

The first performance is Friday, Sept. 29; admission starts at $10. Purchase your tickets online.

“Brave New World” received a major theatrical adaptation in London two years ago, but Mufson said that script was unavailable. (He even tracked down the writer’s agent in London to try accessing it for the Palomar show.)

He ended up with a script that he suspects was written for a high school production in the 1970s: “I’ve done a lot of tweaking to it myself. A lot of my changes were just pulling Huxley’s dialog and language right out of the novel. It will be more true to the novel in a number of ways.”

Writing 86 years ago, Huxley stretched his imagination as far into the future as he could, but he still couldn’t imagine some of the marvels that would be commonplace at the turn of the century.

“I’m trying to be really respectful of Aldous Huxley, but we’re making some little changes to make it feel like a contemporary future, rather than an antiquated future, because it was written in the 1930s,” said Mufson.

Among the themes that resonate with modern audiences is the psychological conditioning that the book’s characters receive through subliminal messages played to them in their sleep.

To capture that effect, Mufson will project images on large screens hung on three sides inside the theater: “The projections are going to be like 30-second to one-minute advertisements full of this kind of messaging. Our access to the technology for the production is going to go a long way toward evoking the world of Huxley—even though Huxley couldn’t have imagined video projections.

“But he’s got this futuristic world, and the quality of that world is very similar to what we’re experiencing right now,” added Mufson. “Part of his critique is that there’s so much opportunity to amuse yourself and constantly be entertained that it leaves no time to think—and really no desire to think.”

If that sounds painfully familiar, Mufson suggests, then you might want to make plans to attend one of the seven performances that begin on September 29.

Mufson and his cast will spend up to four hours rehearsing, five days a week, and their performances run through October 8. 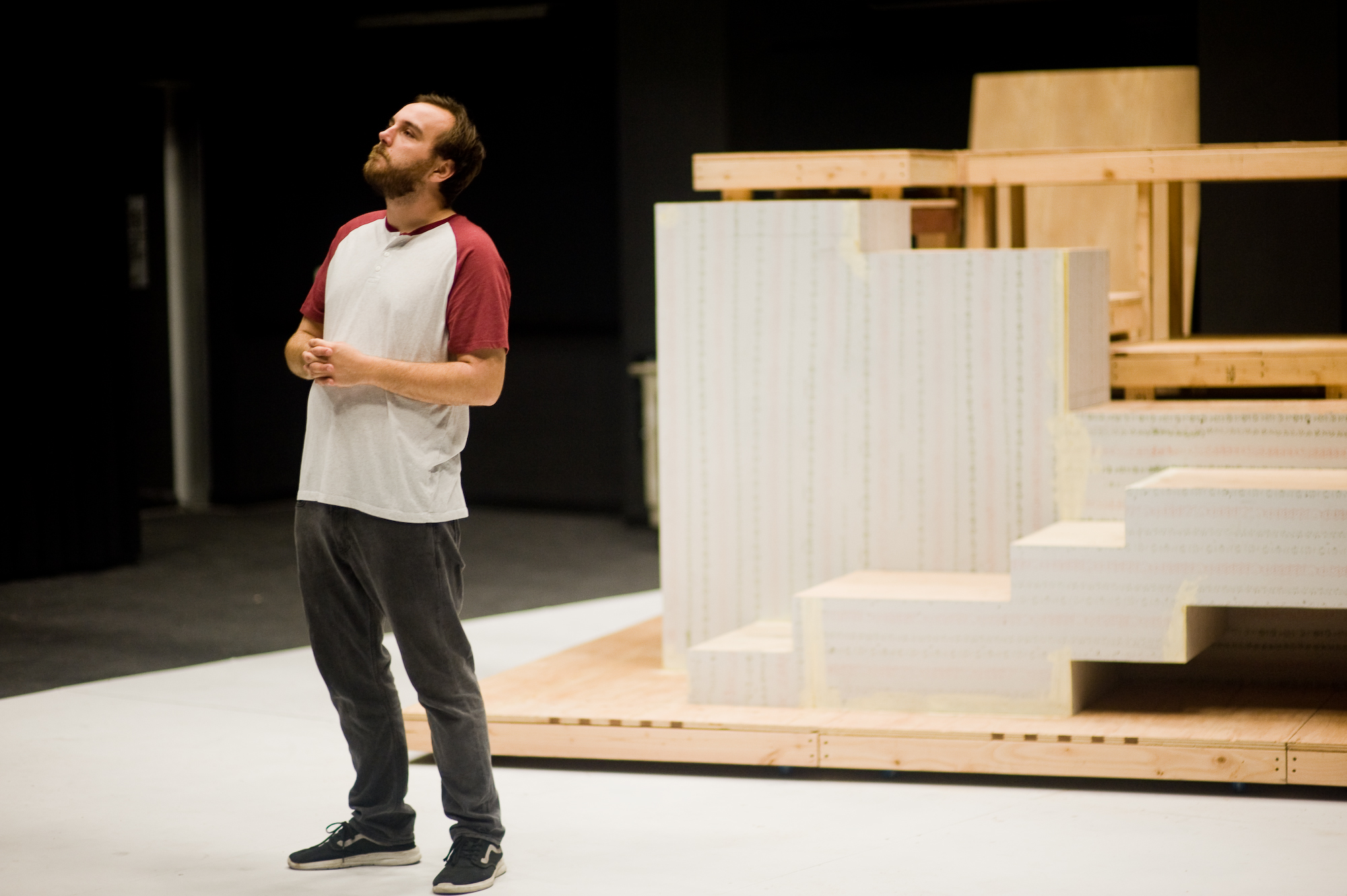 Vying for a role

All of this began with hours of auditions over the last weekend in August. Thirty hopefuls gathered inside a classroom adjacent to the “black box.” Wearing jeans and a “Make art, not war” sweatshirt, Mufson gave some opening remarks in the courtyard, then retreated into the theater to hear a dizzying variety of monologues.

A number of the auditionees had already acted for Mufson at Palomar.

Among the familiar faces was Justin Hoover, 22, a Theater Arts major who delivered his first Shakespeare monologue that night.

Fifteen minutes into auditions, Mufson seemed right at home discussing Shakespeare. He and Hoover parsed the line, “If music be the food of love, play on;/Give me excess of it.”

“With Shakespeare, you can’t guess—not even a single word,” Mufson said, asking Hoover to try again.

“Great choice, doing Shakespeare for this,” he added. (A main character in “Brave New World” is heavily influenced by Shakespeare’s complete works.)

Later, wearing a floral dress and white tennis shoes, with silver hair and a warm smile, Shane Murphy was nervous but also excited. She walked into the theater in front of Mufson, said her lines, and then took his direction and gave it a second try, on the spot. Mufson was impressed.

“For me, what’s powerful about the theater is that it’s one of the few places left in our culture where people come together face to face for a shared experience of what it means to be human,” Mufson said. “We experience it right here. The pain, the laughter, the sorrow, the betrayal—whatever it is. It reminds us of what we all have in common.”