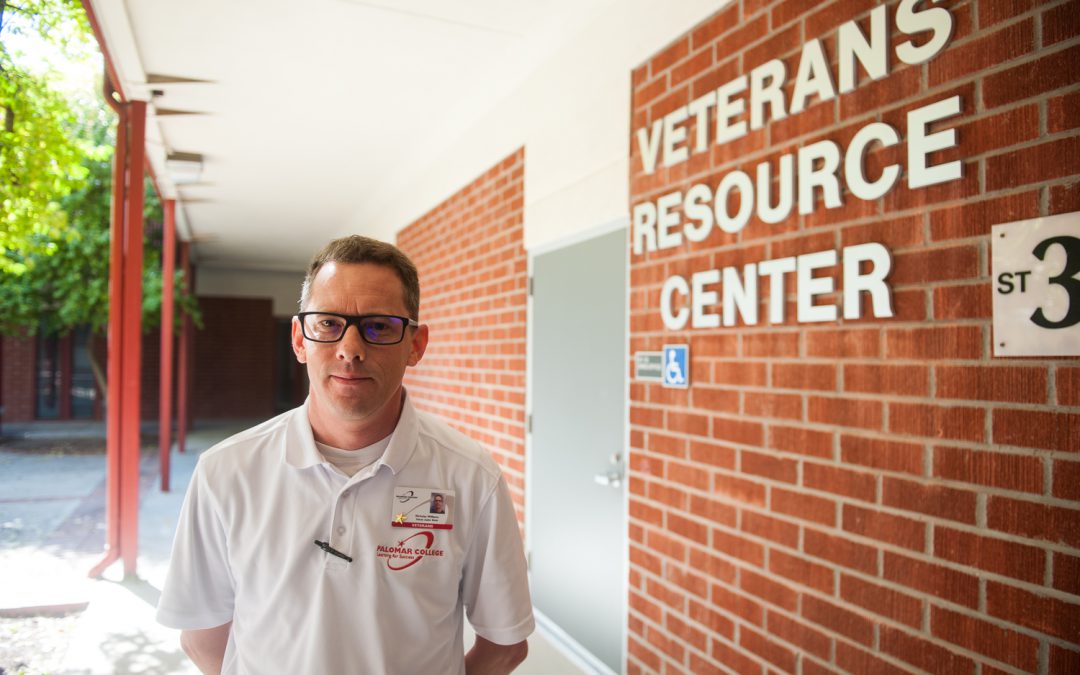 Nicholas Williams arrived in 2014 planning to get in and get out; this May, he’ll graduate with a 3.8 GPA on his way to San Diego State University.

SAN MARCOS — When Nicholas Williams walks across the stage at graduation this May, he will receive his third, fourth and fifth degrees from Palomar College—an especially gratifying milestone for a veteran who began his college career as an academic novice.

Williams, now 39, arrived at Palomar in 2014, and he hadn’t been in school since 1996. He’d spent four years in the Army, and then held various jobs before turning to higher education.

“I drove up to Palomar because they have a real estate program,” he recalled. “The first year, my goal was to do two semesters and go back to work. Then I fell in love with Palomar.”

The only obstacle was a lack of confidence in his ability to make it through college.

Math proved especially challenging for Williams: “I started from the bottom and didn’t do well, but kept trying and trying, and thanks to the Veterans Resource Center and their math tutors, I had the confidence to stick with it,” he said, recalling how he had to retake both Math 50 and Math 56. Now he is taking Calculus.

As a volunteer at the Veterans Resource Center, Williams helps certify students for their Veterans Affairs (VA) benefits and counsels new students through the process of activating their benefits, enrolling in classes, picking a major and working toward their goals.

He recalled learning about the Center for the first time as a new student: “It was a safe area, an area where I could do homework and study.”

He attributes much of his success at Palomar to the support that he received at the Veterans Resource Center.

Jessica Horn, the Veterans Services Supervisor at Palomar, said she’s seen similar stories play out time after time. A veteran arrives unsure of how to navigate a college campus, or perhaps lacking self-confidence, and then finds that they have what it takes to be successful.

“When you leave the military, there’s this huge loss of identity,” said Horn, who is a Marine Corps veteran who served at Camp Pendleton before coming to Palomar. “When you wear that uniform, people know who you are. But when you get out, you take the uniform off, and people can see you, but they can’t see the ‘you’ that you were in the military.

“But when you walk into this center, it’s like getting part of that identity back, because you’re surrounded by men and women who are going through the same thing,” she added. “It’s like a big family. Having this space on campus helps foster the environment and connections that a lot of people lose when they leave the military.”

Williams plans to transfer to San Diego State University (SDSU) this fall to study Business Finance, and he’ll take with him a 3.8 grade-point average from Palomar College. Last year, he earned degrees in Real Estate and General Studies, and this year he’s due for three more—in University Studies, Business and Advertising, Merchandising and Marketing.

“I want to be the CFO of a racing team,” he said. “Like a NASCAR team—but you have to work your way up to NASCAR.”

In the meantime, Williams is passing the torch to his 19-year-old son, Christopher Williams, who will be starting at Palomar in the fall on the Palomar Promise.