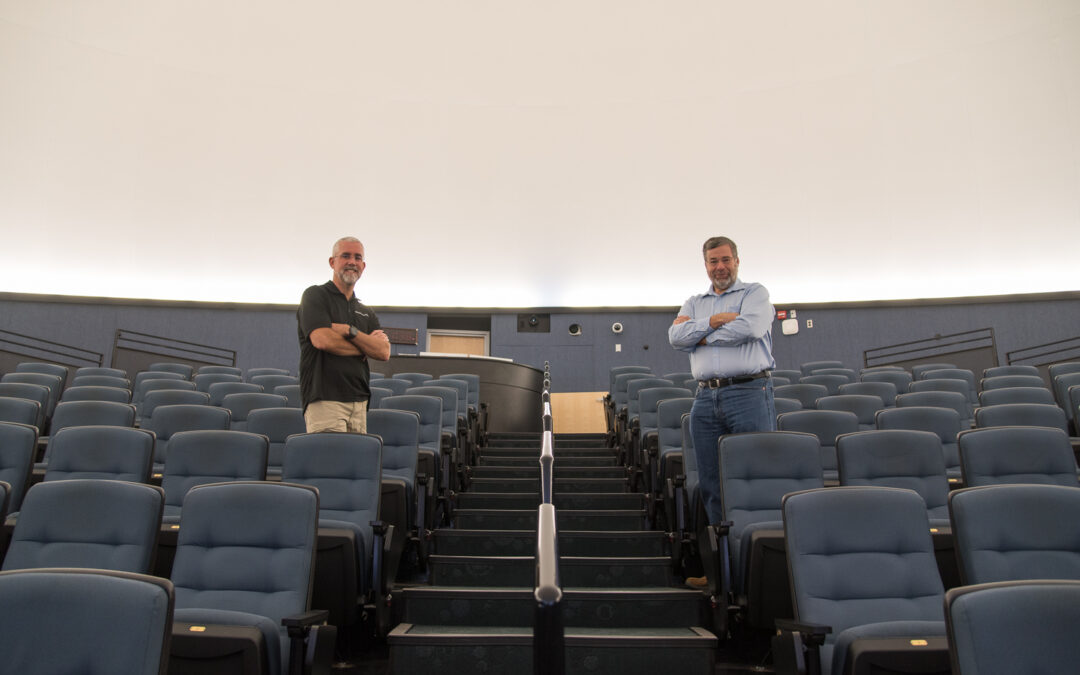 The college’s 142-seat Planetarium is open after two and a half years of temporary closure due to the COVID-19 pandemic and system improvements.

SAN MARCOS — The last time anyone watched a simulation of the night sky inside the Palomar College Planetarium was March 13, 2020, days before the worldwide COVID-19 pandemic arrived in North County.

Astronomy Professor Scott Kardel was in the “console” that night—the term for the control booth in the rear of the theater where the show is produced and narrated by a rotating staff of three Palomar scientists.

Fast forward nearly two years, in January 2022, and the same team was back on campus and preparing to reopen the Planetarium: “A lot of things didn’t work when we turned them back on,” Kardel said.

“Instead of repairing our 10-year-old equipment, we made the decision to just buy all new computers and projection software,” said Astronomy Professor and Planetarium Director Mark Lane. “It used to take eight computers to make the display, now we can do it with two, because the computers have gotten so much better.”

The District was able to use Higher Emergency Education Relief Funds (HEERF) on a one-time basis to replenish lost revenues due to the temporary closure of the planetarium from the COVID-19 pandemic. This allowed the replacement of the legacy system. 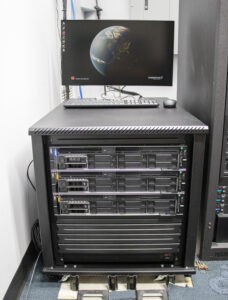 The new presentation system inside the Palomar College Planetarium. Photo by Mark Lane.

“We’re looking forward to serving students and our community once again through the Planetarium, which is an incredible resource both for learning and inspiration,” said Dr. Star Rivera-Lacey, Superintendent/President of Palomar College. “Throughout the years, our middle and elementary school students have enjoyed countless field trips to the planetarium and it will be great to have them back studying astronomy with us.”

In a server room at the very back of the dome-shaped projector screen is a server room—and it’s in that room where the new system resides: Three new computers loaded with the latest version of the industry-standard Digistar software to run the complex projections on a half-spherical, overhead screen.

The two projectors that cast the image—now sharper and more detailed than ever, thanks to the upgrades—were still fully functional when they revisited the Planetarium after COVID, Lane said.

“There are a lot of things the public isn’t going to notice—especially if they haven’t been here in a couple of years—that we noticed right away after the upgrades were finished,” he said. “In our 7 o’clock show, we’re trying to incorporate new things to show what we’re now capable of. We don’t want to give people the same show we were giving them in the past.”

Kardel added: “It’s got the same name, the constellations are still the same, but how you tell that story, and what you show as you do it—that’s what’s going to be different.”

Starting Friday, September 16, 2022, the Planetarium will once again host two shows every Friday: 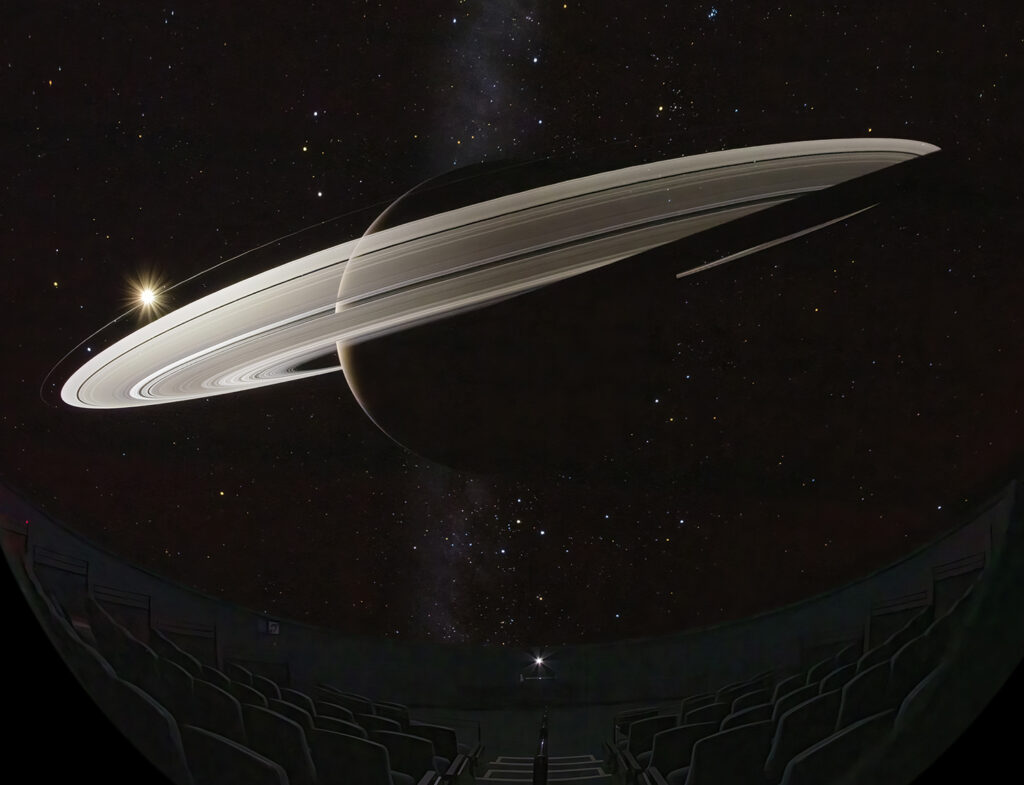 A view of Saturn projected inside the Palomar College Planetarium. Photo by Mark Lane.

When the weather cooperates, Lane said, Palomar College staff also set up telescopes on the patio in front of the Planetarium for free viewing. Parking is available directly across from the facility off of Comet Circle.

Tickets are sold separately for each of the two weekly shows, and are available by visiting https://www.palomar.edu/planetarium/public-shows/ 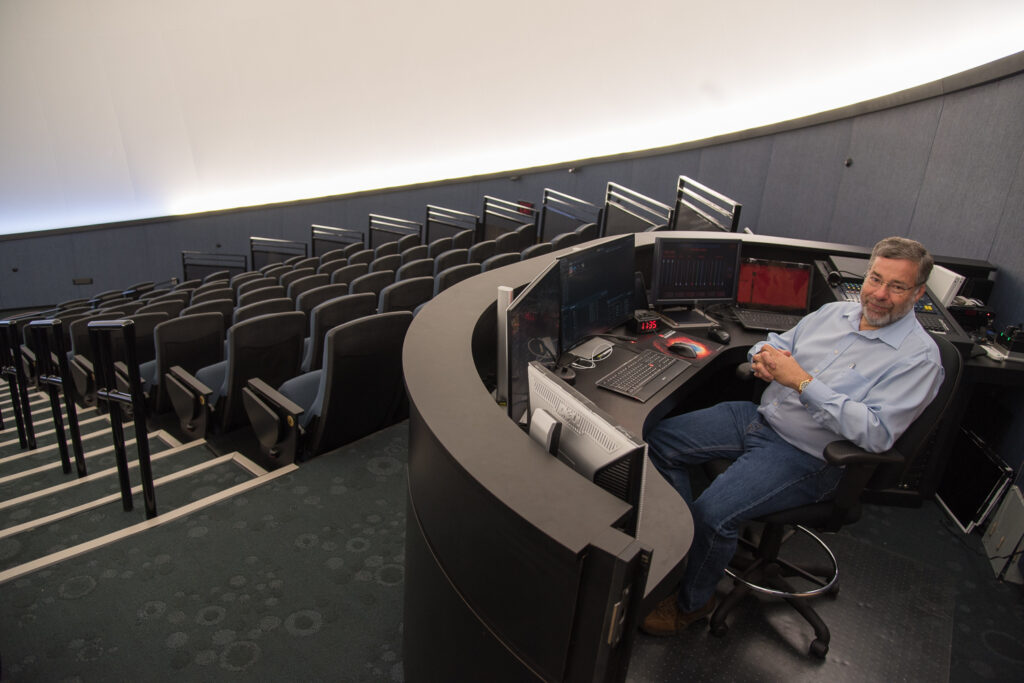 Astronomy Professor Scott Kardel in the console at the Palomar College Planetarium.