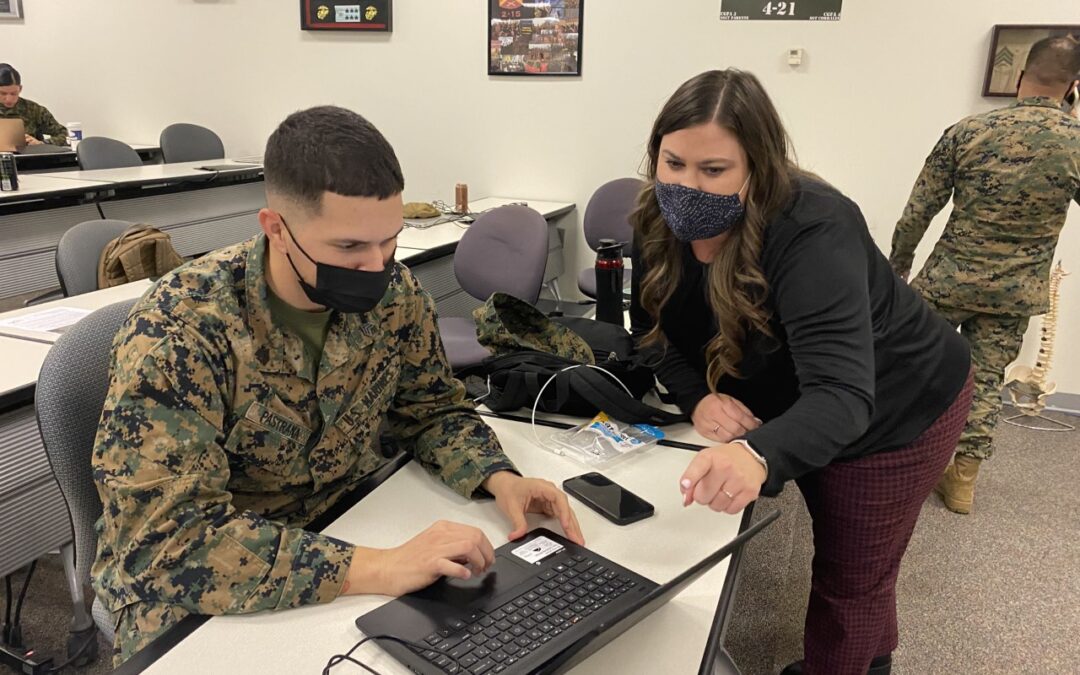 Launched in 2020 at Camp Pendleton and Twentynine Palms, the partnership with the U.S. Marine Corps will extend the opportunity to earn college credit to leaders in training on the East Coast.

SAN MARCOS — A fast-growing program that Palomar College started in 2020 has expanded to provide college credit for prior learning to Marine Corps leaders in training at to two bases on the East Coast, following a visit by four of Palomar’s staff to Marine Corps Base Quantico in Virginia.

The Military Leadership (MIL) program was launched in partnership with the College of Enlisted Military Education, Marine Corps University and initially served active-duty Marines at Camp Pendleton and Twentynine Palms.

With the recent meeting in Virginia, the program has now grown to include Quantico and Camp Lejeune, and is also projected to expand to the USMC Sergeant Schools in Hawaii and Japan, where leaders have expressed interest. As an apprenticeship program, the MIL initiative is provided at no cost to the active-duty Marines who enroll.

Through credit for prior learning, marines who have already completed Sergeant School training are now eligible to take advantage of this opportunity.

“We’ve been so successful at Camp Pendleton, the leadership at Quantico reached out to us and said, ‘When can you come here and do this with us?’” said Nichol Roe, Associate Dean of Workforce Development and Extended Studies at Palomar.

Roe and three others from Palomar were invited to a leadership summit in Quantico on February 8, where the directors of all six USMC Sergeant Schools around the world were gathered.

Roe said they enrolled new students, met and presented to the Sergeant School leaders, and made plans to expand what has quickly become a valuable partnership.

As a result, nearly 200 Marines, from Sergeant School locations on four bases—now including Quantico and Camp Lejeune—are enrolled in the program and on track to be eligible for graduation with a Certificate of Achievement in Military Leadership this spring.

“This team has moved us from eight graduates to almost 200 in a year,” said Jack Kahn, Palomar’s Assistant Superintendent/Vice President of Instruction, who also made the trip to Quantico. “No other program has grown this much in one year—it’s a huge accomplishment. But that number could be even bigger, if we are able to institutionalize this unique opportunity.

“Our desire, as we go forward, is to institutionalize the MIL program and demonstrate solidarity between the Marine Corps and Palomar College,” he said.

Another member of the Palomar delegation to Quantico, Associate Professor Candace Rose, said the expansion has come at the request of the Marine Corps: “They’re the ones putting the word out and saying, ‘We need to make this happen,’” said Rose. “There were some skeptics, but now that the results are in, they’re seeing the opportunity.”

Rose also credited the program’s success in large part to the eight part-time faculty, “most of whom are active-duty Marines. We could not do this without them. And we should have 16 by the end of the year who are going through Palomar’s training and becoming part of our campus culture.”

Kahn said that the program has the flexibility to expand beyond Palomar’s district borders because it is an apprenticeship program, which is not as restrictive as traditional for-credit offerings.

The program is designed to articulate the coursework of Marines in Sergeant School into 12 units of Palomar credit, followed by 2,000 on-the-job training hours once they return to their Military Occupation Specialty (MOS). Another six units of credit is awarded for the on-the-job training hours, resulting in a Certificate of Achievement in Military Leadership from Palomar College.

Participating Marines may take the further step of completing Palomar’s general education requirements to earn their Associate of Science degree in Military Leadership.

Tory Haynes, the MIL Project Director at Palomar and fourth member of the delegation to Quantico, said that the goal is to eventually have a Palomar College staff member at each of the Sergeant Schools, which are provided through the Marine Corps University.

“And it’s not just Sergeant School,” said Haynes. “There are opportunities with the other academies that are offered at these locations, which can offer a wider range to active-duty service members.”

The first class of eight graduates from the program earned their Palomar College certificates during a ceremony on campus held Friday, September 10, 2021.