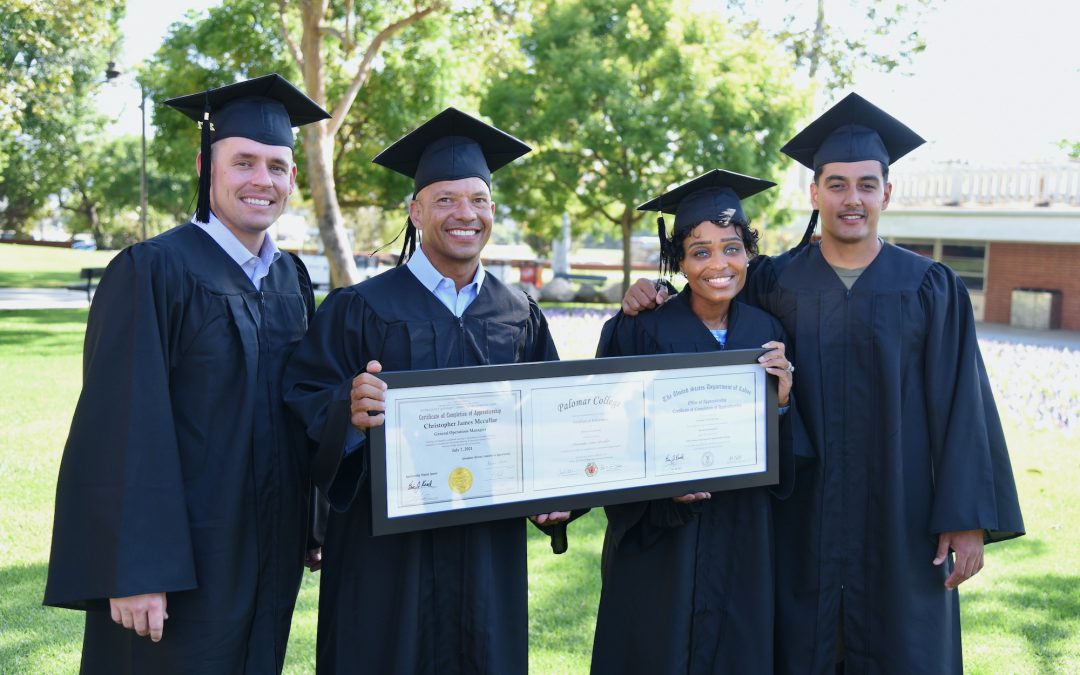 SAN MARCOS — The first graduates of Palomar College’s new Military Leadership (MIL) Apprenticeship program at Camp Pendleton were honored during a ceremony on the main campus in San Marcos on Friday, September 10, 2021.

A total of eight active-duty Marines were awarded program certificates, four of whom attended the intimate ceremony that was held on the lawn beside the campus veterans’ memorial.

“We can’t wait to see what’s next in your future,” said Superintendent/President Dr. Star Rivera-Lacey. “This is a culmination of your hard work, and I hope you take this moment in the sun to celebrate. I couldn’t be more proud that you are joining Palomar College’s alumni.”

The program is designed to articulate the coursework of Marines in Sergeant School into 12 units of Palomar credit, followed by 2,000 on-the-job training hours once they return to their Military Occupation Specialty (MOS). Another six units of credit is awarded for the on-the-job training hours, resulting in a Certificate of Achievement in Military Leadership from Palomar College.

If participants choose to fulfill the general education requirements, they will also be eligible for an Associate of Science in Military Leadership.

On Friday, the Marines who finished the program also received a Certificate of Completion from the California Division of Apprenticeship Standards.

“Thank you to all of you who participated in the program this year,” said Dr. Jack Kahn, Palomar’s Assistant Superintendent/ Vice President of Instruction, “We hope this gives you some ideas for your next steps, and if those next steps include staying at Palomar College, we’re here for you—to be a bridge to your future success.”

The Marines who earned their certificate during the inaugural cohort were:

Several people participated in the ceremony remotely via live Zoom feed, including James Cohn, Dean of Academics at the College of Enlisted Education at Marine Corps University

“You are going to be a beacon for other Marines,” Cohn said during the ceremony. “You’ve set the example, you’ve shown that it can be done. I can’t wait to see how you implement what you’ve learned at the Academy.”