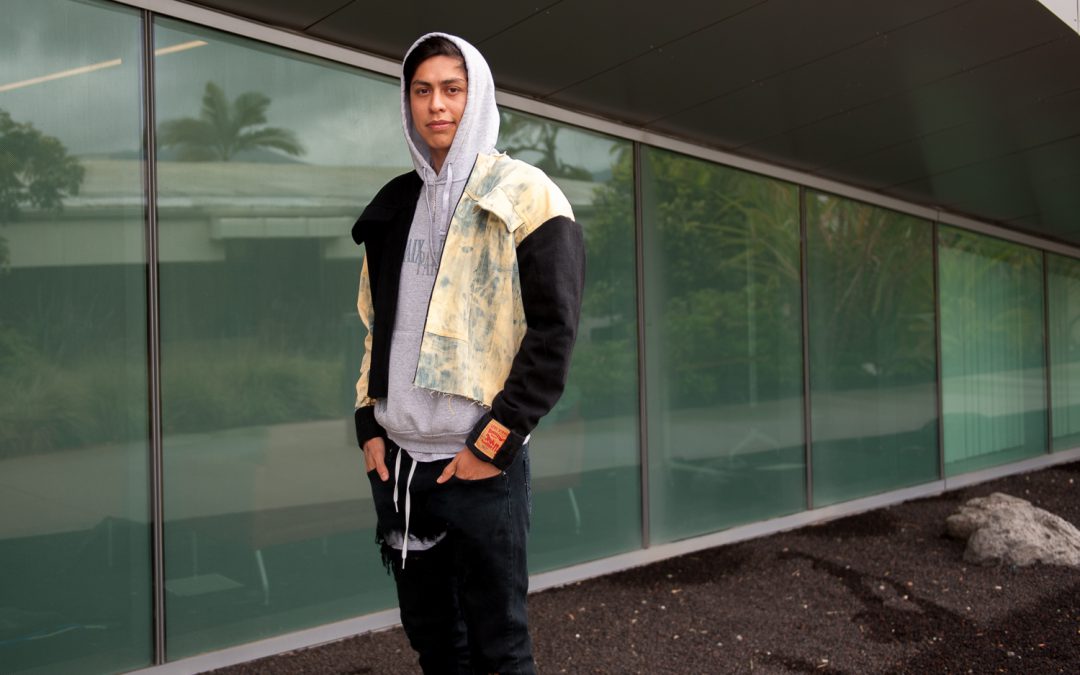 Genesis Alcantar, graduating this month, has a collection in the annual MODA show on Friday, May 11. His unlikely path to Palomar College began with a second hand sewing machine and a chance infatuation with a designer jacket.

SAN MARCOS — It started with a jacket. Genesis Alcantar was scrolling through Instagram one day and saw a jacket by a Japanese clothing company, Bape, that retailed for $400.

The fateful jacket led to a second hand sewing machine that Alcantar bought in a thrift shop without any of the usual accessories or instructions. It took him an hour just to figure out how to thread the thing. But he was on his way.

Alcantar’s next stop: YouTube. He spent hours learning how to sew a straight line and other basic skills. “No one in my home knew how to sew or make clothes,” and his mother got a kick out of his new obsession, he recalled.

But the hours on YouTube were flying by and he was hooked. Maybe he was meant for this.

When he started looking into fashion programs, he quickly discovered Palomar’s Fashion Merchandising & Design program and enrolled. His initial goal was to finish as fast as he could, but he says he found a community, a second family, at Palomar.

“You get that one-on-one teaching that I wouldn’t have gotten at a bigger school—I would have just been another student coming in and out, but here you actually get the attention and you learn a lot, especially if you’re asking the right questions,” he said.

Alcantar will graduate on May 25, earning his Certificate of Achievement in Fashion Design.

But first, his big moment. Along with nine other student designers, Alcantar will send a collection of his own designs down the runway on Friday, May 11 in the annual Palomar College MODA Fashion Show & Career Expo.

“Our designers have really put their best foot forward,” said Rita Campo Griggs, who teaches Fashion Merchandising and is coordinating the show. “The construction is immaculate.”

Griggs said the show will feature 10 designers and almost 200 looks. For the most involved projects, students like Alcantar created “collections” that had to be made 100 percent from scratch.

“It’s a full two years of work, because they have to start from putting the illustrations together and learning how to make the patterns,” she said. “Each step gets them a little bit closer. We have them start thinking about what their collection is going to be, so they have that vision from the very beginning.”

Griggs said she saw the makings of success in Alcantar: “I see him as the future. After all of these years in the industry, you can spot students who are going to succeed, and he has a really bright future ahead of him. He also works really hard in class.”

Alcantar said he learned not only design and technical skills at Palomar, but also discovered himself as an artist and a maker.

“At Palomar, I figured out what type of designer I am,” said Alcantar. “I’m really into streetwear and high couture clothes. I love making suits, but at the same time, I could wear ripped jeans and a T-shirt. I love where fashion’s going, bringing street into high-end clothing.”

In keeping with that vision, Alcantar’s dream job would be to work for Saint Laurent, but to start he’s launching a fashion brand with classmate Nay Cavala called Paix, French for “peace.” Alcantar and Cavala have a fashion show scheduled this summer at Midnight Brewery and Alcantar said he feels confident enough in his work to start selling clothes this summer.

“I wanted to wait until things were looking good and complete to start selling them. Now, with the new stuff I’m making? You would pay for that,” he said with a grin. “Palomar gave me all the answers I needed.”

The annual MODA Fashion Show & Career Expo is scheduled for Friday, May 11 at 7 p.m. at the California Center for the Arts in Escondido. Tickets cost $15 in advance or $20 at the door.

Among the students who have collections in the show, designer Shun Oyama made a line of kimonos and Vicente Guzman sublimated his own artwork onto the fabric he used to make his garments. The other student designers include:

Click here for more information about MODA. To purchase tickets, click here to visit the California Center for the Arts Ticket Office.