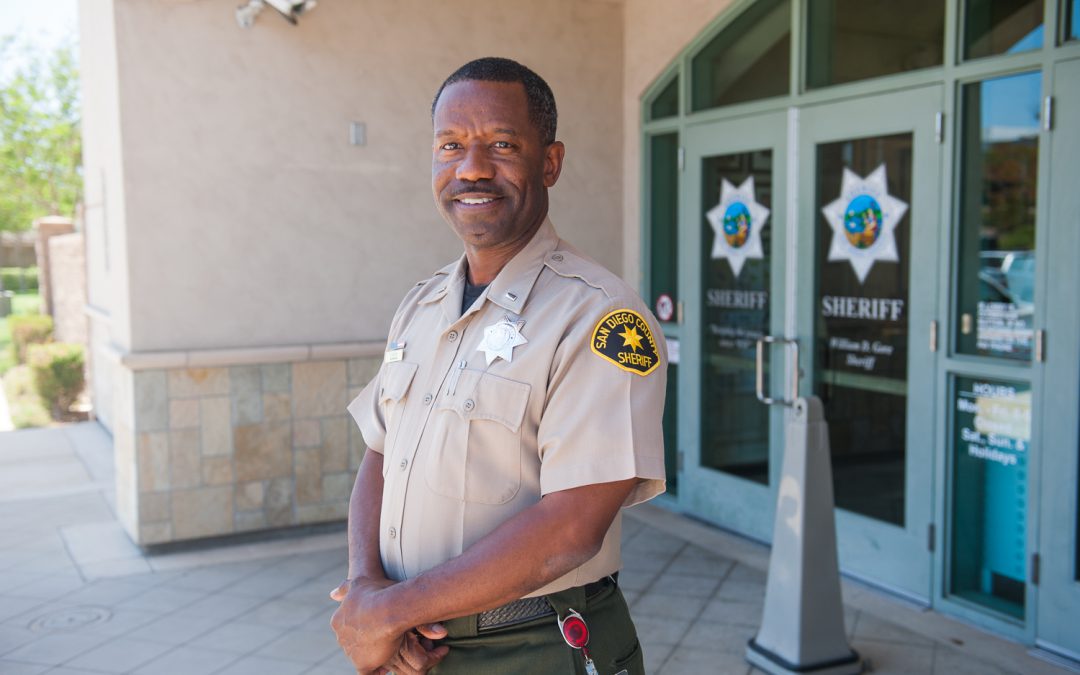 SAN MARCOS — As a Sheriff’s deputy in his late 20s, Eddie Brock had been on the job for a year when he decided to go back to school and enrolled at Palomar College.

Brock recalls his first months in the department, when he started to notice that the highest-ranked officers thought differently and asked questions he found unusual. He wanted to know, what was the difference he saw in them?

“I asked the question and they said, ‘If you want to move up in this department, you have to go to school and educate yourself,’” Brock recalled. “The more you know, the better you can do your job.”

Brock’s path to law enforcement began with a dare in the early 1990s: At the time, with five years in the Marine Corps, a group of Marines dared each other to test for a job at the Los Angeles Police Department, and Brock said he was the only one to follow through. The test went well, and what had been a whim became his lifelong calling when the San Diego County Sheriff’s Department hired him in July 1992.

His path up through the ranks of the Sheriff’s Department, he said, has frequently been through the classroom.

As a young deputy, Brock made a habit of reading the biographies of police chiefs online: “The running theme among police managers was education—they had master’s degrees, doctoral degrees, law degrees. And it made them better police officers. One person was an English major, one guy taught philosophy at two different universities, one guy was a Catholic priest and then became a police officer.”

There was more to enforcing the law than jumping fences and making arrests, he began to see. Leadership was largely a matter of education—and this insight was reinforced in his conversations with higher-ups.

Twenty-six years after his first day in a deputy’s uniform, Brock—who went into law enforcement with only a high school diploma and his experience as a Marine—now holds an associate degree from Palomar, a bachelor’s from National University and a master’s from the University of San Diego.

Now he preaches the benefits of education to the officers under his charge.

“Deputies come into my office and say, ‘Lieutenant, how did you get here?’ They want that guidance. And I tell them, ‘If you’re serious about this, you’re going to be serious about education.’ Education is going to change you for the better,” Brock said during a recent interview at the station.

“Community college is the way to go,” he added. “It’s cheaper, the standards are the same, and the schedule is flexible enough to accommodate a career.”

At the Sheriff’s Department, Brock has had a highly varied career: he’s worked the jails, manned a patrol car, ridden a motorcycle on traffic duty, trained hundreds of deputies, and apprehended dangerous criminals as a member of the SWAT team.

Now, as an administrative leader in the San Marcos patrol station, Brock speaks fondly of the young deputies he mentors—men and women who remind him of the Eddie Brock who first wore the badge as a 27-year-old veteran from Camp Pendleton.

“Law enforcement draws from the very community that it polices, and we need pillars of the community, like Palomar,” Brock said. “A lot of our leaders are going to come from that campus.”

Brock spoke highly of the Department’s relationship with the college and its Police Department, and shared his personal affinity for the campus where he began his journey in higher education 25 years ago.

“Palomar is a staple in North County,” he said. “It has grown in stature and importance, and in the depth and wealth of its education.

“Palomar is just getting better and better,” he added.