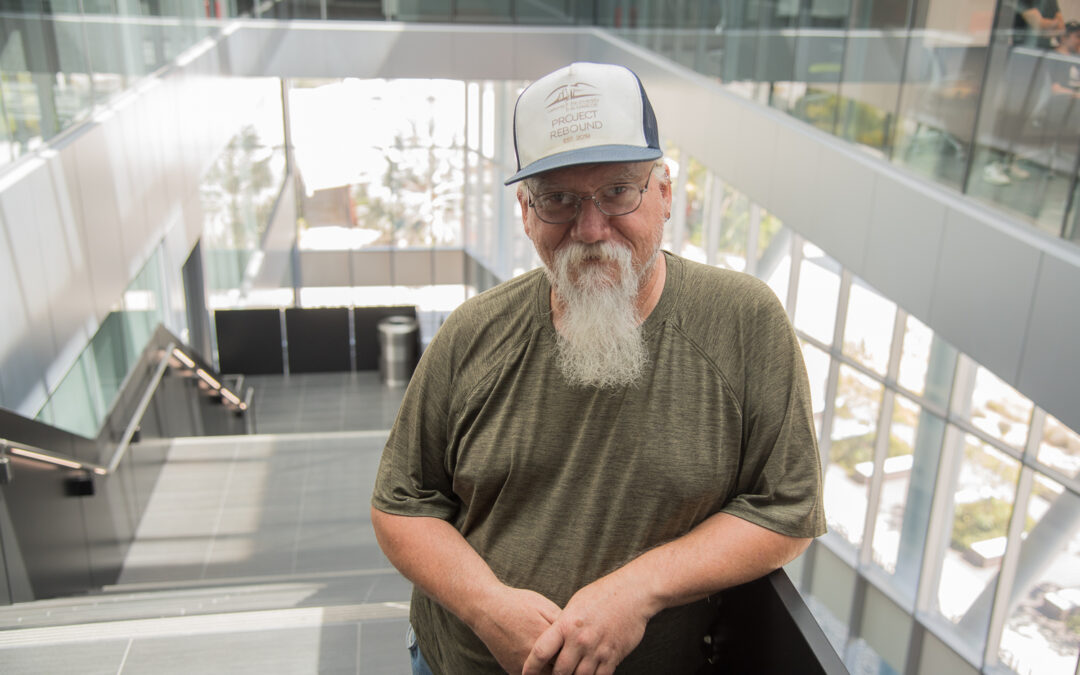 Lawrence Morris is known among the tight-knit community of formerly-incarcerated students as a godfather, of sorts. Now pursuing his M.A. at Cal State San Marcos, he recently sat down with Palomar News to tell his story.

SAN MARCOS — Every morning for several years, Lawrence Morris took his place in the Student Union at Palomar College with hot coffee and a listening ear.

As the hours went by, students with a similar past—men and women who had spent time in prison or jail—would sit down and do something not often witnessed among the formerly incarcerated. They would talk.

“I had a regular table in the Student Union—I was here every morning at 7 o’clock when it opened,” he recalled. “Two or three times a week, I had donuts; I had coffee every day. Any student who wanted to sit down with me, I was here. I provided that security for them.

“So I was adopted as their surrogate grandpa—I think it has something to do with the beard, and also with being old and able to listen,” he added. “These students could share what was going on in their lives and I’m not trying to save them or fix them—they know this—I’m just there to listen, and I’ve got donuts and coffee.”

Morris is friendly and talkative, but also reserved in a way that is unique to the formerly incarcerated. After more than four years of intensive involvement with students who have been impacted by the justice system, he knows where the pressure points are.

When he tells that story to a fresh group of Transitions students, it goes something like this:

“‘My name is Lawrence, I’m a naval submarine veteran, I spent 29 years incarcerated on a life term, I was released on parole in 2016 and discharged in 2021. I have two associate degrees and a certificate from Palomar College and’—now I can add—‘I earned my bachelor’s degree in Sociology from Cal State San Marcos, and I’m a candidate in the Master of Sociological Practices program at Cal State. And, oh yeah, I’ve got a nice beard.’ And they will say, ‘OK, this old guy is one of us.’”

A Long Road Out West

Morris was the first Transitions student to graduate at Palomar College. But he arrived with a lifetime of experience under his belt—including as a student in a variety of college programs during his incarceration.

The Transitions program at Palomar—soon to be renamed Rising Scholars—helps previously incarcerated individuals adjust to a college campus and successfully begin or resume their higher education. It also serves currently incarcerated students in the Vista Detention Facility, and hosts a summer session every year that serves as an orientation to the program and includes tutoring, weekly team building activities, guest speakers, two for-credit classes, and various other forms of support.

Originally from Texas, Morris spent 10 years in the Navy, became a highly skilled submarine technician with nine occupational specialties—and a handful of Cold War deployments he still can’t discuss—and wound up stationed in San Diego in 1986. The following year, he was arrested and sentenced to life in prison.

Twenty-nine years later, on May 4, 2016, he was released on parole, boarded a train for San Diego, and spent his first night on the outside sleeping on a bench in Santa Fe Station downtown.

“My train was two and a half hours late, so nobody was there to pick me up, and of course there were no pay phones, and nothing was open,” he recalled. “I couldn’t even rent a room because I had no identification. I had a debit card with $200 on it and didn’t know how to use it.”

A few months later, he was living at the Amity Foundation’s Vista Ranch when he met Martin Leyva, who founded the first Transitions programs in the region at MiraCosta and Palomar College.

“Martin was looking for a life-term formerly incarcerated person to speak following a screening of a documentary, ‘Life After Life,’” Morris recalled.

He shared his story with the audience that night, and soon he was with two dozen other formerly incarcerated and system-impacted students in a room at Palomar College—the inaugural cohort of Transitions students in 2018.

From Imposter to OG

“I found my people,” he said, but being on campus after spending most of his adult life in prison was no walk in the park.

“Imposter Syndrome? That was me. Nobody looked like me on campus—here’s this old guy with a walking stick, a backpack with holes in it, and a beard. My first class was American Sign Language, and nobody in the class—including the professor—had even been born when I went to prison. And the technology? I had no clue. But I embraced the technology, because I had to.”

Morris graduated from Palomar in 2019 with two associate degrees and a certificate in College Studies. He went on to earn his bachelor’s degree in Sociology from Cal State San Marcos (CSUSM) in May 2022, and is now pursuing his master’s degree.

Morris has had a hand in every summer Transitions cohort that has convened at Palomar College. He also serves with Project Rebound, a support and services program for justice-impacted individuals at CSUSM.

He is revered among the other Transitions students for his generosity, wisdom and dedication. And he says no matter what else comes in life, he’s going to keep serving his fellow students.

“I want to teach. I want to travel. I want to go do things. But I really want to stay connected to these programs that support formerly incarcerated students in some way,” he said.

“It’s important to have the OG’s here to support the next generation,” he said, using the acronym for “original gangster.” “At Project Rebound at CSUSM, we stole that and flipped it. OG now stands for ‘Opportunity Giver.’ I’ve been given opportunities. I believe it’s part of my responsibility to make the same opportunities available for somebody else.”