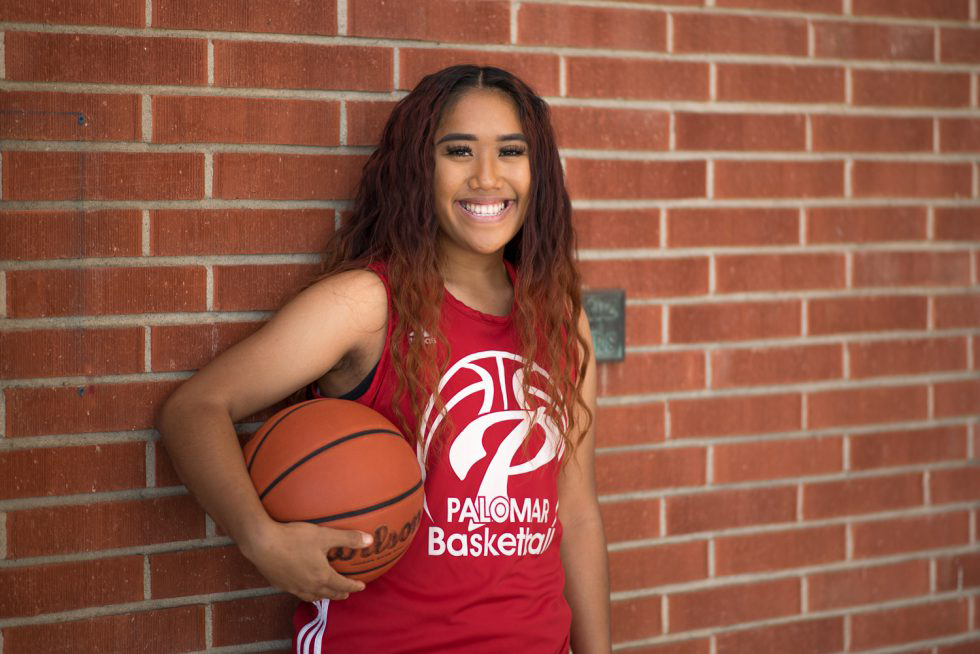 Julie Saelee, 20, had a rough time back in high school, but has grown over time and is now thriving at Palomar.

Saelee is the starting guard for the Palomar women’s basketball team. She’s from Elk Grove, Calif., south of Sacramento.

“Growing up in Elk Grove was pretty difficult at first,” she said over email. “I wasn’t liked at my high school, I had no friends, it was just me and my twin sister.”

To help her through high school, she played basketball, volleyball, and ran track to help get rid of the distractions.

Saelee thinks that her best personality trait is being able to overcome adversity and obstacles. Over email, Coach Leigh Marshall said, “Julie has dealt with adversity throughout her life and she has decided to never be a victim, never feel sorry for herself but to use this adversity to come out on top. And she has done just that. She is inspiring.”

Saelee’s major is University Studies of Mathematics and Science. She wants to become either an RN or a Labor and Delivery Nurse.

In her free time, she likes shopping, hanging out with close friends, sleeping and playing with her puppies.

She started playing basketball in fifth grade but wasn’t officially on a team until sixth grade.

She has enjoyed playing at Palomar and has especially loved creating a special bond with her teammates, who she calls her sisters.

The way Saelee plays can be compared to players at the next level of play. “I model many high skilled and level players,” she said, “I used to watch Kobe Clinic Series on YouTube before games to get me amped up, I also watched Stephen Curry and Kyrie Irving.”

She models her play style around her teammates when on the court together.

Her study of other players showed when she broke the program’s record for most three’s in a game at nine, and when earning a spot on the PCAC all-second team.

Marshall had a lot of positive things to say about Saelee. “Julie has a big role. She is a knock down shooter but also a tough defender, willing to dive on the floor and mix it up, tries to rebound even at her smaller size and is an energy giver.”

Marshall said that Saelee has made a big impact since being on the team. From coming in everyday with a consistent mood, to having the urge to learn and get better everyday, to putting the team’s needs first.

Now that the team has made the playoffs, it’s time to get to business.

“It’s really rewarding to make the playoffs, but it’s also time to get busy,” Saelee said. “I am very excited to share these special moments with my sisters, overall I am ecstatic.”

Her postseason goal is to win state.

After Palomar, she plans to continue playing by walking on to a team, but isn’t sure where.

“Basketball is something special for me, I don’t just want to give it up,” she said. “If I can continue I will.”