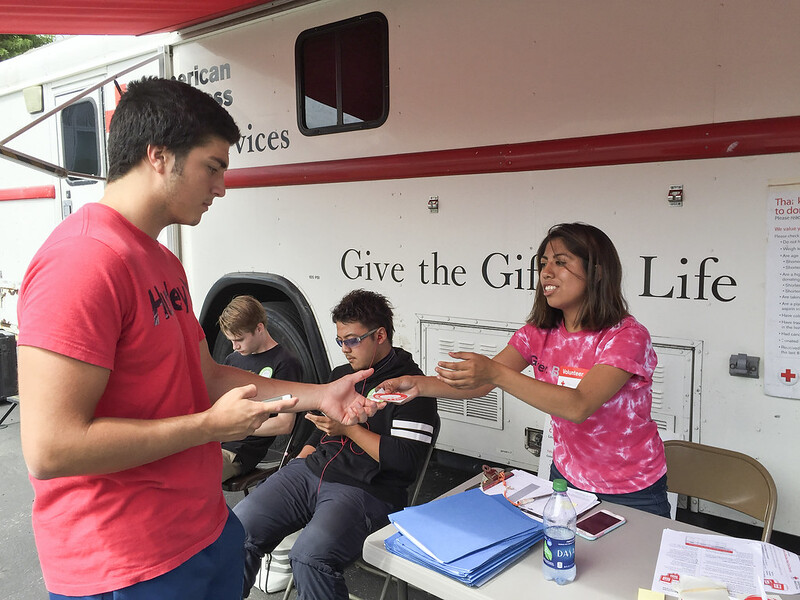 The American Red Cross (ARC) invites students every semester to donate blood, unless you’re a sexually active member of the homosexual community because of an outdated policy imposed by the FDA.

Between September 17th to the 21st the American Red Cross was on campus taking blood donations from anyone willing to donate a pint.

However, according to the ARC website, they will refuse blood from sexually active gay men willing to donate.

Following FDA recommendation, the ARC will “Defer for 12 months from the most recent sexual contact, a man who has had sex with another man during the past 12 months,” even though they are desperate for blood.

After speaking to volunteers working at the sign-up-table on campus, they reaffirmed this repugnant discriminatory sentiment.

Daniel Preciado a volunteer at the blood drive said, “We’re always in need of blood. Any donation helps and we’re trying to get as many people here as possible.” Preciado continued, “The ARC will prevent [gay men] from [donating blood].”

Another volunteer Rachel Alazar said, “Unfortunately in the 80’s the AIDs crisis ended up increasing and right now, [the ARC] wants to be cautious about that.”

According to the CDC (Center for Disease Control) in a 2015 study, Homosexuals make up 67% of all HIV cases. This figure, however, instills an irrational fear that HIV is a huge epidemic and that a large amount of gay people have it.

In reality New HIV infections have dropped 18 percent in the past six years according to HIV.gov and the rate is continuing to decrease.

After the Aids crisis was an actual epidemic in the 1980’s, the FDA deferral was written in 1992 when the most cases were being reported. Since then, the rate has dropped significantly.

This policy imposed on caring blood donors needs to be reevaluated considering that most gay people in the United States do not have HIV or AIDs.

As a matter of fact, there is a drug available to those who frequent barebacking sessions with multiple partners called Pre-Exposure Prophylaxis (PrEP).

According to the CDC, “Daily PrEP reduces the risk of getting HIV from sex by more than 90%.”

This drug will, in fact, reduce the HIV rate significantly in the U.S. making the current policies the FDA imposes and the ARC upholds totally outdated.

33% of all HIV cases come from heterosexuals, yet the Red Cross allows sexually active heterosexuals to give blood.

One can surmise that the real tea is heterosexuals as opposed to homosexuals have higher rates of STDs per capita seeing as gay people only make up about 11 percent of the total population according to the National Survey of Family Growth.

This is a blatant disregard of statistical evidence and perpetrates discrimination based on sexual orientation.

Discrimination on campus will not be tolerated and students should take a stand. The Red Cross needs our blood, and beggars can’t be choosers.

By upholding these policies the state is upholding discrimination based on sexuality and because the campus is allowing the blood drive to happen on school property so are they.