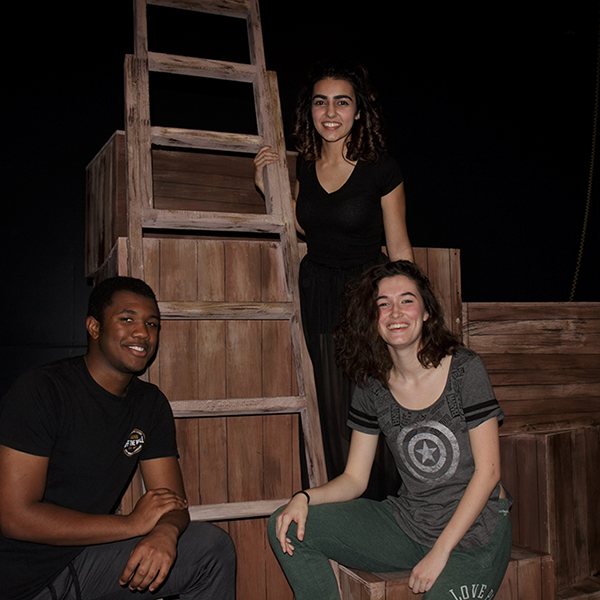 “Peter and the Starcatcher” an engaging fairytale

Fairytales come to life on the set of “Peter and the Starcatcher.”

Coming into the Peter and the Starcatcher fan culture late, it was hard to know where to set the bar for expectations for what the play would be like. But nothing could compare to the song and dance of the actors, the way they mimed ocean waves and made their viewers believe that the flailing puppet on a fish pole like contraption was actually a flying cat.

Before the show, it was a lucky draw to be able to talk to the director of the play, Michael Mufson. He had on a black hooded sweatshirt, and a relaxed demeanor about him, even though the show was beginning in twenty minutes. He described his forte as weighing among a “social justice” kind of vibe; “a punch in the stomach kind of thing”. Peter and the Starcatcher was a departure for him in its display of less politics, more story.

The main synopsis of the play had to do with this mystical “star stuff” energy. It made a door light up before the eyes of the audience and transformed a group of fish into funky, dancing mermaids. As Molly Aster, the female protagonist of the story, tried to successfully deliver the star stuff to a mountain to be disposed of, her plans were repeatedly foiled by pirates, led by a poetry reciting, sword wielding Black Stache.

When asked about her depiction of Black Stache, actress Viviana McCormick was quick to say that she enjoyed the duality of “very feminine” and “cutthroat behavior” that defined her character. Stache would one moment by glaring at his subordinates, threatening to make their lives miserable, and in the next draw of breath be waited upon by a certain nail buffing assistant.

The show swung from moments of quiet courage to an in your face explosion of performance. In a particularly fine grasp of acting, Isabele Oraha, the actress behind Molly Aster, walked past a long row of boys, tsking in a British accent. She would tip one of the batons they were carrying and a scene would erupt, maybe somebody lying, yelling, on the stage floor or a sudden shout of laughter. Then, as quickly as she swayed the baton back to a standing order, the boys would be back in their line, faces subdued.

This ability of the ensemble to mesh into one abominable force of contorted expressions and an energy spoke of Mufson’s desire for a show of extreme physicality within the show. His idea was for his actors to be performing a “score” from start to finish. The moments of tears and excited whooping were simply tempos in an acted out song. “The theater is about how we connect as human beings,” were Mufson’s words.

After the show, catching up with Isabele Oraha, she paused at a question about what she wanted the audience to take away from the play. “I want them to feel like they’re children,” she said. “sitting criss-cross applesauce on a mat, and we’re telling them a story.” If the rapt attention of the audience was anything to go by, she got her wish.