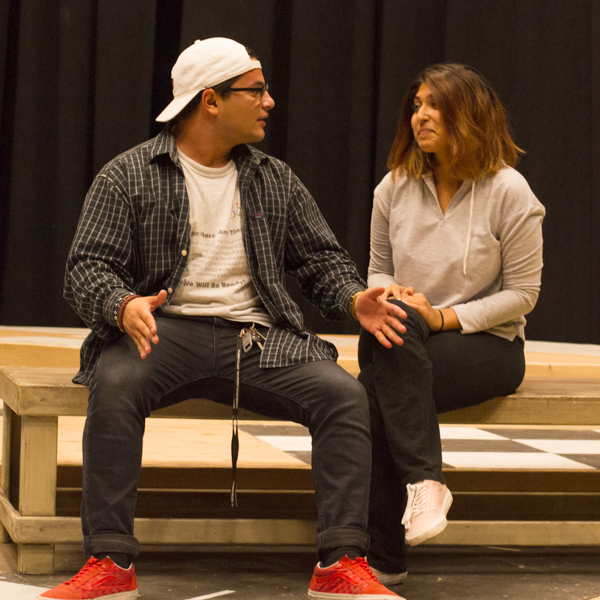 Set in a small French town, it seems as though everyone is transforming into a Rhinoceros.

A play full of abstract and funny allegories, Eugene Ionesco’s “Rhinoceros” mimics the struggle of finding oneself in a mist of chaos, when many characters begin to fall under the power of the metamorphosing rhinoceroses. The play exposes the limitations of logic, morality and conformity.

The play will run at Palomar’s Studio Theatre starting Dec. 1.

The phrase ‘everybody’s doing it!’ isn’t far-fetched in describing the chaos that’s about to break out on stage.

Part of the fun between the different dynamics on stage is the interaction between the two leads, Berenger and Jean. Dori Sanchis, who plays Jean, explained how she first read the play in English, and then went back and read the original French version. She loved the play, and felt reading the play both ways would enable her to really understand it. “I felt so much closer,” Sanchis said, to the characters and to the author.

Omar Fox, who plays the character Berenger, explained his process of getting into character for a show that has so much depth.

“I believe that character can be developed through the physical life, through a physical score,” Fox said, recounting his time sitting with the director, John Polak, to determine how he would play his character.

Berenger is a character that feels alienated, somewhat out of place from everyone else, yet apathetic and unwilling to commit to daily life.

“He’s kind of lazy, not well put together,” Fox added about his character. On auditioning for the play, it was something he wanted to pursue. “This was to chase the feeling of something new,” and he added his respect for the fellow cast members. “We have a really good cast, 10 phenomenal actors and actresses who are all committed to making this happen.”

Fox is a double major in theater arts and creative writing, and he hopes to pursue it. “There isn’t anything in the world that can mimic the feeling of being on stage.”

For Sanchis, who plays Jean, the experience has been enjoyable. The character was initially a male role, but Polak felt Sanchis was the best fit for the part.

“Jean is a character who is mainly in a dual with Berenger,” Sanchis spoke on reading through the play and learning her character. “I was fascinated with the character, because in the first act he has one personality, and in the next act where he appears its completely different, so it was refreshing and challenging as well.”

Sanchis’s background ranges from doing shows for 12 years, and she belonged to a group that helped put on shows to raise money for high school students. Thanks to this, she has had the opportunity to be on the stage, and she enjoys it. After doing theatre for 12 years, she met Polak, and auditioned for “Rhinoceros.”

“It’s enjoyable, and it’s something you can share with the community,” Sanchis added, “I’m learning so much from the cast.”

There are only two love interests in the play, and one is the affection Berenger has for Daisy, who is played by Neeta Lachmandas.

“Daisy makes a huge switch halfway through,” Lachmandas said about her character, “she’s very ditsy, blonde, and has a lot of one-liners. At first, she’s in and out of it, not really paying attention to anything, but mesmerized by whatever else is going on in the scene.” Later in the play, her character changes.

There’s a lot of fast-paced things happening at once on stage throughout, and Sanchis explained finding the balance. “Once you have that speed, you know where everything goes, and it’s fun to play. The speed is not as hard as I thought it would be, it makes things easier.”

The other love interest is between Mr. and Mrs. Boeuf. Mrs. Boeuf and the Logician in the show are played by Victoria Heather Fiore.

“I like shows where you get to do two different things,” Fiore said on playing her characters. “It’s the hand movements, how the Logician stands, and finding the body for it,” Fiore added that a lot of the character’s appearance comes from what the character is saying when there aren’t lines. “The Logician makes logic out of the illogical seem logical.”

“With Mrs. Boeuf, she’s described as fat, so costume-wise my costumes are very frumpy, so when I’m in these clothes I’m keeping in mind for what character I’m playing.” She described the Logician’s movements as being long and drawn out, whereas Mrs. Boeuf has quick, closed in movements, yet a panicked notion about her.

Fiore has been acting for 24 years, starting when she was 18. She studied abroad in London, and it was at Palomar that she met and made friends with the cast of Les Miserables, and this fueled her desire for acting in theater.

She auditioned at Palomar off and on for 20 years, and that’s how she got started.

In this play, Fiore finds it fun to act with so many people on stage at once.

John Polak, the Director of Palomar’s production of “Rhinoceros,” said he is excited to see the play take shape. The set is beginning to form, and Polak explained the direction he wants to take with it.

“Underlying it, there’s this absurdity, ‘Oh, it’s a Rhinoceros!’ but it’s not left or right, not Democratic or Republican. It’s about ideologies.” Polak described the meaning behind the rhinoceroses was to find out what each person thought their rhinoceroses were, and the things they dealt with in life.

A lot of times, our opinion is shaped by our culture, and the play presents this. “The play is about populism, ideology and conformity,” Polak said. “Think for yourself,” is one of the main themes of the play.

The event will run until Dec. 10. Tickets are on sale now, ranging from $10-$15 at palomarperforms.com. Experience the chaos as the cast breaks through the walls of morality, conformity, and abstract ideologies in the simple, yet illogical form of a rhinoceros.