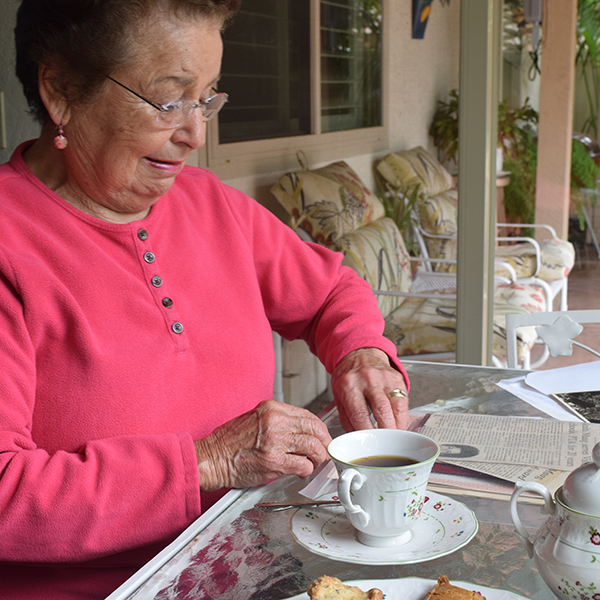 As it celebrates its 70th year anniversary, Palomar College is establishing itself as one of the largest community colleges in Southern California. However, not many remember its humble beginnings when it was just a few classes held at Vista High School; its current location on Mission Road being nothing but a flat expanse of grass surrounded by the empty fields of the Twin Oaks Valley.

At least one alumni remembers.

Though there are many differences between the Palomar of 1947 and the Palomar of today, Anita Maag, who was part of the college’s first graduating class in 1949, remembers the college for a lot of the same reasons it is valued today: for the friends she made and the opportunities it afforded her and her family.

As we spoke over coffee and an assorted plate of homemade cookies in her Oceanside home, the 86-year-old Anita shared stories and old photos that reflected a time when Palomar was attended mostly by veterans back from the war and some locals from the surrounding ranches.

“At Palomar, we had small intimate classes, and we knew everybody on campus,” She said, remembering a music class she took that only had five students. “The main thing I think that we had in those days was that the teachers all knew us personally. It was almost like being at a private school.”

Anita remembered taking music, photography, chemistry (which she didn’t like very much), and even writing a column for The Telescope newspaper called Kitty Korner, in which she detailed the latest news about the social lives of the closely knit Palomar students.

“It was just gossip,” she said laughing.

Students would all show up for classes, which went from 3:30-10 p.m., and hang out in one of the rooms they called “The Lounge,” mingling and talking about the upcoming dances occasionally held at the school. “We had such a unified thing that we would go in on Saturdays… and we’d clean windows and plant plants; try to spruce it up because it was our school, and it was nothing.”

It was at Palomar that Anita met her husband, Stanford, or “Stan” Maag, who fell for her when he first laid eyes on her drinking from a water fountain in her peasant blouse and long skirt.

She showed me the picture of the night he had proposed to her. “I was like a little girl,” she said nostalgically.

As we spoke, Anita remembered other details about her life on their family’s ranch at the base of the hills where Cal State San Marcos currently sits. Her family moved to the property from Santa Monica to get better access to food during the government rationing of World War II.

“When we lived in San Marcos… there was just a grocery store, a feed store, a gas station, and then the gas station owner had built a barn for meetings and square dances and that sorta thing,” Anita said.

The only other thing, she said, was a small church, where she and Stan got married. They were married for 60 years before Stan died in 2011.

“I remember being in the car with my husband, and we would sing,” she said, trailing off as her eyes became moist. “You’re making me think of a lot of memories.”

Anita was the first of three generations of the Maag family to attend Palomar. Her son Bob Maag, the second oldest of three, said that Palomar not only contributed to his life, but allowed his whole family to prosper.

Anita’s degree allowed her to get a job for Palomar as a bookkeeper, and another bookkeeping job in Camp Pendleton before her husband Stan came back from serving in the Korean War.

After coming back, Stan Maag worked as a splicer for the Pacific Bell telephone company, a job which Bob explained did not make a lot of money. Stan, who wanted to be an engineer, worked on his two-year degree from Palomar for 13 years; the reason it took so long being the long hours of overtime which often prevented him from completing the night classes he was enrolled in.

Finally, though, Stan earned his two-year degree, and was hired onto the company’s engineering department. “The difference that that made on our family and on our income was significant,” Bob said, explaining how the family’s financial success gave him and his siblings more opportunities. “Our ability to go to college, our ability to enjoy the lives that we’ve enjoyed as children was due to the education that he received at Palomar.”

For Bob, the contributions that the school made to the welfare of his family inspired him to volunteer for the Palomar College Foundation, working with them for 10 years before retiring this last April. The Foundation seeks and accepts donations which provide funds for programs that support students.

“My passion is to basically see that that same opportunity is afforded to students that want an education but may not have the means for that education,” Bob said, relating how a two-year degree was able to help his father, help him get ready to transfer to Cal Poly, San Luis Obispo, and help his son Tyler Maag complete the college courses he needed.

“For our family, it’s been a true difference maker, and you can hear that from me but you can talk to so many people and it’s the same thing. It’s the same story.”

Bob left the foundation in April because of a job offer he received from Banner Bank. Our interview took place in his newly acquired office, which he was still in the process of setting up. As we spoke, I couldn’t help but think about the contrast between the nice office in which I currently sat, and the basic life Anita’s father was able to provide her and her siblings.

“I’ve had a very good life,” Anita said at the end of our long conversation, “and I think a lot of it has got to do with the fact that I did go to Palomar and get an education.”