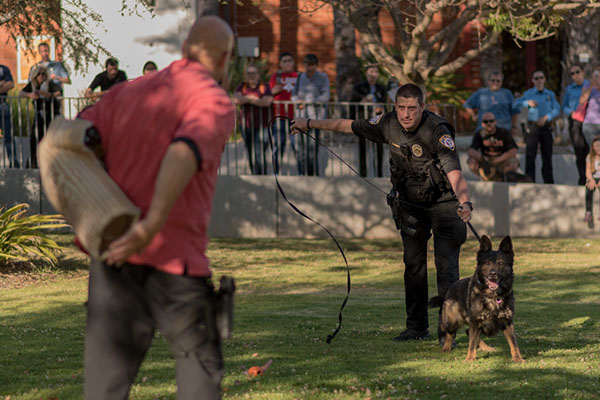 Emergency responders came out to connect with the Palomar community in an inaugural event hosted by Campus Police.

The Public Safety Community Outreach event was put together by officer Gerard Perez of the Palomar Police Department on April 5 in the the SU Quad. Attendees interacted with officers from police departments all over San Diego county while listening to live jazz music, eating cake, and seeing events such as an attack dog demonstration and a helicopter landing on the football field.

According to Perez, the main goal of the event was to allow for police officers to interact with community members in a friendly environment.

“A lot of times the students or the people in the community don’t get the opportunity to talk to us on a one to one basis,” Perez said. “In this environment, it’s very positive, everyone’s relaxed, so this gives everyone an opportunity to put their guard down.”

“It’s just to show the humanistic side, if you will, of what we’re all about, and that were here to benefit the community,” said

Police Chief Mark DiMaggio said the event was to show that the community and Campus Police are partners in keeping everyone safe.

The event was not only aimed at connecting the police with the community, but to allow future police officers to get a taste of the field.

Palomar’s GEAR UP program, which stands for Gaining Early Awareness and Readiness for Undergraduate Program, invited 400 high school juniors and seniors who showed interest in law enforcement careers through a survey.

Amongst the high school students in attendance, Diego Mendoza, a 17-year-old Escondido High School student, said the event helped him narrow down what he wants to pursue at Palomar.

“Right now, we went to go ask about the Police Academy, and she basically just outlined everything,” he said.