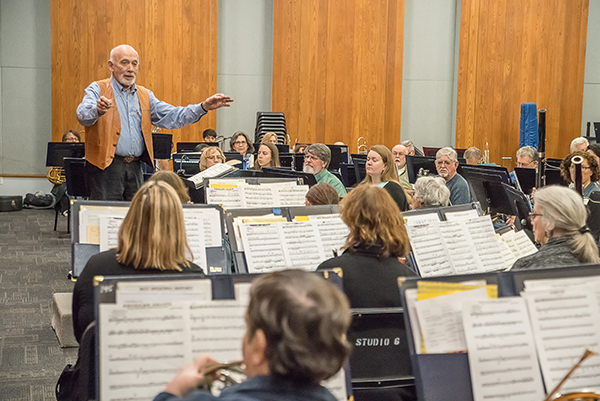 If there is anyone who can coordinate a band of over 70 instrumentalists, it’s Palomar’s own Kenneth Bell.

With more than 300 concerts under his belt, Professor Bell has conducted the Palomar Pacific Coast Concert Band since 1992. His newest concert, “Heroes and Heroines,” features Beethoven’s Fidelio Overture, an orchestral piece he holds dear to his heart.

Bell explained, “For the ‘Heroes and Heroines’ performance I’m choosing pieces where heroism, or courage is exemplified in the human spirit. Fidelio is an incredible opera, and the only one Beethoven wrote. The Overture is the centerpiece of the performance.”

He instructed French horn at the Armed Forces School of Music and was a narrator working with the San Diego Symphony. As a Basso-Cantante opera singer he’s played more than 80 leading roles, working with the Chicago Opera Theater, New York City Opera and San Francisco Spring Opera.

“I’ve followed my interests, the nature of adventure and the challenges that were brought to me. I pursued my interest in opera with 40 different opera companies,” Bell said.

With his extensive background of experience, Bell knows what needs to be taught and tailors the music to his player’s skill level. The 70 musicians in PPCCB is a challenge Bell’s always pleased to tackle.

“The three elements of music: rhythm, melody and harmony; you have to make all those work with people from different backgrounds and skill levels,” Bell said. “My job is to bring them together in an organized and disciplined way to make these incredible sounds. It’s an exciting, difficult process.”

The band performs four concerts a year, two in the spring and two the in fall, with only 10 weeks of rehearsals in between. It’s demanding work Bell said, but it’s work he lives for.

“The love of making music is what keeps me going,” Bell said. “I want to inspire those around me, get the players to understand the reality and beauty of what they’re accomplishing.”

“Heroes and Heroines” will debut from 7-9 p.m. on Feb. 24 at Palomar’s Brubeck Theatre.