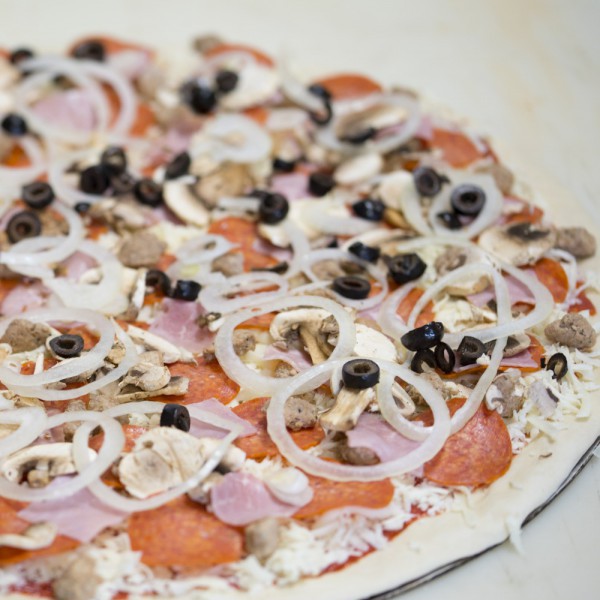 Blackstone Pizza: Fresh pizza among other delicious food for a reasonable price.

Blackstone Pizza does everything fresh, they make their own cheese, crust and sauce; so you don’t have to worry about eating mushy crust or stale cheese.

Blackstone Pizza has a wide variety of pizza styles that could suit the craving of any pizza connoisseur. They also serve salads, sandwiches, wings, and fries.

Located down the road from Mission Hills High School in San Marcos, Blackstone is a short drive from campus.

It also provides three satellite and cable televisions so you can eat some good pizza and watch the big game.

They also host events for basketball and football teams. So if you can’t find a restaurant that will host your team’s post-game celebrations, you can give them a call and they will accommodate your team’s needs.

Blackstone Pizza has been in business for over five years and loves to serve the community and the surrounding business with pizzas, Johnny Jones/ The Telescope.

There are also several types of micro-brewed and domestic draft beers such as Ballast Point and Heineken.

If you’re not into beer, Blackstone Pizza also serves wine.

Sam Hayawi, manager, said the best time for college students to come in is before five o’clock because that they usually have a big rush between five and seven.

Blackstone Pizza has many different types of specialty pizzas, such as the “Da Island Style”, which is like a traditional Hawaiian style pizza except instead of Canadian bacon, it is made with Kalua pork.

“Well, it depends,” Hayawi said. “We have something for all the tastes. If somebody wants a meat lover, we have a meat lover pizza or a Grrizzz which is a bunch of meats. But in my personal opinion, I like the Shangri-La and the Grrizzz which is the most popular ones.”

The restaurant might be a little small, but Hawayi has said that they can accommodate up to 42 people in their dining area at one time. But for catering, they can make 20-30 pizzas for up to 200 people.

Blackstone Pizza can accommodate almost any craving you have. Whether you are looking for pizza, beer, sandwiches, or salad.

If you want to get a slice of pizza after class, good news is, it is just down Mission Rd. Blackstone Pizza is located on 574-A East Mission Road, San Marcos.