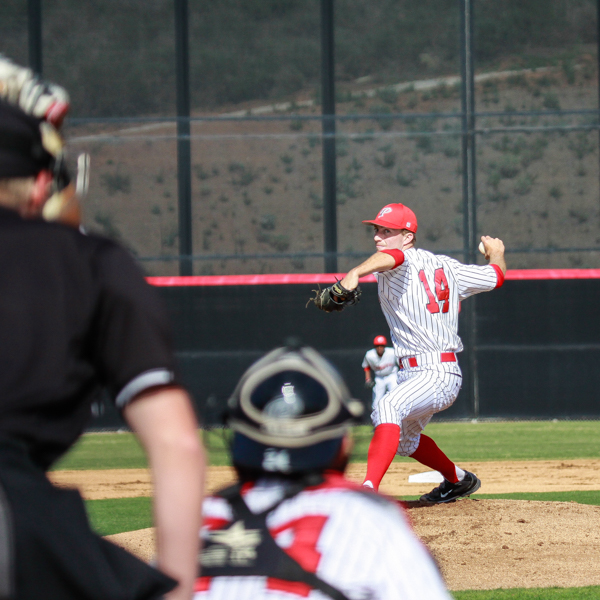 Comets score early but lose it late to Glendale

It was a high-scoring game in the Palomar baseball team’s tough loss to the Glendale Vaqueros (now 9-2) on Feb. 23, which ended with a final score of 14-6.

“I’m looking forward to our kids making adjustments, where we’ve struggled all year.” said Comets head coach Buck Taylor after the loss, their seventh of the year.

The game started with Palomar’s offensive splurge in the first inning, scoring five runs, with the first five hitters in the lineup reaching base. Then Palomar’s third basemen/right fielder, Mitch Gallagher, scored one of his two runs from first on a throwing error by Glendale’s first basemen in the fifth inning. Gallagher also reached base three times out of four plate appearances.

The Comets had several hitters in the lineup reach base, with a total of six walks over the course of the game.

Palomar shortstop Casey Henderson, finished the game strong, going 2-5 in the three spot of the lineup, getting a hit his first plate appearance and coming around to score the third run of the game for the Comets.

Matt Wezniak started the game in the cleanup spot batting DH for the Comets, reaching base two out of three plate appearances while also scoring a run, and ended his time in the game on the mound pitching an inning and two-thirds in relief without giving up a hit.

Palomar’s first basemen Marc Sauceda, also came up big in the first inning hitting a bases-loaded double down the left field line, driving in the runners at third and second and the runner at first scoring on an error, putting three of the five runs scored in the first inning. Sauceda finished the game going 1-4 with two RBI’s, the most runs by a hitter in Palomar’s lineup on Tuesday.

Although Palomar’s pitching was a bit rocky, Carter Johnson still struck out three of the Glendale Vaqueros’ in only one and two thirds innings, the most by all of Palomar’s pitchers Tuesday afternoon.

When coach Taylor was also asked what his goal was for the season, he said, “To get better. Not to win a game, not to be a champion. It is to do the little things much better.”

The Comets are heading in to their next game on Saturday against Grossmont with a 5-7 record.

Tuesday’s game against the Glendale Vaqueros was the only matchup between these two teams will meet this season.

The next game for the Comets will be a home game on Saturday, Feb. 27 at noon against Grossmont at the new field located by parking lot 9.