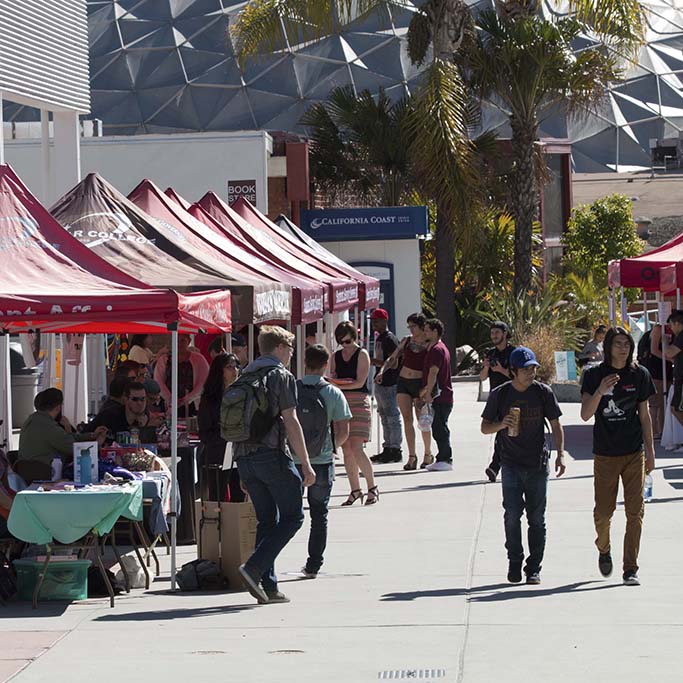 “In this event, we have all of the clubs that want to come up and meet (with) people, introduce themselves, and fundraise,” said Armondo Contreras, the chairperson of the Inter-Club Council.

Representatives from many of the campus’s clubs set up booths to promote awareness, engage with students, and recruit new members.

Club Rush is hosted by the Office of Student Affairs, which is the organization on campus that helps coordinate events, issues student activities cards and oversees the Student Union buildings.

“This semester wasn’t the best turnout that we’ve ever seen,” Lindsay Kretchman said. Kretchman is the activities director for the Office of Student Affairs.

“But this is also one of the first years where we’ve made it into a two-day event,” she added.

Eleven clubs were represented at the club on Monday, and 12 clubs attended on Tuesday, according to Kretchman.

The Child Development Club was one of the clubs represented at Club Rush. Currently the largest club on campus, according to Sidney Matlock, the club’s president.

Sometime in April, the club will be hosting an event that discusses human trafficking and its effects on the community. The event will be free and open to the public, according to Matlock.

“We talk about the stuff that no one wants to,” Matlock said.

Sahrah Emadi, a member of the club, calls it “amazing, self, accepting and helpful.”

Palomar’s Intervarsity Christian Fellowship was also there. The club is a chapter of the nondenominational, multi-campus ministry, according to the group’s website.

“We have Bible studies. Anybody with any faith background is welcome to come,” said member Daniel Hernandez, adding that the group meets at noon on Mondays, 11 a.m. on Tuesdays and 3 p.m. on Fridays at the flagpole.

Other clubs on campus have a more specific focus, including the Palomar chapter of the Gemological Institute of America.

“I think my favorite thing about being in the club is meeting new people, and seeing San Diego county,” GIA Vice President Erika Trinh said of the meeting.

Although the turnout wasn’t the best that the OSA has seen, Kretchman said the event is still an excellent opportunity for clubs to advertise and recruit new members.

“I’m always happy to have any of the clubs there that can be there,” said Kretchman.